The Jetsons were right: movies have been predicting tech since the 60's

Do the creative visionaries at Google and Apple spend a lot of time at the movies? There's plenty of evidence that they do 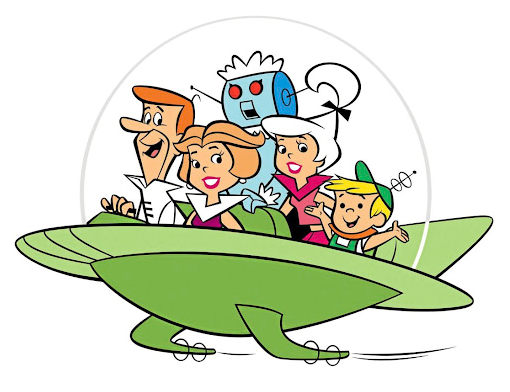 The Jetson's cartoon from the 1960's predicted several technological advancements we enjoy today.

In his weekly HBO late-night show, British comedian John Oliver has a section called "and now this", which often focuses on the idiocy of US television presenters. In one episode, Oliver made a point about how seemingly anachronistic it is that whenever discussing advances in technology, US newscasters love to invoke the name of The Jetsons, the 1962 Hanna-Barbera series.

The thing is, the Jetsons correctly predicted a number of inventions we take for granted as part of everyday modern life. George and Jane and their kids used tanning beds, video chat, an iPad prototype called a televiewer and employed the services of a robot vacuum cleaner.

Here's a look at some of the technological phenomena that other movies and shows have predicted over the years - you know, like The Jetsons...

I'm not enough of a "trekkie" to get into a debate about which inventions come from the world of the TV series and which come from the film franchise but it's enough to point out that Gene Roddenberry's much-loved sci-fi universe provided prototypes for the smartphone, tablet computers, a universal translator and 3D printing.

It's no accident that Stanley Kubrick, the most fastidious of directors, would have produced a film that still stands as one of the most successfully prescient examples of technological prediction in cinema.

From Skype and FaceTime video chat to tablet computers and the age of Siri, Kubrick and collaborator Arthur C Clarke got a lot right and thankfully, so far, a few things wrong - computers haven't started killing us just yet.

Ridley Scott's Philip K Dick adaptation is still one of the great films of the genre and with the eagerly anticipated sequel due for release this year, you can be sure geeks are getting ready to see what it might suggest about future tech. In 1982 Blade Runner gave us Skype, digital advertising billboards and retinal scanning.

Could the 'Blade Runner' sequel give us a real glimpse into the future?

Blade Runner 2049, the most anticipated fanboy film of the last three decades and sequel to Blade Runner, is produced by original director Ridley ...
Lifestyle
4 years ago

In pursuit of Sarah Connor, the evil Skynet releases drones. The other long-term effect of James Cameron's film was to help steer its star into the California governor's mansion; you could argue both had tragic repercussions.

He's a nice enough piece of hardware once you get to know him, but this film's main character is an experimental military robot who gains more humanlike intelligence after being struck by lightning. Today's military robots are used to defuse bombs.

We don't have hover-boards yet, but the wearable tech Marty McFly discovers on his trip to the future is a reality thanks to Google Glass and VR headsets like Oculus Rift.

Paul Verhoeven's Philip K Dick adaptation features driverless cars, which as we know are only a few years from driving us nuts.

Will Smith thinks Gene Hackman is a paranoid nutcase in Tony Scott's film about government surveillance. Hackman couldn't have known then what we and Edward Snowden know now about the capabilities of governments when it comes to spying on communications, but the film makes a pretty convincing prediction nonetheless.

The third Phillip K Dick adaptation on this list, Steven Spielberg's film used the most advanced technology of its time to portray a world that was closer than we thought. No, we don't have predictive policing but we do have gestural computing, driverless cars and targeted advertising.

Mike Judge's film about a not-so-smart guy in 2006 who is put to sleep for five centuries only to wake up in a world where he's a genius and the world is led by a man with a negligible IQ got one thing wrong - it only took 10 years for the world to enter the age of idiocy.

A world in which rich people live on a space station while everything goes to hell on Earth. With Elon Musk looking to make a colony on Mars a reality, how far are we from this situation? Also, the exoskeleton Matt Damon uses is a reality in the world of defence contracting where robotic suit technology helps soldiers carry bigger guns and hardware into battle.