Do you have what it takes to live on Mars?

Elon Musk's plan to colonise Mars by 2050. Just how ready are you for life on the Red Planet, asks Richard Jones 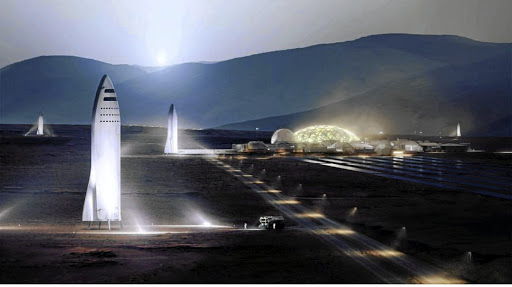 Elon Musk's Mars City. The sky on Mars blue at dawn and dusk, and red during the day.
Image: Instagram@elonmusk

In 1971 a young man who went by the name of David Bowie wondered aloud on whether there was life on Mars. Could human life be supported by the Martian landscape?

More than 40 years later, a UK scientist is helping to put Bowie's planetary question to the test. Samuel Payler, a doctoral candidate at the UK Centre for Astrobiology at the University of Edinburgh, was part of a crew of six Nasa-backed researchers who emerged earlier this year from a remote dome in Hawaii after spending eight months practising for life on Mars.

The conditions in the dome were designed to emulate a long period of time spent on the Red Planet.

On Friday SpaceX CEO Elon Musk gave a "major" update on his plans to colonise Mars at the International Astronautical Congress in Adelaide, Australia. His talk added to the one he gave at last year's IAC conference in Mexico, when he revealed the full architecture of his plans to send thousands of people to Mars.

Mankind is closer to exploring Mars than ever before, so it's time to ask: Do you have what it takes to be among the first humans to live on the fourth rock from the sun?

You've just travelled 54.6million km for an estimated 260 days and now you have to park the ''car".

Richard McGuire Davis jnr, assistant director for science and exploration and co-leader of the Mars Human Landing Sites Study at Nasa, says any spacecraft attempting to land on the surface of Mars would ''have to dive deep into the Martian atmosphere and skirt closer to the surface than we've done in the past".

Past ''landers" have been too heavy to lower themselves down to this level, so any space craft would have to be as light as possible, a tough issue to comprehend when you have to bring your house on the journey. This means that you may have to travel without modern ''luxuries" like parachutes or airbags.

Musk says he wants to set up a colony of a million people on the planet by the 2050s. But how will this Martian city look?

Nasa came up with a concept for early dwellings on the planet. Called the ''ice home", they're inflatable domes covered in ice to protect residents from extreme temperatures and high-energy radiation.

Chris Hadfield had a 32-year-career doing something many people dream of but only a select few ever get to do.
Lifestyle
4 years ago

The bouncy igloos would contain a kitchen, living quarters, a greenhouse for you to grow your own vegetables and a library.

Nasa says the homes can inflate and cover themselves with ice extracted from the Martian landscape in about 400 earth days.

Water can be extracted from the Mars soil by heating the surface until it evaporates - so we'll be covered on that front. But the stored food we bring from Earth will serve only as emergency rations, which means the astronauts will have to try to eat as much freshly produced food as possible.

And it's also likely algae and insects will be part of the diet.

In 2011 six men emerged from a windowless capsule based in Russia having been stuck inside their spaceship simulator for 520 days.

Four out of the six endured debilitating sleep problems - including one crew member who was living on a 25-hour day, meaning every two weeks there came a point when it was the middle of the day for everyone else, but for him it felt like the middle of the night.

A UK survey of 2,000 people by National Geographic found that almost one in three people would consider living on Mars for a while. But did they consider the probable brain damage?

Any mission to Mars would inevitably result in exposure to cosmic radiation that's been shown to cause cognitive impairment in rodents and possibly in astronauts engaged in deep space travel. These galactic rays would increase the risk of cancer among inhabitants.

Rocket trips come down to earth, with Musk

There'll also be some bone-density and muscle-density loss but years of research by Nasa seem to have solved this issue. Similar drugs to the ones used on the International Space Station and an intense exercise regime could help humans from wasting away.

It almost goes without saying that being so far away from home is going to be a disconcerting experience. From the moon, Earth is still very much visible; from Mars, the rock you used to call home will merely be a dot in the sky, exactly as the red planet looks down here.

Space Psychology and Psychiatry authors Nick Kanas and Dietrich Manzey believe that being so far away from the nurturing aspects of life on Earth "might be associated with a broad range of individual maladaptive responses, including anxiety and depressive reactions, suicidal intention, or psychotic symptoms, such as hallucinations or delusions".

A round-trip human expedition to Mars, using current technology, could take two to three years. If you're the homely type, best not apply.