'The Man with the Iron Heart': this war film falls flat 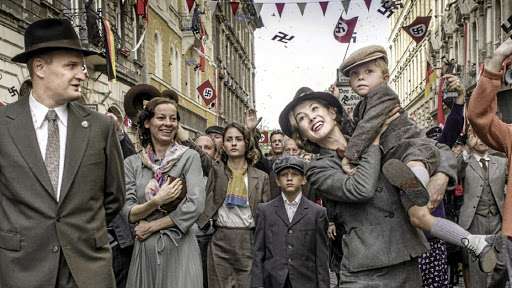 Rosamund Pike stars as Lina Heydrich in 'The Man with the Iron Heart'.
Image: Mars Films

HHhH, Laurent Binet's 2012 novel about the assassination of Nazi security chief Reinhard Heydrich, was critically well received for its breezy, self-reflexive and disarmingly humorous approach to its macabre subject matter.

Heydrich, the originator of several atrocious and murderous milestones in the Reich including Kristallnacht and the Final Solution, was neither charming nor likeable and his murder by members of the Czech Resistance was one of the more celebrated acts of opposition conducted during the war.

In The Man with the Iron Heart, French director Cédric Jimenez strips Binet's novel of its self-referential humour and splits the story into two sections - one focusing on Heydrich (Jason Clarke) and his rise through the ranks of the Nazi party and the other on Czech soldiers Jan Kubis (Jack O'Connell) and Jozef Gabcik (Jack Reynor) who are parachuted into Czechoslovakia and tasked with carrying out the assassination.

While there's plenty of dramatic potential in the story and Jimenez demonstrates a dramatic visual ability, the film suffers from a crisis of identity that's the result of forgoing the unique aspects of its source material in favour of a straight play that leaves you feeling it's not offering much in the way of a new take on an old story.

WATCH | The trailed for The Man with the Iron Heart

Clarke, in spite of the burden of an unconvincing German accent, does a decent job and he's given strong support from the icy Rosamund Pike in the role of Frau Heydrich. However, just as we've spent 50 minutes immersed in the story of a Nazi, and getting interested in the tension leading up to his imminent demise, we're extracted from Heydrich's saga and drawn into the other side of the tale, which isn't quite as compelling because of its similarity to so many other stories we've been exposed to. By the time the two narratives converge, the drama and intrigue have been too deflated for us to care.

It's not quite that the film is the same as hundreds of other war films, but rather that it so disappointingly fails to deliver on its unique potential. What could have been is so evident that it makes what is so average and forgettable. Binet's book and the story of Heydrich both deserve a better film.

WHAT OTHER REVIEWERS SAY:

• It doesn’t take advantage of its interesting cast. It simply doesn’t work. — Mikel Zorrilla, Espinof• A good cast fight a losing battle with a film that feels muddled and lacking in tension. — Allan Hunter, Daily Express• A flat portrayal of Heydrich but an exciting account of his assassination, it’s a weaker film than previous versions of this story. — praguereporter.com

Movie Review: 'Suburbicon' is a pointless waste of talent

Directed by George Clooney, this dark crime comedy set in the 1950s misses the mark on almost every level
Lifestyle
3 years ago

Movie Review: 'The Mountain Between Us' is a plane crash of a film

Shot in Canada in freezing conditions, the scenery is the only authentic thing about Idris Elba and Kate Winslet's romantic survivalist drama
Lifestyle
3 years ago
Next Article