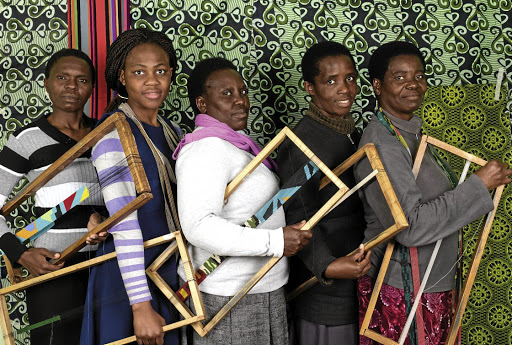 In 2011, Johannesburg artist Joni Brenner saw a strip of loomed beadwork made in Bulawayo, draped it around her neck and asked if it could be joined to make a necklace.

When she wore her commissioned necklaces to the 2011 FNB JoburgArtFair, many people admired them and requested their own. The necklaces were made by the Marigold co-operative, which specialises in loomed beadwork. The co-op was established in 1992 with about 20 women, most of whom had belonged to groups known as "School Leavers' Clubs" where crafts and entrepreneurship skills were taught to young people who were unable, for various reasons, to complete their schooling.

In Marigold's first decade or so, clients and commissions were plentiful. But Marigold's fortunes, mirroring Zimbabwe's waning economy and complicated political history, declined as resources and clients gradually ceased to be steadily available. People drifted away from Marigold in search of other employment.

The internet has been abuzz following the Hollywood premiere of the wildly-anticipated Black Panther movie earlier this week. The already historic ...
Lifestyle
3 years ago

However, three women - Siphiwe Dube, Sifiso Mathe and Teresa Nkomo, founder members of Marigold - managed through sheer persistence to save their co-operative.

Dube recalls 2008 as a low point in the history of Marigold, where every tiny bead that fell to the floor was gathered up for use rather than being swept outside.

The looming of beads is a practice found in other parts of the world but is not a technique familiar to Southern Africa.

Indeed, the origin of looming in the Bulawayo area is as yet not fully explained. But as the demand for the necklaces began to grow, more beaders who were familiar with the technique were called in.

No one involved in the project imagined a sustained future for these necklaces, but the work has continued. Single-coloured necklaces soon became two-toned, followed by endless possibilities and combinations.

"The beads are alive," Dube has observed. "They tell you which ones can be combined." 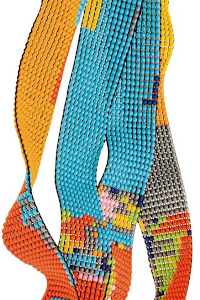 This complex necklace is based on scientific data generated by the Southern African Human Genome Programme. It was made by Marigold beader Ridia John Samson, and took more than a week to complete.
Image: Liz Whitter

As the collaboration progressed, Brenner has developed shifts in the designs and sends good beads in an unending array of colours to the Marigold studio.

Marigold contributes to the combinations of design and colour and the continued refinement of production. Today, Marigold is once again 16 women strong.

Marigold beads attract their own following; they create their own future.

Most recently they have been noticed by Alisa LaGamma at the Metropolitan Museum of Art in New York, who arranged for the book to be launched there.

An uncertain future is a burden and weighs heavily, but the work itself, rooted in improvisation, has an in-built potential for Marigold, and for Brenner, to keep going and discover the surprising places to which the shared journey leads.

JOURNEY OF A NECKLACE

Joni Brenner discovered that the source of all Czech and Japanese beads in Johannesburg was HK Gokal, a family emporium directed by third-generation owner Nipun Gokal, which at the time was still operating from the Market Street premises where it opened in 1945. When HK Gokal closed in 2014, Czech and Japanese seed beads in wholesale quantities ceased to be available pretty much throughout Johannesburg.

Thanks to an introduction from Gokal, Brenner now sources Czech beads from Mahommed Essack's store, the Phutumani Bazaar, in Durban. It can take a week or more from placing the order to the beads' arrival in Johannesburg. The beads are then collected from Brenner's apartment in Johannesburg and driven 850km to a central depot in Bulawayo, from which they are collected and driven to the Marigold studio.

The making of a single loop can take anything from a day to more than a week, depending on the length and complexity of the pattern. A single necklace contains approximately 5,000 beads and about 600 lines.