Julia Anastasopoulos' characters Suzelle and Tali are pitch-perfect parodies of South African stereotypes. Andrea Nagel chats to her to find out what next for the YouTube poppie and TV kugel 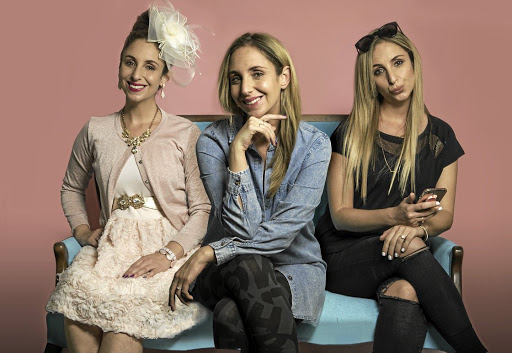 Alec Baldwin's Donald Trump, Sasha Baron Cohen's Ali G, Michael de Pinna as the leopard-skinned buffoon in the "Yebo Gogo" commercials, Pieter Dirk Uys as Tannie Evita Bezuidenhout ... I, for one, find parody the most hilarious form of comedy, and South Africa is rich with situations and people to lampoon.

It's the familiarity and predictability of the actions and words of public figures and stereotypes that make the parody so enjoyable, so mockable. "Booyakasha!" and "Respek" in the case of Ali G.

"I imagine that puckering butthole of a mouth" is how Baldwin describes his preparation for becoming Trump - who has endless mannerisms and oft-used phrases to ridicule. "Baldwin's Trump is mimicry born of disgust," writes Chris Jones in the Atlantic.

Julia Anastasopoulos, better known as Suzelle DIY, has created a TV personality paradox, a character that people love to hate, the locuacious Jewish ...
Lifestyle
3 years ago

And we could always count on Tannie Evita to use the words "aikona" and "skattie" in equal measure, to show her multiculturalism and commitment to Project Rainbow Nation. After all, she says, "I am not white, female, Afrikaans, icon or aikona, octogenarian, designer-democrat, right-wing, conservative or marginalised. I am South African, skat."

But until the manifestation of the next great lady of Afrikaans-accented-English-comedy, there were not many females on the local parody scene (askies Mevrou Bezuidenhout).

Enter the person who has, between 2014 and now, become a household name - at least as her character Suzelle DIY.

"There's it." I've been hearing that phrase around the house for the past few years, mostly when my daughter has just completed one of the recipes, home-improvement tutorials or oil changes on the car that Suzelle demonstrates on her ever-popular YouTube installments - "because anybody can".

For four years, the family have sat together on the bed and watched Suzelle teach the nation how to make a braai pie, or peel a lot of apples, or make a piñata. And of course, when she doesn't get it right there's that infamous involuntary "ooh fok".

And now there's Tali-babes, actress Julia Anastasopoulos's next incarnation. Tali is an Instagram influencer with her own show on Showmax that launched at the end of last year - a wedding mockumentary called Tali's Wedding Diary.

Few South Africans can say they don't know at least one Sandton kugel, defined by the Urban Dictionary as "a materialistic, wannabe-sexy Jewish woman who belongs to a specific subculture of wealth and style, with affected mannerisms and a nasal way of talking. The term is used by both Jews and Gentiles in South Africa, and even by kugels themselves."

And the kugel's particular brand of "middle-class problem" is great fodder for a mimic like Anastasopoulos.

But, of course, you have to get the balance between parody and stupidity exactly right or you run the risk of overdoing the characterisation. I've seen many an amateur comic fall flat by pushing the satire too hard. Anastasopoulos's Tali is perfect.

Unlike Baldwin on Trump, Anastasopoulos obviously has a soft spot for her characters. When I tell her that my daughter is crazy about Tali she says, "Um, I don't know if that is such a good thing."

Tali is very self-centred and narrow in her views. It's part of the comedy that her biggest issue in life is having a bad hair day, or finding out that a friend has a more impressive wedding invitation, or that her wedding dress makes her look like a sausage. "I hope she's learning how not to behave," Anastasopoulos adds. "Suzelle is a much nicer person.

"Tali existed even before Suzelle," says the actress. "I grew up in Johannesburg and went to high school there. I've known a lot of Talis."

Last year Anastasopoulos married filmmaker Ari Kruger - her director on the Suzelle DIY skits - who is Jewish. "Now I have Tali-babes everywhere," she says.

Together they have started Sketchbook Studios, a creative production company specialising in original content. Anastasopoulos is also an accomplished graphic designer and illustrator.

''We came up with the idea for Tali's Wedding Diary while we were engaged - there's just so much to laugh about while planning a wedding," she says. And Anastasopoulos is expecting a baby next month, so naturally there's another project in the pipeline for Showmax and the Tali series.

But, she says, Suzelle isn't going anywhere. "I know Suzelle better, I've practised her so much and there's still so much I want to do with her. There's a cookbook coming out in October, and we've been filming more YouTube slots - from the chest up while I've been pregnant."

Suzelle DIY invited Tali Babes onto her YouTube show so that they could make a wedding cake ahead of Tali's big day.
TshisaLIVE
3 years ago

Does she ever get confused about who she really is: Julia, Tali or Suzelle? "It does get confusing, but they're all so different. Of course, my teams for each show respectively are my family. Gina Collins, who plays Marianne in the Suzelle DIY skits, is my high-school friend. We both studied drama at UCT. My sister on Tali's Wedding Diary is my real sister and then there's Kate Normington, a great actress, who we roped in to play my mom in the show. There's nothing better than playing with your friends."

Parody and satire often have a message to convey. Suzelle, says Anastasopoulos, riffs off the abundance of weird people doing DIY inserts on YouTube and makes that funny and local. Tali highlights the over-privileged and self-obsessed world of a particular kind of South African.

"My job as a comedian is to be a mirror. Sending a message is not my main objective but I hope the character makes people think and that she's a catalyst for change or a great entry point for discussion." But mostly she's just funny. Even for the people who are laughing at themselves.