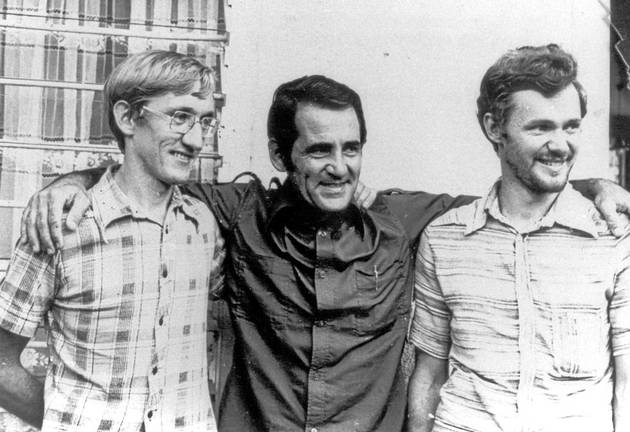 Photographs have emerged of Daniel Radcliffe, star of the Harry Potter films, transformed into the style of the 1970s to portray ANC activist Tim Jenkin.

Adelaide in South Australia is the setting for the drama-filled South African story, based on a book by Jenkin about his daring prison break from Pretoria Central Prison.

Jenkin went on to become part of the Operation Vula network which ensured encrypted communication between local activists and leaders of the then-banned ANC in exile.

Another fan had a classic dilemma - what do you say to a famous actor?

when daniel radcliffe shook my hand I apologised about how hot it was???? out of everything i could of said 💔

TimesLIVE reported that Radcliffe was tipped to play the role back in May 2017, when Jenkin said he hoped the film would actually make it to the big screen.

The Capetonian, with Stephen Lee and Alex Moumbaris, walked out the front door of Pretoria Central prison in 1979 after cutting wooden keys in the prison workshop. The three, jailed for terrorism, subsequently fled to Europe.

"I will get excited when I am sitting at the premiere about to watch it for the first time," Jenkin told TimesLIVE then. "It could fall through at any moment, so I don't want to get my hopes up too high."

The movie is expected to take its audience through the painstaking work the trio put in to make keys for 10 doors out of wood right under the noses of the prison guards.

It is based on Jenkin's book, Inside Out: Escape from Pretoria Prison.

Is the internet going to grow or kill the SA film industry?
News
2 years ago

The Cape Town Film Market and Festival is the first major industry and audience festival of its kind in the Mother City since the demise of the ...
Lifestyle
2 years ago

Lucia Raadschelders, who has died in Johannesburg at the age of 64, ran safe houses for the ANC in Swaziland and played a key role in Operation Vula, ...
Opinion & Analysis
2 years ago