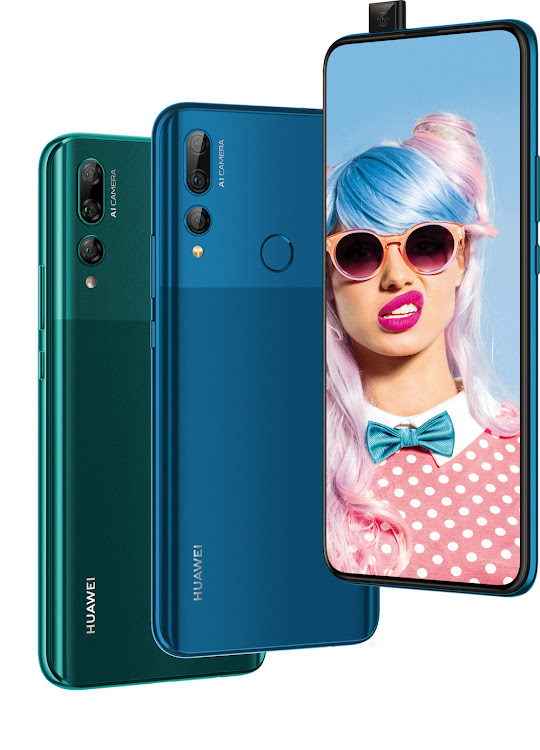 The new Huawei Y9 Prime 2019 is the first smartphone in SA with a front-facing, pop-up camera. The 16MP selfie cam automatically pops up within one second when you want to take a selfie, and retracts when you are done.

The camera has artificial intelligence (AI) capabilities that enhance an image from eight different scenes, and allows you to retouch the intensity. This means you can have fun snapping away at any angle, resulting in the perfect selfie every time. The 3D Portrait retouching works on both front and rear cameras, for studio-quality lighting effects that make you look your best at any time.

The unique eye-catching design features a durable front-facing camera that has been tested in pretty impressive conditions: it can open and close 100,000 times without fault, which is the equivalent of opening it 30 times a day for nine years; it can withstand up to 15kg of pressure; and can handle harsh environments between -20°C all the way up to 60°C.

As seen on new flagships in the last year from Huawei, the rear camera comprises a triple lens setup, a 16MP+8MP+2MP, to deliver the perfect shot. The 8MP is a wide-angle lens lets you see the bigger picture in one shot, making it ideal for capturing travel photos, or posting on Instagram Stories.

Huawei’s 6.59-inch Ultra FullView display design allows for uninterrupted viewing of YouTube or Netflix videos, due to the lack of a notch.

Huawei has packed premium features into the Y9 Prime 2019, with an affordable recommended retail price point of R5,399. The price also includes one free accidental damage replacement on the pop-up camera, valued at R799.

The handset will go up against Samsung’s A Series, and specifically the A80 in relation to the new style of camera, which features a pop-up camera but not in the same style as the Y9 Prime 2019.

The Galaxy A80 makes use of the rear camera on the front as well, by opening upward, and flipping out to face forward so it becomes the selfie-camera.

It has mechanical components that slice and rotate, which is easier to break and malfunction, as seen on a couple of review units online. The slicing component uses a single motor, which could cause a jitter, unlike the Y9 Prime 2019, which has the front camera popping up. This means it has less of a chance to malfunction, considering it was already tested for 100,000 uses.

The A80 has a slightly bigger screen at 6.7 inches but a smaller battery with a capacity of 3700mAh. The one component on any smartphone that uses the most battery life is the screen, so compared to the Y9 Prime, which has a slightly smaller screen and bigger battery at 4000mAh, you will get better efficiency on the Huawei.

For those who prefer a traditional 3.5mm headphone jack, the Y9 Prime 2019 still has it, whereas the A80 has removed this feature.

If you consider the camera, screen, battery, and headphone jack alone, the Y9 Prime 2019's recommended retail price of R5,399 offers great value for money, especially with the closest competing A80 at an expensive R11,999.