Some wore paper bags over their heads at Africa's first Pride march almost 30 years ago, but even that was a statement, writes Palesa Buyeye 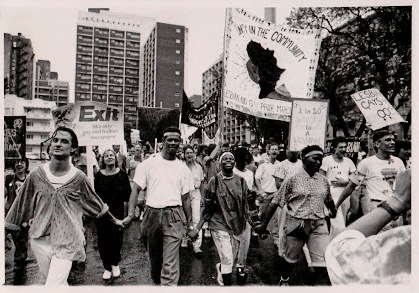 SA's first gay pride march in 1990, which was instrumental in SA becoming the first country to include the rights of the LGBTQ+ community in the constitution.
Image: David Penney/Donne Rundle Collection/GALA Queer Archive

Years later his words are still relevant. Let's not forget that Uganda proposed the death penalty for homosexuality.

This year, Pride celebrates 30 years of LGBTQ+ activism. But where did the movement begin and how far do we still have to go?

"The late Simon Nkoli first had the idea for the Pride march," says Cameron, remembering the Saturday that would be instrumental in influencing SA's new constitution.

"Simon was a fun-loving person. He was serious politically, a dedicated activist who had a deep sense of principle about activism, but he was also naughty in a good sense. He conceived the first Pride as a political statement but also as an opportunity to assert gay rights, for self-expression and to have fun - a combination of everything Pride should be." 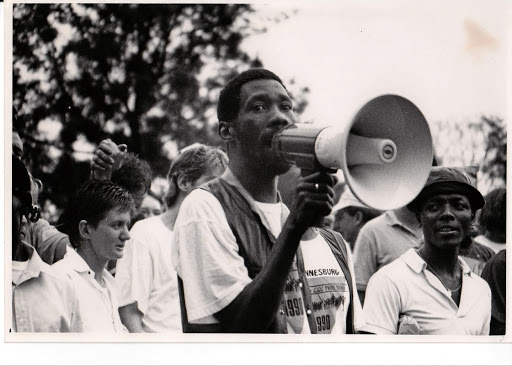 Sebokeng activist Simon Nkoli came up with the idea for a Pride march in Joburg.
Image: Supplied

Nkoli was an influential figure in the anti-apartheid struggle and a leader of the Gay and Lesbian Organisation of the Witwatersrand (GLOW).

Nkoli, with Cameron, Beverley Palesa Ditsie, Phumzile Mthethwa, Donné Rundle, Terry Myburgh, Roy Shepherd and others were tired of living in fear of repression and persecution, tired of feeling shame on the basis of their sexuality. They formed alliances with churches, gay organisations, political activists and members of the queer community to organise the first Pride Parade in Hillbrow, Johannesburg, in 1990.

In a way, this led to SA becoming the first country to write the rights of the LGBTQ+ community into its constitution.

Cameron, who played a leading role in organising the march, reflects on the feelings it evoked.

"This story is told in a number of books but I've never told my side," he says.

"It was a wonderful feeling because we didn't think it would happen. People sometimes wrongly say that both the constitution and the transition [to democracy from apartheid] was a miracle.

It happened because people worked for it. There was sweat, blood and tears. The closest we came to a miracle was the sexual orientation clause in the constitution, because no other country had done it

"It happened because people worked for it. There was sweat, blood and tears. The closest we came to a miracle was the sexual orientation clause in the constitution, because no other country had done it."

Today, thousands of people join the parade but at the inaugural event fewer than 100 took part. Many participants were afraid of exposure to public scrutiny or that family members would see them.

"Furthermore, the event organisers only received permission from the chief magistrate of Johannesburg the day before.

"We feared that despite the months of planning, we would be turned down. I had an application ready to rush to the high court to overturn the magistrate's refusal on the grounds that it was irrational, unfair and partisan. But luckily we didn't have to bring the application," says Cameron.

"People wore paper bags in the first parade, I'll never forget. We wanted people to march, even if they didn't want to be identified. Of course, it was also a political symbol: I'm wearing this paper not because I'm ashamed but because other people are scared." 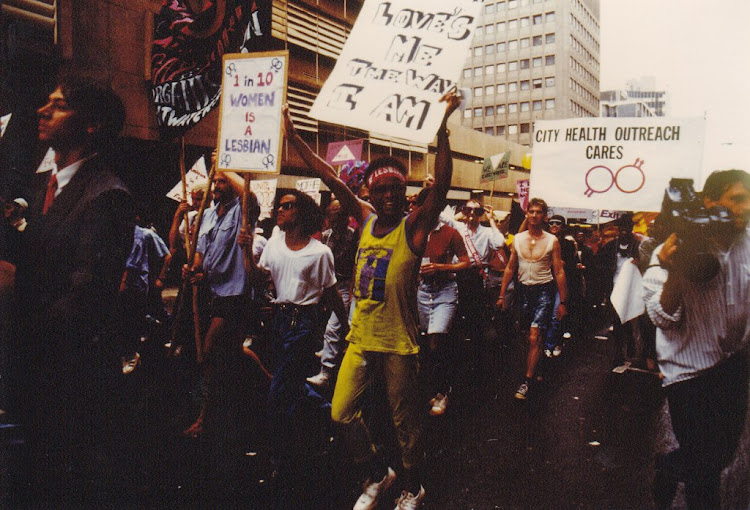 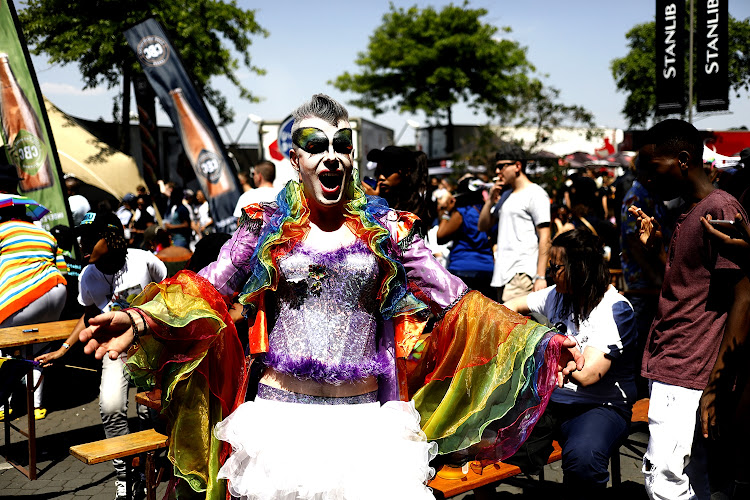 The intention behind Pride was to create visibility for queer people, but class and race played an important role too.

The working class was made up of mostly black people, and the representation of women was an issue of concern - something we're still dealing with today.

"Simon was an important figure to lead Pride because he came from Sebokeng and was a working-class black man.

"For the first few years, Pride was predominantly white. Then it started becoming more black because of changes in the class structures," says Cameron.

"Today, people are more comfortable about 'coming out'. Most youngsters have created a generational acceptance [of non-binary sexuality] that was lacking a few generations ago, an acceptance that's still lacking in the rest of Africa.

"Our new constitution held the promise of ending gender-based violence, violence against children and racism, but we still haven't managed to achieve these things." 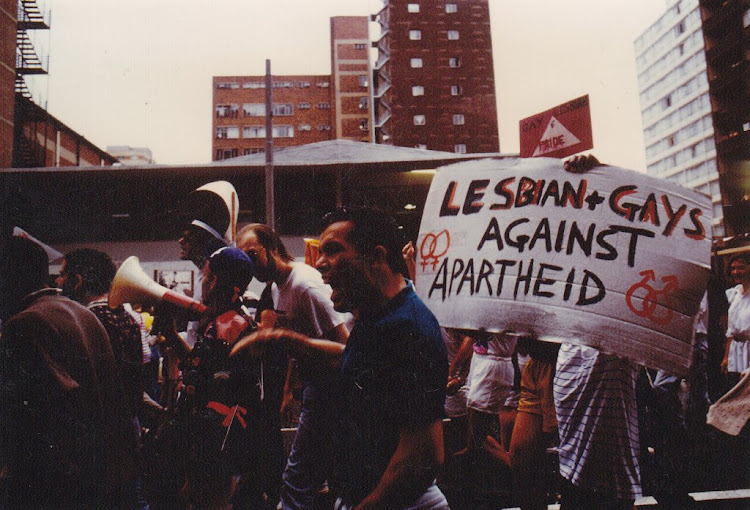 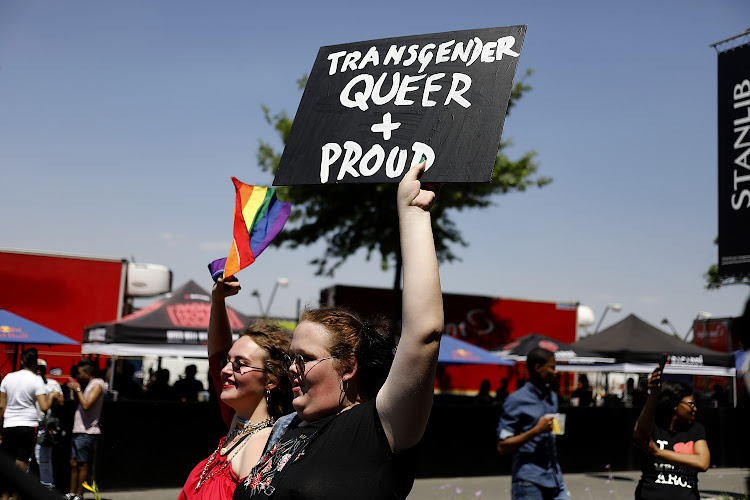 Cameron has been an HIV survivor for 22 years. He emphasises that although there have been steps taken to provide better health services for members of the LGBTQ+ community, like the Health4 Men clinic in Soweto that focuses on men who have sex with men, there's more to be done.

"Nkoli conceived Pride to be primarily about fun, but fun which makes a political statement," says Cameron, reminding us that love is the basis of the march and reflecting on his partner Nhlanhla Mnisi.

"He makes me laugh. I'm very fortunate," he says.

• The Johannesburg Pride Parade and Festival takes place on October 26. For information, go to prideofafrica.org

In a scene that could be straight out of Pose, contestants dance, vogue and strut to a loud, adoring audience at The Tennis Club's spectacular Le ...
Lifestyle
2 years ago

Cisgender to intersex: 14 terms you should learn this Pride Month

Language gives meaning and dignity; here we share a glossary of terms to honour the LGBTIQA+ community
Lifestyle
2 years ago

The new feature will roll out for iOS and Android users.
Lifestyle
2 years ago

This powerful statement sums up the inspiration behind acclaimed artist Zanele Muholi's legacy project 'Faces and Phases', which is now on in it's ...
Lifestyle
2 years ago