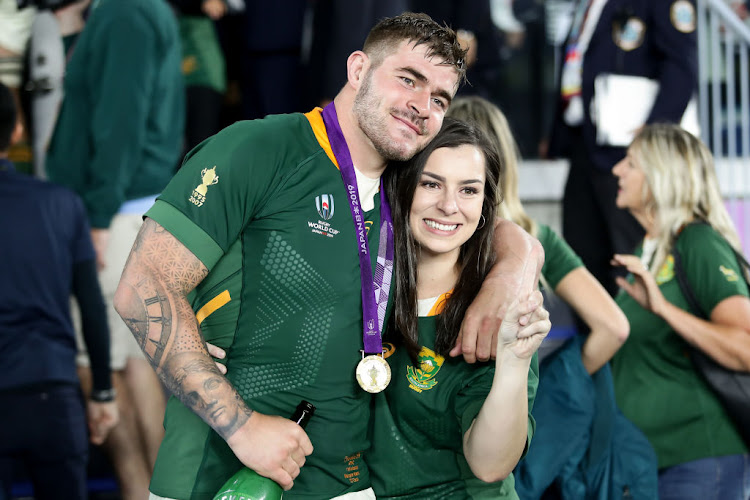 While their significant others were muddied and bloodied on the field, the wives and girlfriends of the Springbok rugby team were scoring points on social media. And captain Siya Kolisi’s wife Rachel — with her no-nonsense, tell-it-like-it-is attitude — was leading the pack.

Rachel let the world know her feelings when a Damian de Allende try was disallowed in the Boks’ World Cup match against Japan on October 20.

She posted a picture on Instagram of herself with son Nicholas Siyamthanda in one arm and a middle finger in the air.

She later wrote on Instagram: “But can we agree we all felt the same at halftime?”

But can we agree we all felt the same at half time? 🙈✌🏼

Following the Springboks' record-equalling third Rugby World Cup win on November 2 2019, the South African rugby heroes have been celebrated across the world. From a shoutout from tennis legend Roger Federer, to Faf de Klerk's unique encounter with Prince Harry - here are some of the standout moments from the aftermath of the Springbok victory.

When Kolisi ran onto the field in Saturday's final against England, he also had the support of his father Fezakele in the stands. Kolisi snr was on his first trip abroad.

Rachel made the announcement on Instagram. “My dads are on their way to Japan. uTata’s first overseas trip‚ what a time to be alive‚” she wrote with a picture of her father and her father-in-law.

The group were often photographed on outings together in Japan. Malcolm Marx’s girlfriend, Kirsten Grant, and Handre Pollard’s wife, Marise, posted photos and videos on Instagram of the “WAG-mobile”, the bus taking them on their various excursions.

They also posted photos of themselves wearing Mickey Mouse ears at the Tokyo Disney Resort.

Mouse-ing about for the day with bride to be @saskia_red 🐭

Frans Malherbe’s girlfriend, Ingrid van Huyssteen, and Pieter-Steph du Toit’s wife, Willemien, spent a lot of time together and they posted photos of themselves enjoying traditional Japanese meals with their partners.

De Allende and his girlfriend put on quite a show with several pics of them kissing.

Do you ever think “Wow, I’m going to miss this moment, even when you still living it?” You @damiandeallende make me so damn proud!! ❤️

When the women were not out enjoying the sights, they were in the stands for a Bok match, wearing their fitted Springbok jerseys.

Social media posts show that every game began with a WAG team talk and a group prayer.

But it wasn’t only the WAGS having fun.

Giant lock Eben Etzebeth was surprised when he was presented with a birthday cake for his 28th birthday on Tuesday.

A photo of him posing with a small cake — flanked by his much shorter teammates Cobus Reinach, Herschel Jantjies, Faf de Klerk and Cheslin Kolbe standing on chairs — was posted on the Springbok Supporters Club Facebook page.

And then there was the picture that many female fans had been waiting for — one of the team shirtless in the dressing room.

The Springbok scrumhalf had the world admiring his inner carefree party animal after SA's win against England in the 2019 Rugby World Cup on November 2 2019. The team defeated England 32-12 at Yokohama, Japan, to take their third Webb Ellis trophy. The champions quickly got into party mode, with Faf and the team drinking champagne from the cup and him greeting Prince Harry in colourful, patriotic undies, cheered on by his teammates.

Want a SA flag broek like Faf de Klerk? Well, sorry, they're all sold out ... for now

"FAF broke the internet and depleted our stock!"
Lifestyle
1 year ago

Royal protocol? Faf and his cozzie stole the show
Sport
1 year ago

The world has come together to celebrate the victorious Springboks. Siya Kolisi and his men defeated a heavily favoured England 32-12 on Saturday, ...
Sport
1 year ago
Next Article