Chanè Grobler in line for a social media prize having garnered 1.8-million fans 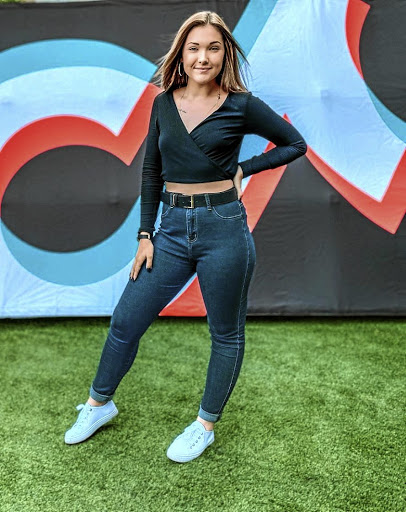 Her obsession with the social media platform TikTok has garnered Pretoria teenager Chanè Grobler 1.8-million followers and a nomination in the upcoming Nickelodeon Kids' Choice Awards, but it has also attracted cyberbullying and body shaming.

Grobler, 19, has been nominated in the Africa social media star category, alongside another South African, "Aunty Shamilla" - comedian Prev Reddy.

The ceremony will be hosted by Grammy Award-winning rapper Chance the Rapper at the Forum in Inglewood, California, on March 22.

Other nominees in the category are Anne Kansiime, from Uganda, and DJ Cuppy from Nigeria.

"I was going through my Instagram DMs and I got a message from Nickelodeon that I was nominated," Grobler told the Sunday Times this week. "I didn't believe it at first but when they sent me a letter - that's when I knew it was real."

She admitted she had been sceptical of the platform at first.

"Before TikTok, it was called Musical.ly which I downloaded in 2015 because I saw a lot of its videos on Instagram. But I only started posting videos on Musical.ly in December 2017. In August 2018, when the platform changed into TikTok, that's when I got an even larger following.

• There are 800 million active monthly users on TikTok.

• TikTok has been downloaded at least 1.6bn times.

"I didn't know what I was doing. I was just posting for the fun of it. After a while I thought to myself, 'Wow, people are actually following me,' and then I kept posting.

"When I had about 18,000 followers, one of my videos went viral, which pushed me to 100,000. That was in the beginning of January last year. I soon got verified [official recognition by TikTok] and I started taking it super seriously."

She started planning her videos, making sure she posted the best possible content. This included getting proper lighting, a tripod and redecorating her room for better backgrounds in her videos.

She said although she was often cyberbullied and body shamed, she had learnt to block out the hate and negativity.

"I used to get so much hate but I actually decided that I knew myself and what I was all about and wasn't going to be bothered by people's opinion of me, especially people I don't know.

"Why care about people who clearly have a problem with themselves?"

She also warned of the danger social media could pose to users' self-esteem and said young people should be mindful of the things they see on the platform.

"Keep it appropriate for your audience. If you're a 20-year-old with a 12-year-old follower and you post yourself in a bra and underwear you will most probably get banned or your video will get deleted. When you're yourself, you're able to grow a genuine following."

While TikTok is Grobler's obsession, she doesn't make much money from it

While TikTok is her obsession, she doesn't make much money from it.

"But I make some money through live streaming my videos. I don't ask for money online but some people do. When you're streaming some people will send you gifts online such as 1,000 coins which you can convert into a certain amount in dollars using PayPal, which you can send into your bank account."

The second-year education student at Aros College in Pretoria has made a concerted effort to create content that is safe for her young audience and hopes to work with children one day. "The reason I am studying to become a teacher is so that I have a degree to my name just in case social media blows up in my face or it stops being a thing. I still want something to fall back on."

Reddy said he was excited by the nomination and it was "surreal" to be recognised.

TikTok users are aged under 24, according to ABC News.
News
1 year ago