The golden age of film-making is lovingly re-imagined in this Netflix series — and this time there's no homophobia, sexism and racism 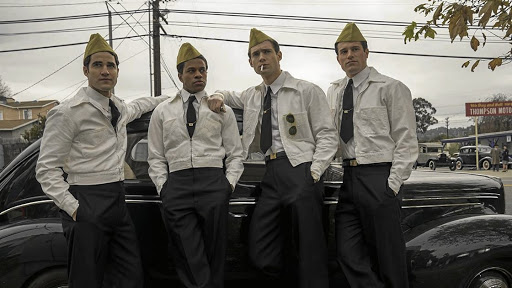 Nostalgia dictates that the golden age of Hollywood — that glorious, misty-eyed, dream-generating, glamorous, star-studded period that stretched for just over half a century from the late 1910s to the end of the 1960s. It's remembered as a perfect time, when the movies served to provide a hopeful, optimistic, magical escape from a world ravaged by wars, the spectre of communism and the ever-present threat of nuclear annihilation.

As anyone with a passing familiarity with the history of Hollywood knows, the truth is a lot darker, a lot nastier and a lot less glamourous. The movie business was run by ruthlessly misogynistic, homophobic and often racist men who were careful to ensure that whatever dreams they churned out didn't rock the broader social boat or include a place for the most feared and marginalised within US society.

Hollywood was a place where men loved women, women were dutiful and loyal to men and black Americans knew their place as the caricatured objects of racial prejudice and denigrating jokes.

No diversity? The Oscars have always been a ploy to keep the powerful in power

The denizens of Hollywood may have pursued their socially unacceptable vices and desires in the dark corners of mansions in the hills or in dodgy alleys in the underbelly of Los Angeles, but the studio system made sure that this never intruded on the kingdom of wondrous shadows that enthralled generations.

But what if Hollywood's golden age had been a place that used its fantastic powers of imagination to try to create a vision of a better world? A world in which Rock Hudson didn't have to skulk in the shadows as a gay man and refuse, to his dying breath, to reveal his sexuality and the Aids that killed him.

A place where Hattie McDaniel didn't have to receive special permission to attend the 1940 Academy Awards ceremony at a whites-only hotel and then sit at a segregated table before receiving her ground-breaking statuette for her performance in Gone with the Wind?

A town that stood up to the tyrannical bullying of senator Joseph McCarthy and the house un-American activities committee instead of hanging Dalton Trumbo and the Hollywood Ten out to dry.

A Hollywood where it wasn't accepted practice that female actresses looking to make it big would have to sell their bodies to drooling studio heads on casting couches?

Ryan Murphy's limited new Netflix series Hollywood neatly and optimistically does all that by re-imagining a golden-era Hollywood in which it is possible for Hudson to be openly gay and star in a film directed by a half-Asian American starring an African-American woman and produced by a female studio head, which is nominated for an Oscar.

It's a positive revisionist history told firmly from the political and social perspectives of Hollywood now that uses the nostalgic legend of Hollywood to deconstruct and criticise the long-projected false narrative of Hollywood's service to escapism and glamour.

It is loosely inspired by the 2017 documentary Scotty and the Secret History of Hollywood, which told the incredible and scandalous true story of Scotty Bowers, an unpaid pimp who worked out of a petrol station in LA, servicing the desires of four decades of Hollywood's A-listers.

Murphy's series follows a group of ambitious young Hollywood hopefuls thrown together in the postwar era by charmed circumstance and provided with a once-in-a-lifetime opportunity to not only achieve their dreams but to also change the system.

[Hollywood] manages to do what the best of the films of the golden era always did — sweep us away for a few hours to a world where the injustices, inequities and anxieties of the real world magically disappear

Their lives are only distantly connected until a heart attack knocks studio head Ace Amberg (Rob Reiner) out of action, leading to his long-suffering wife Avis (Patti LuPone) taking the reins and taking a chance on a production that will bring them all together — and change their lives forever.

Murphy has been given carte blanche by Netflix and so here, while not shying away from the sex and the sleaze, he makes the better choice of celebrating the humanity and romance of the variety of relationships at the heart of his multiverse.

This allows for a normalisation of these dreams that makes it easy to root for the different cast of characters joined together by a healthy (and hopefully idealistic) ambition that's easy to get behind.

It's a bittersweet but successfully executed exercise in wishful thinking that makes it seem as if it actually happened.

As we know, it would take the Hollywood of the '50s another 70 years to get to a vaguely similar place. Hollywood is, on one level, a sad indictment of the reality of its subject's history. On another, though, it's a lovingly realised piece of pure fantasy that manages to do what the best of the films of the golden era always did — sweep us away for a few hours to a world where the injustices, inequities and anxieties of the real world magically disappear.

• Hollywood is streaming on Netflix.

It’s Academy Awards season again and it comes with its usual issues of the lack of inclusivity and diversity.
Lifestyle
1 year ago

Harvey Weinstein found guilty: here's how we got there

Here's how the case unfolded over time.
Lifestyle
1 year ago