Whether you've got 90 minutes to spare or six hours, these are the shows and movies to spend it watching 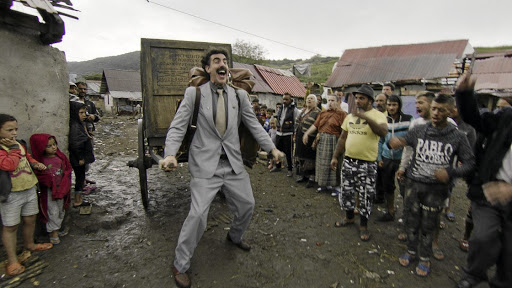 When a refugee couple fleeing war-torn South Sudan move into a new home in an English town they soon discover that their new environment has plenty of nasty and emotionally difficult surprises in store for them. It has lots of satisfyingly frightening elements but it's also a film that will leave you rethinking the stark psychological realities faced by refugees today.

Sacha Baron Cohen returns to his beloved Kazakhstan correspondent character for a predictably cringey journey through Trump's America in the lead-up to this year's election. Its main storyline is much more sentimental and awkwardly heartfelt than its predecessor and the much-talked-about creepy interaction with Trump ally, former New York mayor Rudy Giuliani, is definitely worth the experience.

There are also plenty of cringeworthy exposures of American prejudice and gullibility that will make you wring your hands, but it's still not quite as groundbreaking or controversial as it was when Borat first came to town in 2006. That's probably mostly because of how ridiculous the world and the US in particular have become since then - and even Borat can't do much about that.

Russell Crowe excels in his terrifying portrayal of hubris and power as Fox News founder Roger Ailes in this seven-part story of how Ailes used his political influence to build an empire of knee-jerk reactionary populism that achieved its ultimate success with the election of Donald Trump.

It's also of course the story of Ailes's despicable sexual exploitation of the many women who worked for him. And while the show sometimes steers a little too easily clear of an in-depth examination of the consequences of its nefarious protagonist's actions on those around him, it still offers some electrifying acting from its star and a good overall history of its subject that will leave you unsettled.

Mira Nair's much anticipated adaptation of Vikram Seth's epic novel offers many lushly observed period details in its examination of the search for love in post-independence India. What it lacks is much of the literary imagination and philosophical ruminations that made its source material so memorable. It's a solidly enough told and acted story but it doesn't always offer much beyond the façade of its decidedly attractive surface pleasures.

Whether you've got three hours to spare or eight, these are the best shows to spend it watching
Lifestyle
1 year ago

Whether you've got one hour to spare or four, these are the shows to spend it watching.
Lifestyle
1 year ago

'The Social Dilemma', 'On the Basis of Sex': Five things to stream now

Whether you've got one hour to spare or five, these are the movies and series to spend it watching
Lifestyle
1 year ago