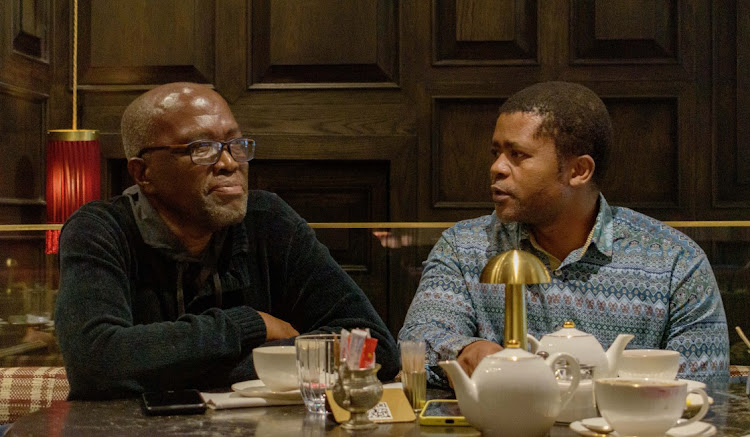 Their music slices across time with its sweet yet anthemic quality, bridging the gap between what you know and what you feel.

These are songs that defined our nation: nine voices singing a music that has deep, deep roots in our past.

Singing songs that have a  harmonic subtlety and aching melodic beauty, telling our stories in a haunting simplicity: singing of exclusion, poverty, pain, hope, defiance and  profound sadness.

But also singing of love and the sustaining of community, history and tradition. And doing it together.

It is this choral spirit that is the magical unifying quality that makes this music both viscerally human and  profoundly transcendent. Harmony as healing.

'Baba Joseph Shabalala we stand on your shoulders and your music will live forever,' says the Ndlovu Youth Choir
TshisaLIVE
2 years ago

No wonder these songs sustained Madiba in his darkest times. And it makes perfect sense that they would cut through the noise and became the ear worm in the global consciousness and so a powerful spur for change.

I won't lie, I feel a little giddy meeting the oldest living member of Ladysmith Black Mambazo, Albert Mazibuko, who joined the five Grammy award-winning isicathamiya group shortly after it was founded in 1964, and Sibongesi Shabalala, one of founder Joseph Tshabala’s four sons. They continue the tradition their band leader put in place since his death in 2020.

Given my own delight in the moment I wonder if they have groupies? After all they spend a good part of every year on tour. And they tell me that they can count the countries they haven’t performed in more easily that the ones they have.

They laugh bashfully and demonstrate the humble charm that seems to be the heritage of Joseph Shabalala's philosophy. There are no stars with entourages here, there is instead a deep culture of respect for the music and the traditions they are the caretakers and crafters of.  It's about a bigger picture.

The nine members of the group are all related, sons and cousins of Joseph Shabalala. “When people ask us how to join the group, we say come to practice,” says Sibongesi. They practise at the Durban home of Joseph Shabalala, which they hope to turn into a museum. “It's not about having a pretty voice, it's about the values that we stand by.”

We are meeting at Zioux. The wood-panelled, art deco with a nouveau twist explodes in  Africa theme; the restaurant feels like a glorious speakeasy that could be straight from Harlem in the '20s.

It felt like a harmonious venue for lunch a week before the band host their first Celebrate Nelson Mandela concert.

“It’s a celebration of what Mandela stood for, we want to spread the message of love and peace throughout the world to encourage people not to resort to violence but use peaceful amicable means,” says Mazibuko.

He tells me he grew up and was working on the farm outside Ladysmith as a young man when his cousin Joseph inducted him into the band.

Sibongesi, on the other hand, basically grew up in the band. “My father would wake us up in the middle of the night and teach us a new song which might have come to him in his dreams. We would learn it before the rest of the members would come in and rehearse during the day.”

The stories could keep us here all afternoon. So could David Higg's food, which is insanely delicious —  cafe food on steroids.  My chicken soup is addictive. And is that gold leaf on Sibongesi's burger?

We talk about how you could hear a pin drop when they sang in community halls across the country before the introduction of sound systems in the '70s.

Apparently Joseph said the mikes and amps suddenly gave people licence to talk. We discuss how singing traditional music kept them under the apartheid regime's radar, in spite of the huge quantity of music that they were selling and the near-constant sell-out concerts across the country.

They had no trouble getting permission to leave SA and record with Paul Simon in London and then in the US, and did not know about the cultural boycott because they were in the realm of traditional music.

We talk about how they practised Homeless all night until they got the perfect version after a day of struggling in the Abbey Road studio to find the right inflections. And working on the Long Road to Freedom song to sing in Oslo for Nelson Mandela's Nobel prize ceremony.

Part of their legacy is to nurture new choirs through their Ladysmith Black Mambazo Mobile Academy programme, to discover and develop the talent of artists doing acappela and indigenous music — they will be taking two of these groups, Gods Fellas from Rustenburg and Medudwetsane from Kimberley, on tour with them in the EU and US later in the year, and they will be performing at the Joburg Theatre with them next week

“This concert will be an annual event. Mandela's message is more important now than ever,” says Albert.

Halle Robinson: Savouring the fruits of a TikTok coup

There is nothing like a newish social media platform to make you feel like a died-in-the- wool Luddite.
Lifestyle
1 month ago

Naughty Nick Kyrgios is bringing the bad temper back to tennis

Brian Mitchell is still in excellent shape, hitting holes-in-one rather than other men's faces
Lifestyle
1 month ago