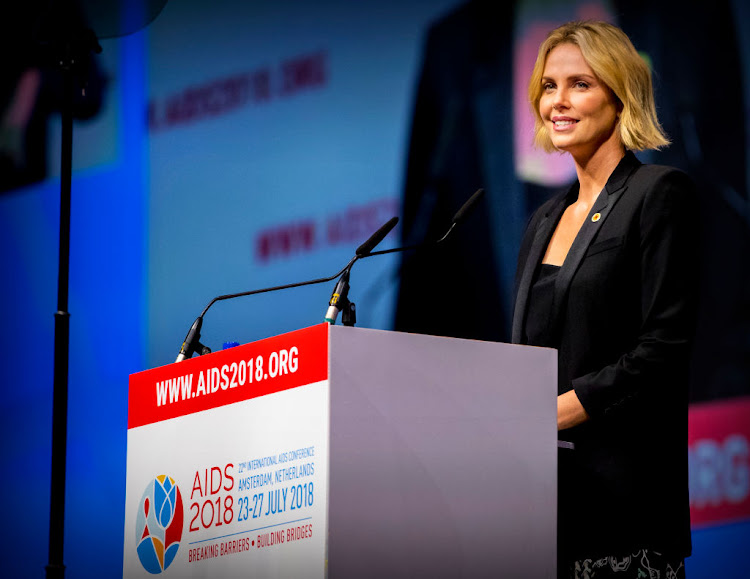 Movie star Charlize Theron kicked off the opening of the International Aids Society conference in Amsterdam on Tuesday‚ speaking out against the stigmatisation of sex workers and drug users‚ who have much higher rates of HIV than other people.

Sir Elton John also spoke about the work his $10-million fund does to help gay men‚ lesbians and bisexual people with HIV prevention and treatment. He funds programmes for gay men in SA‚ too.

Prince Harry joined him on stage – and after the celebs had done their bit‚ the world’s leading HIV scientists got down to releasing the latest research results.

South African scientist Prof Linda Gail Bekker of the University of Cape Town is the head of the conference‚ being attended by 15‚000 people.

Here is a summary from Day 1:

1. Have sex without a condom and stay safe

Scientists measured 75‚000 condomless sex acts between 972 gay couples where one man was HIV positive and the other negative. Not a single person contracted HIV from their partners. This is because the HIV-positive men had undetectable viral loads‚ meaning they took their ARV treatment so well that the virus was not replicating in them.

This study is further evidence that an undetectable viral load – which can be easily measured – means a person cannot pass on HIV and thus can avoid using condoms. This result has been found many times‚ but only among large trials of straight couples.

Gay sex is biologically more risky‚ so this study confirms that people with an undetectable viral load won’t pass on the virus‚ no matter the type of sex they have.

This scientific fact is advertised with the slogan U=U: "Undetectable means untransmittable".

2. Two drugs keep HIV under control as well as three

It is the norm that all antiretroviral treatment requires three drugs to prevent the body becoming resistant to the drugs. Even the South African government-provided single pill a day consists of three different ARV medicines.

But a trial in Argentina and parts of Africa‚ Europe and Asia Pacific show a new medicine of two drugs‚ called Dolutegravir and Lamivudine‚ worked as well as a common ARV drug with three medicines.

In the study‚ 1‚400 HIV-positive adults were put on treatment for first time and half got the new treatment and the other half the three drugs. Their health was later compared.

Researchers said the two-in-one treatment could "be an opportunity to reduce treatment costs and reduce side effects".

Dolutegravir is a newish HIV drug expected to be used in South Africa next year‚ instead of a drug currently used now called Efavirenz. It has almost no side effects and people do not become resistant to it.

There is one recorded case of resistance of the 600‚000 people using it abroad in America and Europe‚ Wits Reproductive Health and HIV Institute Professor Francois Venter has previously told TimesLIVE.

The fact you can’t become resistant to Dolutegravir means the medicine won’t stop working and leave users to die from Aids.

HIV infections down in SA - but so is condom use

The number of new HIV infections in South Africa is dropping‚ but there were still 231‚000 people who contracted HIV in 2017.
News
3 years ago

But now Dolutegravir has been linked to birth defects of babies born to four women in Botswana using the drug. This is an initial finding and may not be confirmed in a bigger trial‚ researchers have cautioned.

However‚ protesters‚ including South African women at the conference‚ demanded to be offered the new drug as it had so few side effects and said not “every woman is a birth machine”.

In other words‚ they asked that it should be offered to women who are not planning to fall pregnant or are past child-bearing age.

4. Another trial for a cure fails

A new cure study titled RIVER – conducted by researchers from Imperial College London – showed strategies to kick out HIV hiding in cells called “reservoirs” and then kill the virus failed.

After using ARVs to stop the virus replicating‚ scientists have long struggled to track down the leftover HIV‚ which hides in the body and is invisible to the immune system.

10 things you need to know about HIV self-testing

BioSURE HIV self-test is now available in South Africa at some Dischem branches‚ Spar stores and at some Pick n Pay supermarkets for people to test ...
Lifestyle
3 years ago

The trials are called “kill and kick” trials. This particular trial done on 60 people failed. Only the “kick” part worked.

Scientists‚ led by Sarah Fidler of Imperial College‚ said they were now analysing results to try to understand why they could not kill the virus.

If you are a transgender woman‚ you may want to know that studies found when Thai transgender women took hormonal treatment to transition from being born male to female‚ the hormone interfered with ARV prevention drug tenofovir.

A press release explained that the “feminising hormone” can affect the prevention of HIV as it interferes with the action of the prevention drug taken daily.

But study researcher Akarin Hiransuthikul of the Thai Red Cross Aids Research Centre said the preliminary study did not prove this effect and called for more studies to see if this was true.