For its centenary this year, the Winchester Hotel in Sea Point, Cape Town, has had a major facelift, but the bougainvillea is going nowhere 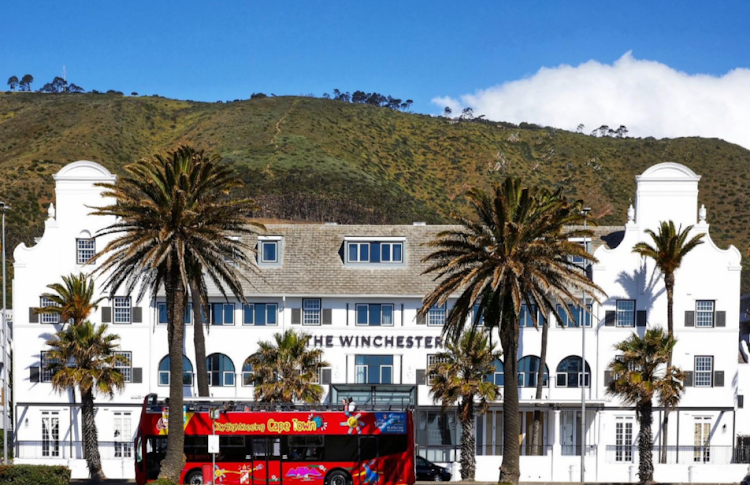 The facade of the newly renovated Winchester Hotel in the shadow of Signal Hill.
Image: Supplied

One of my favourite things to do in Cape Town is to run along Sea Point’s famous promenade, where the wild Atlantic waves crash over the seawall, spraying their salty mist into the sky and over unsuspecting skaters, scooterers, amblers and paragliders descending from Lion’s Head.

Look up and the scene is framed by one of the world’s most iconic landmarks, Table Mountain, flanked by Lion’s Head and Signal Hill. I always notice the beautiful Cape Dutch revivalist building that stands out among the blocks of flats about half way down Beach Road, the Winchester Hotel, where restaurant patrons enjoy morning cappuccinos or sundowners overlooking the street. 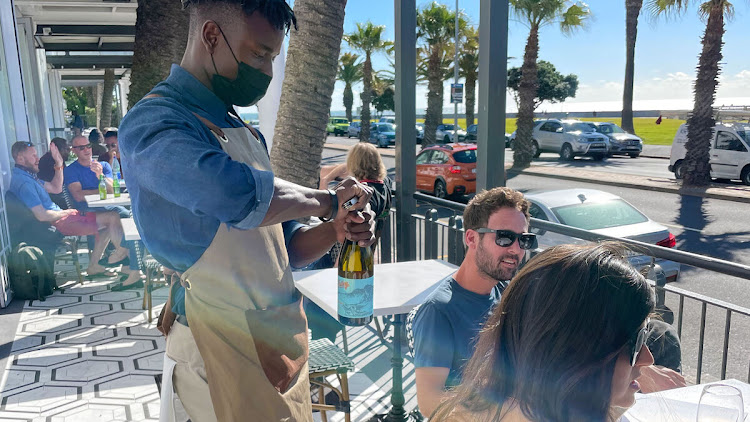 The veranda at the Winchester is a relaxing place for a sundowner.
Image: Supplied

For most of last year, the hotel was boarded up, huge renovations taking place behind scaffolding and chipboard that would give the “grand old dame” the facelift she needed to update her best features, while retaining her unique character and style. The newly restored historic property now has a high-end, yet comfortably lived-in feel that's attracting rave reviews from locals and tourists.

Situated on one of Cape Town’s most picturesque streets, the Winchester was originally built as residential flats in 1922. In those days the building stood on the edge of the beach and not across the road from the grassy promenade, as it does now.

When Mr and Mrs Harvey bought the building in 1958 (rumour has it, for a suitcase full of money they’d travelled with from England), they turned the flats into a hotel, which still belongs to their daughter, Frances Wainford.

In fact, Wainford, now an octogenarian, was the one who decided the hotel needed a spruce-up for its centenary year — to prepare it for its next hundred. She’s as much a part of the hotel as its famous black and white-tiled courtyard, with central fountain and three storeys of eye-poppingly purple bougainvillea that decorate the ornate arches of the courtyard’s open-air passages. 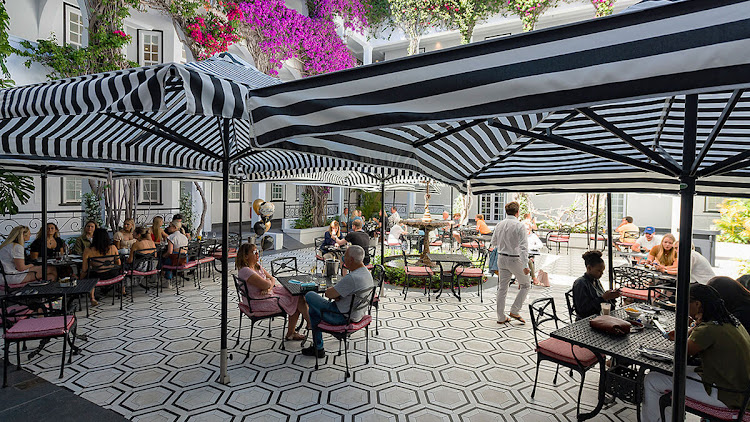 Apparently, since its conversion from a parking lot, the courtyard has become one of the most Instagrammable sites in the city and a place where Mrs Wainford loves to lounge. “My mother asked me before she passed away not to put flowers on her grave, but to rather honour her memory by looking after the bougainvillea,” she says.

Mardré Meyer and his team at Source Interior Brand Architects, and Andrew Flint, director of Cape Town architectural firm GAPP, worked on the project. Meyer says they tackled “major practical problems with the ageing building”,  such as plumbing, as well as giving the hotel an "aesthetic upgrade".

"We wanted to respect the narrative of the hotel because it certainly has one," he says. "It’s reflective of the Harvey family’s great character. We didn’t want to lose what I call ‘The Mrs Wainford’ layer when we upgraded the building. She is also an antiques dealer who furnished the rooms herself.” 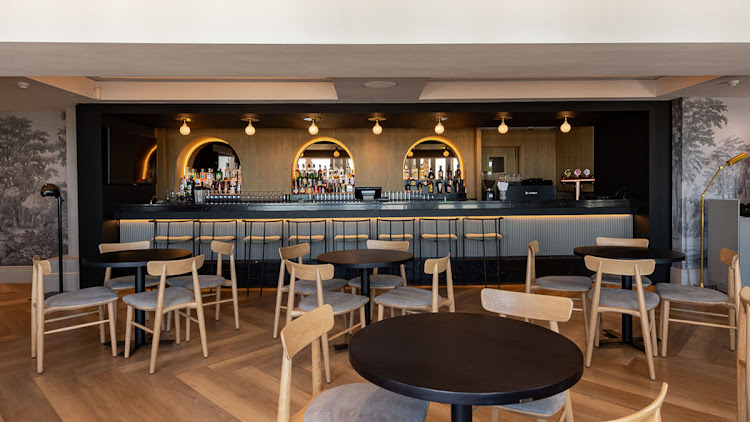 A mixture of simplicity and ornateness in the new Winchester.
Image: Supplied

The building reopened in November last year. “We worked on four principles,” says Meyer. “The first was to deliver on the expectation of the architecture so people who walk the promenade notice the welcoming aura of the building. Secondly, we wanted to standardise the rooms and the front façade by emphasising the three arches you see on either side of the building. Thirdly, we wanted to design for a diverse clientele. And lastly, while we respect the Winchester is a vintage building, it’s not a stage set or a museum, so we focused on contemporary comfort.”

ON TO THE IMPORTANT STUFF: HOW ARE THE ROOMS?

The property’s 76 guest rooms and suites are each distinctive, with views of the mountain or the Atlantic. They’re impressively spacious and not at all corporate or cookie cutter. The room I stayed in was decorated in golden green tones, with lush carpeting, rich curtains and a view of the ocean. There were also personal touches such as antique bedside tables and patterned cushions. The bathroom had a shower and bath for extra relaxation. 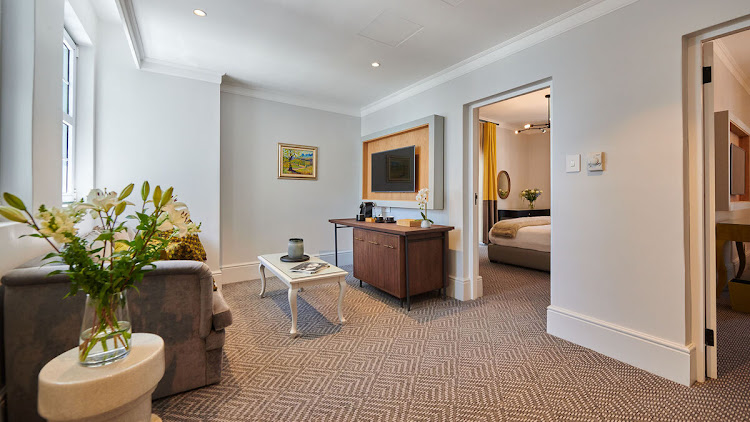 There are two beautiful spaces in the restaurant and separate bar that serves really good cocktails and anything else you might need to spice up your stay. The restaurant, Shoreditch, and the bar, Harvey’s, continue the monochrome design theme of the black and white tiles in the courtyard, enlivened by chandeliers. Shoreditch is run by Rory Jossel, who owns YU and MRKT on the Foreshore. The restaurant serves everything from Italian to Asian and Mexican food, all seared, caramelised, roasted or braaied over hot coals. The food was delicious, accompanied by a Wainford cocktail — Belvedere lemon vodka, pineapple, cucumber and elderflower, and a Royal Margarita — tequila, triple sec, raspberry, lime and bubbly. It was a balmy early December evening, so we asked to be seated outside, next to the fountain and curtain of purple flowers in the courtyard, under the stars. We ate oysters with watermelon ponzu, crispy onion and Mexican salsa, tapioca calamari with sweet plum, line fish chargrilled in fennel butter and slowly braised beef short rib in chipotle oil. 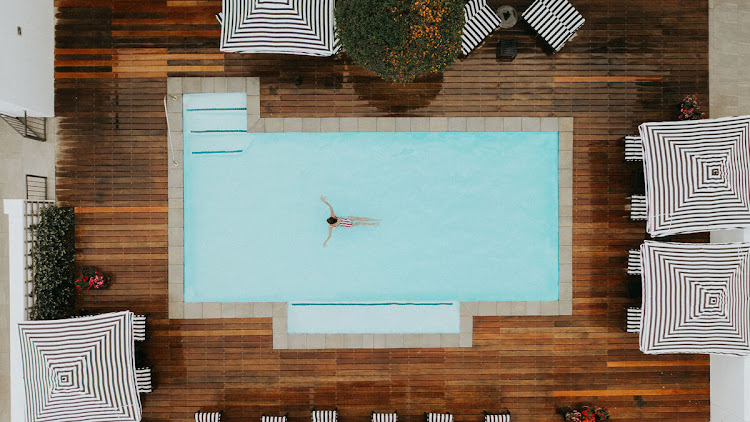 The new pool area at the Winchester Hotel in Sea Point.
Image: Supplied

The rooms are more than comfortable and chic, and in the morning, when you open the luxurious curtains, that delicious Cape-specific whiff of the ocean greets you before you’ve taken in views of the Atlantic from your window.

The best moments, though, were sitting on the veranda of the restaurant downstairs, slowly drinking coffee and watching all the action on the promenade. Oh, and seeing Mrs Wainford in all her splendour at her favourite table beneath her mother’s bougainvillea.

ANYTHING LEFT TO MENTION?

Because I really love the Atlantic seaboard beaches, I didn’t get a chance to enjoy the beautifully renovated pool area, but I could see how much my fellow guests loved relaxing on deckchairs as I passed on my way to surf and sand.

Rates staring from R2,455 per room per night, B&B. Find more information or book on the hotel's website.

• Nagel was a guest of the Winchester Hotel.

Fancy bud and breakfast? What about ganja yoga? Then join this blazing trail

The 12 Apostles Hotel & Spa, Cape Town, is a destination in its own right

This isolated, five-star kingdom capitalises on the Cape’s most spectacular natural attractions with enough in-house allure to be a a holiday in its ...
Lifestyle
1 month ago