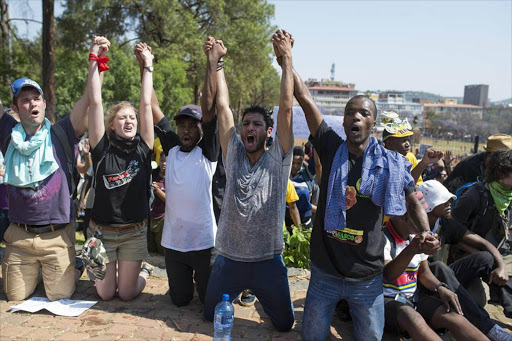 Protesting students on Friday at the Union Buildings in Pretoria, where some of those among the marchers turned violent and took their battle into the streets of the capital
Image: IHSAAN HAFFEJEE

Embattled Higher Education Minister Blade Nzimande admitted yesterday he had no idea how the government would fund a projected R3-billion shortfall in university fees after it announced a 0% increase for next year.

In a week in which student protests rocked the ANC government, Nzimande insisted that he had given his job "his best shot" and notched up "some notable achievements".

Yet Nzimande has been heavily criticised for what many perceived to be his high-handed behaviour - first meeting with vice-chancellors on Monday without student representatives from striking universities present to announce a 6% hike cap in student fees and then, on Wednesday, taking an extraordinarily long time to leave the National Assembly to address students outside.

Yesterday, Nzimande said finding sufficient funding from the Treasury would be "a tough one".

"We have to find the money somewhere. At the moment, we are asking our directors-general of Treasury and higher education to put their heads together to say where can we try to find money because we can't leave our universities in the lurch.

"There is no tangible money now except the possibility of using surpluses from Setas [the sector education and training authorities] but I don't think it will be able to cover the [total] shortfall."

The uncertainty about fulfilling President Jacob Zuma's 0% promise was underlined by a frank admission yesterday from Nzimande's director-general, Gwebinkundla Qonde: "We don't know where we will get the money. That's a fact."

Nzimande conceded that he had not consulted with Finance Minister Nhlanhla Nene before the 0% announcement on Friday.

"No, I haven't discussed the 0% with him. There's no new money for our department. I am not immune to criticism, but it's unfair on us to land this problem on our department."

Nene yesterday said it was too early for him to say how the government would fund Friday's deal.

He referred questions to the Presidency . " It is the P residency that is dealing with that one. There are processes now that are going to unfold. It will be premature of me to answer questions when the president on behalf of government made a statement after discussing with all the stakeholders."

The funding crisis is likely to be exacerbated by Nzimande's admission that at least eight of South Africa's 26 universities will have to be completely bailed out by the government. These are all historically black institutions.

Yesterday, vice-chancellors from several universities agreed that, as per Friday's announcement, they would fund a part of the shortfall.

Max Price, vice-chancellor of the University of Cape Town, said: "We said we will reprioritise; we will make some cuts, but the bulk of it will come from the state."

Adam Habib, vice-chancellor of the University of the Witwatersrand, said he thought the total shortfall would be closer to R4.2-billion nationally.

He said the contribution towards the shortfall from the different universities would have to be negotiated with the department.

"I think it [the 0% increase] is the best deal. Hopefully now we can focus on the academic programme."

Professor Ihron Rensburg, vice-chancellor of the University of Johannesburg, said the big challenge facing the state was making sure "that the resource is released at the right time".

He said the first step was making sure that the rural and urban poor were fully funded: "My estimate is that about 30% of students in the university system are from poor urban and rural communities."

Meanwhile, one of the issues that has not received much scrutiny is Zuma's announcement that the autonomy of universities would be investigated. According to the Higher Education Act, tertiary institutions receive government funding but no interference.

Nzimande, who has been a fierce critic of universities' independence, yesterday said amendments to the legislation would seek to clarify when the government would be allowed to step in.

Citing the case of North West University, where a former vice-chancellor threatened court action against him, Nzimande said Theuns Eloff had sought to "keep the Potchefstroom campus an apartheid enclave".

Sizwe Mabizela, vice-chancellor of Rhodes University, warned against tampering with the independence of institutions.

"We are accountable. The scale should not tilt in one direction or another and there are also legal instruments the government has to deal with some of the issues.

"But the danger of completely removing institutional autonomy and giving all the powers to government is that you will not know in years down the line that you might end up with some minister or government that would want to use that power to the detriment of higher education," he said.

A number of sources who attended the meeting said Mabizela and Habib were most vocal on the issue of autonomy.

"They were pushing for a distinction between operational and academic autonomy," said an insider.

It was student leaders at the meeting who sided with Nzimande and pushed for the government's intervention.

The students were represented by organisations such as the South African Student Congress, the EFF's student wing, the DA Student Organisation and the ANC Youth League.

It has now emerged that a day before the students scored their 0% increase victory, the ANC had held a series of meetings where pressure was put on the government to relent.

It has also become apparent that Nzimande's cabinet position is under attack.

At a party caucus meeting on Thursday - after a day of drama in which UCT students invaded the parliamentary precinct - ANC MPs instructed Nzimande to argue for a moratorium on increases at his next meeting with universities.

"The caucus said moratorium or nothing. We said that is the best option to get us out of this situation. We had to find an immediate solution," said an MP who asked not to be named as he was not authorised to speak to the press.

A similar sentiment was expressed at an ANC-led alliance crisis meeting at Luthuli House later that day.

"Blade came armed with decisions from the caucus. He said: 'I am not the chair of the caucus. I briefed them and this is what they said.' He said this is the conclusion. We must place a moratorium while the task team we set up looks deep into these issues to define what happens," said one of the leaders.

Although the ANC Youth League did not attack Nzimande at the Luthuli House meeting, league secretary-general Njabulo Nzuza said members expressed their unhappiness with Nzimande's leadership.

"There should have been thorough consultation and we as the ANC Youth League should have been consulted, with student formations. However, we were able to go and lobby government, which has resulted in the positive results."

Students have decided to continue their protest.

Students have suspended their protest and classes should resume tomorrow.

"We just don't know if the university will open (on Monday)," said a UCT official.

A spokesperson says the university will open tomorrow.

The SRC secretary-general says in all likelihood classes will not resume tomorrow, but there will be more clarity later today.

The SRC president said last night that the shutdown was over.

The communications and media liaison manager for University of Western Cape said: "All academic and support staff will be at work as normal tomorrow. The students will be off for studying."