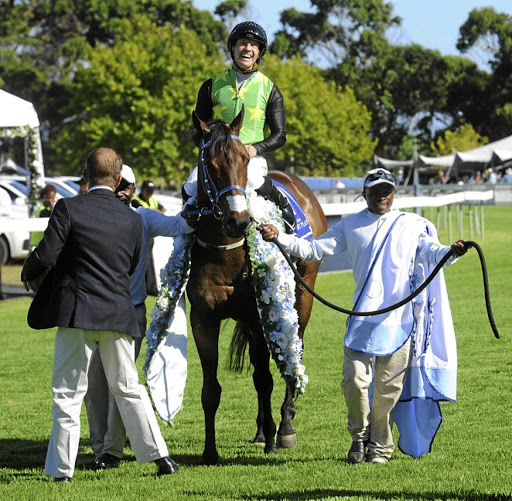 The country's top racehorse is embroiled in a financial dispute prompted by the implosion of Steinhoff, the retail giant which owes hundreds of millions of rands to South African banks.

Horse of the year Legal Eagle was one of many thoroughbreds co-owned by former Steinhoff CEO Markus Jooste via a company called Mayfair Speculators.

The horse was sold earlier this month to another retail tycoon and racehorse enthusiast, Braam van Huyssteen.

Steinhoff is teetering on the brink of collapse, as the share price moves ever closer to its 1998 listing price
Business Times
4 years ago

The sale was concluded just days before Absa applied to the High Court in Cape Town to liquidate Mayfair Speculators and its holding company, which own about 350 horses, according to court documents.

Legal Eagle was voted horse of the year for the second year running at the Equus Awards in August and won the L'Ormarins Queen's Plate in January.

The six-year-old bay gelding is gearing up to defend the Queen's Plate title at Kenilworth in Cape Town next month. It is in the stable of Sean Tarry, one of the country's leading racehorse trainers.

The horse and others still owned by Jooste are under the spotlight in the high-profile liquidation proceedings lodged last week and due to resume on February 8.

In an affidavit submitted to court on Friday, Absa's manager of business support, Hester van Niekerk, confirmed that the bank would investigate all assets disposed of by Mayfair Speculators in the wake of Steinhoff's crash.

The sale of Legal Eagle will form part of this investigation, according to a legal source involved in the litigation.

In her affidavit, Van Niekerk said it appeared that Jooste was party to a "fraudulent scheme" aimed at scattering assets "in order to put them beyond the reach of the applicant [Absa], Sanlam and Investec [other creditors linked to Mayfair Speculators]".

She said: "It seems probable that [Mayfair Speculators] through Jooste has disposed of other assets, which requires immediate investigation and resolution."

Van Huyssteen could not be reached for comment, but in an interview with Sporting Post this month he described Legal Eagle as "the best horse in the country".

Jooste's property assets are also in the spotlight after Steinhoff's crash, including his R15-million property at Val de Vie Estate between Paarl and Franschhoek.

Ryk Neethling, an Olympic swimming gold medallist and now Val de Vie director, this week confirmed that Jooste's property was on the market.

He said the property of about 3ha was "likely to sell very fast".

Construction work on Jooste's holiday home in Hermanus has stopped.

Spokesman for SA Rugby Andy Colquhoun said a formal announcement on the future of the sponsorship was expected next month.

Steinhoff's share price this week hit a 17-year low of R4.50 - down from R51.40 at the beginning of the month. The collapse came after news that the company had accumulated total debt of R161-billion.

The company's accounting practices and disclosures are to be scrutinised in several investigations amid claims that investors had been hoodwinked. Jooste faces a criminal charge following a complaint laid by a Johannesburg fund manager.

SA’s tax revenue will be negatively affected if Steinhoff does not survive the corruption scandal in which it has been implicated‚ says Deputy ...
Business Times
4 years ago