WATCH | No water for two years in North West municipality

Residents make their own plan to get water from single borehole 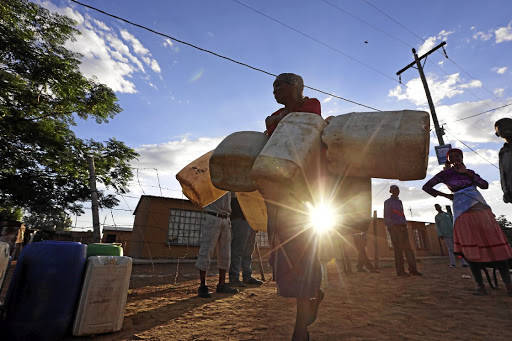 Mmaania Kolobe has her hands full with the containers she brings to a local borehole in Tswaing. But carrying them home, once filled, she will need more than two hands.
Image: Thapelo Morebudi

About 2am every day in Phelindaba township at Sannieshof in North West, six men begin pumping water from a borehole into a tank from which residents will fill their containers. It's about a 2km walk to the tank.

The men were assigned by the community to ensure the pumps were up and running. The men pump the water from a borehole on an old golf course.

The area has not had municipal water supply for at least two years because of failing infrastructure.

The Tswaing municipality is responsible for an area that includes Sannieshof, Delareyville and Ottosdal. It has struggled to provide water and other essential services.

In Delareyville the stench of raw sewage and uncollected rubbish is pervasive. The neglect is the same in the other two towns.

In Sannieshof, the municipality has provided water tanks, but not pumps and electricity for the borehole.

Stapa Mmutlwane, a resident, said she had contributed to the cost of the pump and electricity.

"Each household contributes R10 monthly towards purchasing electricity, and the total collected money is between R800 and R1,000, which is sometimes not enough," said Mmutlwane.

Sometimes those who can afford contribute a bit more.

Communities rallying together is becoming routine in the municipality.

In Delareyville, about 50km from Sannieshof, local doctor Morne Beer shares water from a borehole with the clinic opposite his practice.

"I really wonder how the clinic is coping with the little water they get from me because in the medical fraternity we use a lot of water. We have to wash our hands very frequently," he said.

Beer said he also had to buy about 300l of water weekly as an emergency ration.

In the past few months, he has seen many more patients with dehydration and sometimes diarrhoea, which he believes is related to the water problems.

"The problem with water is that the infrastructure is not maintained. I can't rule out the possibility of putting the municipality under administration," he said.

Local government & human settlements MEC Motlalepula Rosho said in a statement: "As we can see, its annual reports were never tabled in the past nine years. How do we approve budget as government, but there is no accountability from the same municipality for many years?

"There is no relationship between management and employees and it will be difficult for them to account for monies appropriated. Councillors also fail to [do] oversight on the municipal officials."

Residents of the Tswaing municipality, in North West, have lost all hope in their municipality as it is not providing water to the thirst-ridden region.

Tebogo Lekgethwane, spokesperson for the provincial health department, said boreholes had been sunk at its facilities around the Tswaing municipality except for Ottosdal.

Marna Mulder of Delareyville decided in November to move to a nearby farm because she was fed up with the water outages.

"I now have my own borehole water and get my electricity directly from Eskom."

Moepeng Modise, 36, of Atamelang township outside Delareyville, said her daughter's school had asked pupils to bring their own drinking water.

"She tells me that she can't use the toilet at school as they cannot flush," she said.

Modise spends about R800 a month on bottled water.

"I'm only paying half on my municipal account now so they won't cut my electricity. With the other money I buy bottled water."

A neighbour shares borehole water that she uses for bathing and laundry.

Johannesburg Water says the water issues in at least 10 suburbs is caused by infrastructure issues.
News
2 years ago

Employees at the education department's district office said they had to take water to work so that they could flush the toilets. Municipal workers said they used toilets at a petrol station across the road.

Municipal manager Isaac Moruti admitted to the committee last year that the municipality was struggling to honour deductions for employees such as unemployment insurance, medical aid and pension funds because it lacked revenue.

"The current electricity bill with Eskom is at R59m and we agreed to pay R2.9m per month when there are funds available," he said.

Fana Moraka of the North West Business Forum said the water shortage was negatively affecting local businesses. "Businesses are losing money because sometimes they have to close due to not having water."

He said the forum was planning to meet Mokgoro to resolve the crisis.