Beneficiary of fraud payout tried to spend it on new tombstones 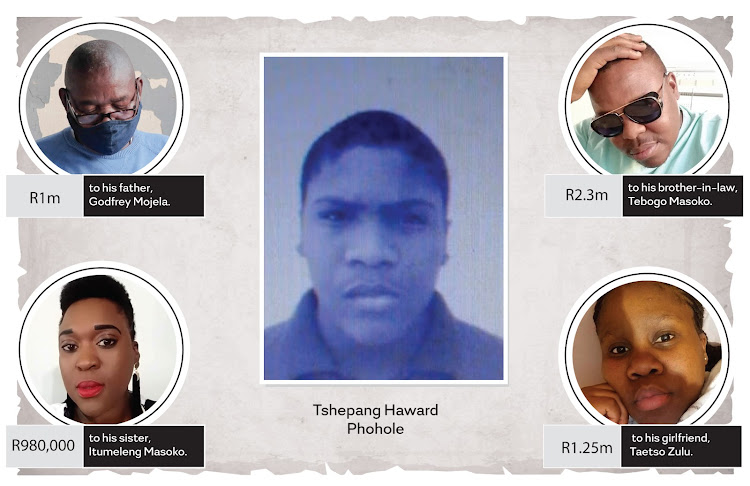 A look at how Tshepang Phohole distributed the UIF cash.
Image: Nolo Moima

New tombstones and cafe renovations: this is how the family of a 25-year-old Pretoria warehouse worker blew through some of the R5.7m in Covid-19 relief funds irregularly paid into his personal bank account by the Unemployment Insurance Fund (UIF).

Tshepang Phohole also gave millions of rands to his father, sister, brother-in-law and girlfriend in what the Asset Forfeiture Unit (AFU) claims was a bid to launder the cash.

The instant multimillionaire - who works as a packer at a paint company's warehouse in Silverton - was this week described by his mother, Meisie Mojela, as a "good boy" who was caring and compassionate - and who had never before found himself on the wrong side of the law.

From his unremarkable home in Mamelodi West, where he lives with his elderly parents, Phohole is alleged to have distributed the money in what AFU investigators called a graft and money-laundering scheme.

Nearly R6m in Covid-19 relief funds - intended for 200 workers at risk of starvation - were diverted to one man in what Asset Forfeiture Unit (AFU) ...
News
1 year ago

Labour department director-general Thobile Lamati told parliament's standing committee on public accounts on Friday that Phohole created a profile as an employer, using CSG's UIF number. He then filled in his own banking details.

"When the company tried to access the system, they were blocked. They then requested a new password and were given access. They uploaded their employees, but overlooked [the changed banking details]," he said.

"In the process of resetting the password, there could be collusion between some of our officials who are responsible for this, or the employee accessed the company profile with the express intent to defraud the fund," he said.

Hawks spokesperson Col Katlego Mogale said their probe was incomplete, and as such, no arrests had been made.

When the Sunday Times visited Phohole's house this week, Mojela said her son was out and would be back soon. He did not return.

Mojela said he had kept her in the dark about his windfall.

"I had no idea that my boy had this money. He has not been working so he was here looking after me because I am sick," she said.

"I don't know how he got this money maybe it was just a mistake, but he needs to tell me what is going on."

I had no idea that my boy had this money. He has not been working so he was here looking after me because I am sick

When she learnt that R4.2m of his windfall was allegedly funnelled to her husband, daughter and son-in-law - and that her family was the focal point of a criminal investigation - she became physically ill.

The botched payment to Phohole, and a R4.7m payment to a retired bus driver, have put the focus on UIF systems.

UIF spokesperson Makhosonke Buthelezi said forensic auditors flagged 75 claims that were possibly fraudulent, 57 of which are still under investigation. There were three, worth a total of R11m, where fraud was only picked up after the fact. Buthelezi did not give further details.

He said the botch-up has led to tightened security, which includes an IT system that will closely monitor which staff make changes to payment profiles, and a policy change so that only employers may amend banking details.

The online claims portal was suspended for three days to tighten internal controls.

"This resulted in delays with May payments, and where fraudulent activities are suspected, the fund will stop the payment, which may result in delays for certain employers," he said.

According to court documents, the day the money landed in Phohole's account, he paid:

In the next two weeks, the four allegedly shifted large tranches of cash between their own accounts  and one another's.

This was an attempt to "confuse the exact source where the funds originally came from", AFU investigator David Mfopha said in court papers.

Itumeleng Masoko spent R25,200 on tombstones for her late aunt and grandmother, the papers show.

Khutsane Tombstones owner Andre Steenkamp said Masoko visited his office to pick out the headstones and paid in full from her cellphone while sitting with his sales manager.

"Days later the bank notified me that the money had been set aside because of suspected fraud and she was very upset when I spoke to her," he said.

In a WhatsApp message to Steenkamp, she said: "[This] is unacceptable. I am so stressed . [I] can't pay my bills even."

Her husband, who received the largest slice of the cash, made a string of payments to his business, Di-L's Finest Cafe in Soshanguve, about 30km north of Pretoria.

He blew R12,500 on two display fridges and R11,500 on a commercial kitchen extraction system. When the Sunday Times visited the cafe this week, it was being renovated.

Masoko confirmed that he had received money from his brother-in-law but declined to comment further.

He and his wife pulled out of a scheduled interview with the Sunday Times, owing to Itumeleng's sudden illness.

Phohole's father confirmed to the Sunday Times that he was a beneficiary of his son's largesse. He said his son would have to explain the origin of the money, but he said he is confident it was "not fraud".

Neither Phohole nor his girlfriend, Zulu, returned repeated calls and messages.

CSG's Kobus Nieuwoudt said the company drew on its cash reserves to cover the UIF shortfall.

"To date we have received nothing from the UIF. We paid most of the workers what we could, but some were left without."

The DA says processing applications for the Covid-19 Temporary Employer/Employee Relief Scheme (Ters) for May should have started in the middle of ...
Politics
1 year ago

With just four days left in May, it's a race to process hundreds of thousands of claims for financial relief.
News
1 year ago

Unemployment insurance funds and pension funds during Covid-19 have been a major concern for employers and employees across the country.
News
1 year ago