'I'd work with Cyril, not David Mabuza': Steenhuisen

Steenhuisen to block any no-confidence vote in Ramaphosa 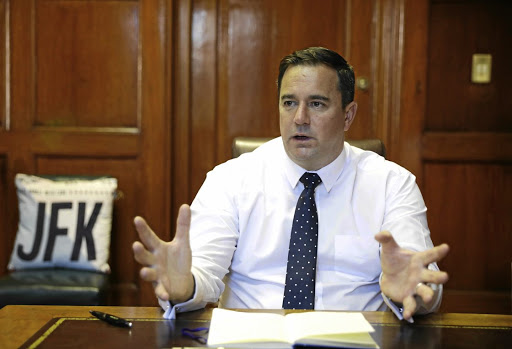 DA leader John Steenhuisen has opened the door to a possible coalition with the ANC should there be a stalemate in the 2024 elections - but only if President Cyril Ramaphosa is still its leader.

Steenhuisen told the Sunday Times this week that the DA is keen to work with "reformists" in the ANC - such as the president - to lift SA out of the doldrums.

However, he said the DA would not become involved in any political marriage that included Deputy President David Mabuza or ANC secretary-general Ace Magashule.

Steenhuisen told the Sunday Times that:

Listen below to an audio clip from Steenhuisen's interview with the Sunday Times:

Steenhuisen said that, given the infighting in the ANC, the DA is anticipating an eventual split in the governing party, which would allow for those who share the same values as the official opposition to come together.

Steenhuisen's endorsement of Ramaphosa could have serious implications for the president in the ANC. Opponents could use it to weaken him ahead of the party's national general council (NGC), possibly claiming that this bolsters accusations that Ramaphosa is a proxy of so-called white monopoly capital.

Steenhuisen's stance marks a significant departure for the DA, which has long been opposed to any co-operation with the ANC.

Steenhuisen said the DA would not support any motion of no confidence in Ramaphosa, especially if it was sponsored by a faction of the ANC, the EFF or any other opposition party.

"If it was to come to a motion of no confidence in the house, would we support it? Absolutely not. I'm certainly not going to open the door for a David Mabuza or somebody else to become the president," he said.

If it was to come to a motion of no confidence in the house, would we support it? Absolutely not. I'm certainly not going to open the door for a David Mabuza or somebody else to become the president.

Steenhuisen said some ANC MPs opposed to Ramaphosa are boldly telling DA MPs in the corridors of parliament that the president's days are numbered. An eventual ANC backbencher rebellion would present an ideal opportunity for the formation of a new coalition that included the DA and "reformists" in the ANC, he said.

"There are ANC MPs who openly say to our MPs that the president's not going to be here after May," he said. The ANC is due to hold a national general council in May, where it's believed Ramaphosa's detractors could table a motion to oust him. The Sunday Times, however, could not independently verify Steenhuisen's claim that a rebellion is brewing against the president.

"The president has got problems in his own party, which is why I think that more than ever before, a strong centred party for growth . makes a perfect ally for the reform agenda within the ANC to find backing.

"Would I rather work with Cyril Ramaphosa than Ace Magashule? Without a shadow of a doubt."

Steenhuisen said the DA ran a weak campaign in the 2019 national and provincial elections under former leader Mmusi Maimane, which was why it lost support. The DA was confused about what it wanted to be and which voters it was targeting.

"The party was unable to deliver a coherent message. Voters don't have time to digest huge chunks; they have got to understand by looking at your poster and being able to understand your message, and the DA tried to focus too much on the trick shots rather than getting the basics right. The messaging was way too diffused.

"People didn't really know who we were, what we were standing for and what the DA was trying to achieve."

He said this was the reason parties such as the EFF and Freedom Front Plus grew their support while the DA lost voters. This was the basis for the review that eventually led to Maimane resigning from the party, said Steenhuisen.

"We ended up having this wishy-washy campaign that, in trying to appeal to everybody, ended up not appealing to anybody. There was no major growth into new markets, and there was a retreat in terms of the base. So we lost on the swings and the roundabouts."

Steenhuisen said it is untrue that under his leadership the DA is working to appeal to the conservative voters it lost in 2019. He insisted that it wants to contest for power nationally, and even co-govern the country through a possible coalition in 2024.

The DA is considering selling its headquarters in Bruma, Johannesburg, as the party faces a serious cash crunch ahead of the local government ...
News
1 year ago

"I want the party to be in government and I believe there is a seismic shakedown in politics coming. I want to be able to position the DA to be at the rational centre of South African politics and to be a strong ally for the growth and prosperity agenda in SA, so that when that high-stakes poker game comes, when the ANC falls below 50% or there is a split within the ANC, we have a significant pile of chips that we are able to put on the table to negotiate a way" to ensure that the party gets into government.

The DA will not become a regional party on his watch, said Steenhuisen.

"I fundamentally disagree with this notion that the DA is interested in being a regional party, a sort of IFP of the Western Cape. Absolutely not. And that's why we are focusing our election campaign on trying to win as many municipalities as possible."

The DA has set its sights on 22 more municipalities where it thinks it can win an outright majority or govern through a coalition. The party is eyeing 11 municipalities in the Northern Cape, five in Gauteng, three in the Eastern Cape, two in KwaZulu-Natal and one in the Free State as areas of possible growth and a springboard to the 2024 national elections. Currently, the party governs 27 municipalities, including SA's administrative and legislative capitals, Tshwane and Cape Town.

It is also the governing party in the Western Cape and is the second-biggest party in the National Assembly, with 84 MPs.

But its leader said the DA will be wary when entering into coalitions in the future.

Steenhuisen admitted the party had been burnt by going into a quasi-coalition with the EFF to govern major metropolitan areas in Gauteng - a decision it regrets.

In a swipe at erstwhile Johannesburg mayor Herman Mashaba, Steenhuisen said he had failed to turn the city around because he was "dancing to the tune of the EFF".

Mashaba will be contesting this year's local government elections under the banner of Action SA.

"The mayor naively at the time felt that if he just threw a few scraps to the crocodile it would be happy," Steenhuisen said. "But over time the crocodile became hungrier and hungrier and it compromised your ability to govern cleanly and accountably because there is more demand . we want the following people appointed, we want the fleet contract."

"Eventually, the mayor was dancing to the EFF tune to the exclusion of his own caucus and to the exclusion of the other coalition partners who were really aggrieved by the fact that they would arrive at a council meeting and the EFF would tell them what was going to happen, and the mayor hadn't taken the other coalition partners into [his] confidence about what was going to happen. It caused friction within the caucus and within the broader coalition."

He said Mashaba resigned as mayor and left the DA out of fear that his own caucus would eventually pass a motion of no confidence in him.

"The caucus was treated with complete disdain, and unfortunately in a party-political system you've got to manage your caucus first, you've got to bring your team with you. They felt excluded, marginalised, victimised and excluded from decision-making."

When entering into coalitions in future, the DA is going to insist on a signed pact.

"Any new coalition that our party will commit to after the local government elections will be based on a written coalition agreement. It will have a chapter setting out the core mission and objectives, what do we hope to achieve in the next five years. It must set out the red lines, saying the following will not be tolerated in a coalition - interference in administration, interference with appointments, and interference with tenders."

Such a pact would, he said, be made publicly available.

The DA on Wednesday said it believed the reshuffling of the Mpumalanga cabinet was a clear reflection of the political factions at play in the ...
Politics
1 year ago

IN QUOTES | David Mabuza wants you to pay your water & electricity bill: 'These services are not free'

The deputy president says South Africans need to pay for basic services like electricity and water.
Politics
1 year ago

Deputy president David Mabuza has called on political leaders to be wary of reiterating divisive statements, including those that make corruption ...
Politics
1 year ago