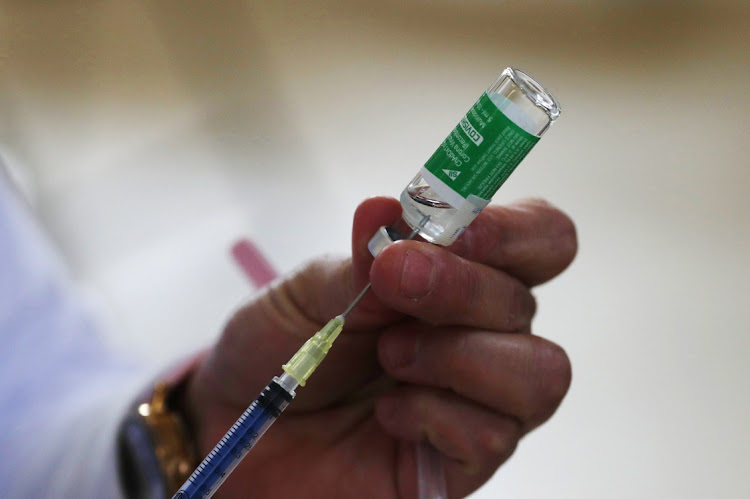 The health department has denied reports that the sale of a million doses of the AstraZeneca vaccine has hit a technical snag, insisting the sale is about to be finalised.

Controversy has surrounded the sale since it was announced last month, after studies showed the vaccine is ineffective against mild and moderate infections of the 501Y.V2 variant dominant in SA.

SA bought the doses from the Serum Institute of India for R75m. They expire on April 30. Despite calls by health experts to keep the AstraZeneca vaccine and roll it out on a voluntary basis to elderly and high-risk people, the government decided to sell it to the AU.

This comes amid concerns that vaccination targets set by the health department for this year will not be met.

"Our negotiations with the Serum Institute of India for the sale to the AU have been concluded," he said. "We are in the final stages of the sale."

Some of the 145,000 health workers vaccinated against Covid-19 have become infected with the virus during the time it takes for the vaccine to become ...
News
1 year ago

Pillay said SA is selling its AstraZeneca doses for the same price it paid for them.

With regard to the sale hold-up, he said: "There is an in-principle agreement with the AU and the relevant countries to purchase the vaccines. Given the sale is to multiple countries and each country has to sign off on the terms, [it] takes time ... We anticipate that [the sale] will be done during the course of next week."

He said that in regard to the purchase of 20-million doses of the Pfizer vaccine, SA should finalise "our agreement with Pfizer next week, which should not disrupt the planned delivery schedule". The doses are due in SA in April.

Professor Linda-Gail Bekker, co-principal investigator on the Johnson & Johnson Covid-19 vaccine implementation study, said there is no new data to support a rollout of AstraZeneca in SA.

"The problem is not that the data pushes you [not to use the vaccine]. The problem is that we don't have data to push us in a positive direction," she said.

Asked about the pressure to use or sell the vaccine before the expiry date of April 30, she said it was unlikely the vaccine would expire by then. "It is like the biltong sell-by date - you know you can eat the biltong for a long time afterwards. You'll probably find the Serum Institute can kick it down the road ... I'd be very surprised if the Serum Institute sold us something you couldn't use after three months."

On the contention that the AstraZeneca vaccine should be rolled out in SA now, she said: "You could say to people, you choose: you can get it if you're willing to take the risk. The problem is that it could be a zero-sum game. If you have risk disinhibition, in other words, people take AstraZeneca and then don't wear masks and go to party, then you actually do harm. That is where I would have reason to pause."

However, Wits professor of vaccinology Shabir Madhi told the Sunday Times the manufacturer will have to do rigorous testing to ensure its shelf life can be extended.

He said SA paid $5.20 (R77.70) per AstraZeneca dose - "twice what EU countries paid. The most likely reason is that we were desperate to get a vaccine because we had delayed in securing access".

He said other African countries through the Covax facility are paying $1 per AstraZeneca dose. Nigeria recently secured 2.8-million doses of AstraZeneca through Covax, and Ghana secured 600,000 doses, he said.

"SA should follow [the World Health Organisation's] advice, which is that countries where our variant is located should use the AstraZeneca vaccine. Scientific advisory groups have concluded that there are strong biological reasons to believe the vaccine will protect against severe disease.

"We have over-interpreted the findings of the South African study, which potentially told us that the vaccine does not protect against mild and moderate infections. The study said nothing about not protecting against severe illness."

Madhi said it should be offered immediately, particularly to those with comorbidities. "The maths is straightforward: either we waste R75m or we take the chance of providing protection to people who would otherwise remain unvaccinated during the next resurgence."

He said even though the stockpile expires in April, "if the people responsible for planning immunisation have been on top of their game, and government has immunisation strategies in place, it should be easy to immunise 1-million people".

"If we do, we will end up with a high-risk population facing the next Covid-19 wave with a massively high risk to severe infection and potential death."

The milestone of 100,000 health-care workers vaccinated was reached on Friday and a new shipment of Johnson & Johnson (J&J) Covid-19 vaccines is ...
News
1 year ago

The more than R10bn allocated to the vaccine rollout in this week's budget should remove the need for business to come up with funding, as well as ...
Business Times
1 year ago