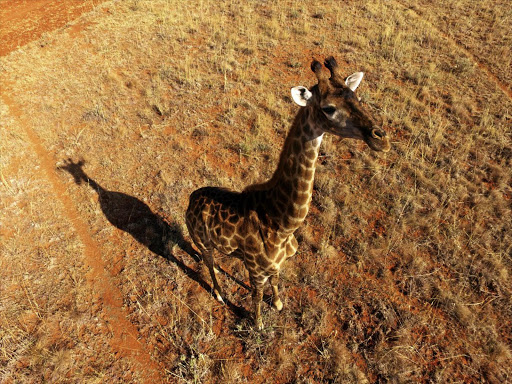 A giraffe seen from a drone.
Image: SUPPLIED

In a bid to save giraffes from extinction, a scientist is using technology such as GPS collars and drones to study them in their shrinking habitat, writes Guy Jepson.

The giraffe cow stands motionless in the crate, its head pressed against the roof. It twitches as the door is unlocked and creaks open.

The towering animal hesitates, then gingerly steps down into the veld, the GoPro action camera attached to its horns rattling slightly.

The wide-angle perspective is breathtaking as the 4m female looks right, then left, scanning swathes of the landscape. Her head is very still as she ambles forward to nuzzle a smaller giraffe which slowly moves into the picture.

It's hard to believe, after viewing the footage, or visiting one of South Africa's many well-stocked private game farms, that the giraffe is under siege.

But the numbers are terrifying. The International Union for Conservation of Nature, which placed the animal on its red list of threatened species in December, says the continent's giraffe population has plummeted by almost 40% from about 151,700 in 1985 to just 97,500 in 2015.

"We call it the silent extinction," says Dr Francois Deacon, a University of the Free State researcher who has led efforts to use GPS tracking collars, GoPros, even camera drones, to study the giraffe, its habitat and battle for survival.

"Back in the day no one really bothered counting giraffes, so it was really just thumb-suck numbers," says Deacon, 32, who works in the university's animal, wildlife and grassland sciences department.

"My estimate is four or five decades ago there probably were close to 400,000 giraffes on the African continent - who knows?"

The Cape giraffe in Southern Africa is thriving, says Deacon, because of effective wildlife management, well-run national parks and a proliferation of private game reserves. Its population numbers have increased from about 15,000 in 2,000 to more than 32,000 today.

But the picture is bleak in East, Central and parts of West Africa where habitat loss - caused mainly by deforestation and farming - illegal hunting, conflict and a woeful lack of public awareness are driving the giraffe to the brink.

The reticulated giraffe of East Africa's savanna suffered an 80% decline in the period measured by the IUCN to about 8,600 animals.

Niger's peralta subspecies has actually increased in number from a perilous 50 to about 400 while Zambia's genetically isolated Thornicroft's giraffe has stabilised at about 600.

"I recently came back from Tanzania - we went to five of the national parks - and saw at least 10 times more elephant than giraffe. We almost saw more rhino than we saw giraffe," says Deacon.

"Giraffe are dying and they're becoming extinct because they're losing habitat. If I can simplify that, what they feed on takes many, many years to grow. When you chop down a tree, that tree probably took 30, 40, 50 or even 100 years to grow."

He believes that Africa is likely to lose "two or three" of its nine giraffe subspecies regardless of conservation efforts.

Deacon, who began working as a field guide in the Kgalagadi Transfrontier Park in 2008 while completing his master's degree, soon realised that giraffes were as underresearched as they were vulnerable.

For his PhD, he decided to use GPS trackers to conduct an extensive study of the animals' choice of habitat, diet and ranges, but South African National Parks, his employer at the time, was reluctant to allow giraffe in the 3.7million hectare park to be collared, fearing for the animals' safety.

Deacon shifted his study area to the privately owned 105,000ha Khamab Kalahari Nature Reserve near the Botswana border and started doing fieldwork for his doctorate in 2011 under the supervision of savanna ecosystems expert Professor Nico Smit.

After securing a raft of permits, they began trialling collar designs on giraffe at the Woodland Hills Wildlife Estate near Bloemfontein.

Deacon is animated as he picks up the giraffe skull in his office to demonstrate how he and Haupt eventually designed a collar that fits over the animal's horns and is strapped, like a horse harness, under its chin.

"We tried it on bulls but we realised it wasn't going to work because they fight and the [GPS] loggers wouldn't stand the impact.

"The strap also had to be made from a special durable material which was chew-proof and waterproof and which, if it got stuck, would not suffocate the animal."

They tranquillised and safely collared a cow from each of the Khamab Kalahari reserve's eight herds, allowing Deacon to accumulate, over two years, a treasure trove of new information on giraffe behaviour, interaction and habitat.

"When you knock down a giraffe for work purposes, there's months of planning that goes into it - paperwork, ethical issues, applications. So that moment, when you remove the collar after two years and your giraffe stands up again and runs off, that achievement, that's it for me.

"I get goosebumps just thinking about it."

"We scientists realised that we had to make giraffes sexy. People need to realise that giraffes are fun animals - that was the idea of making the film. They need to be on TV, kids need to have giraffe toys."

Deacon then worked with Texas filmmakers Iniosante on a new documentary, Last of the Longnecks, which charts the giraffe's slide towards extinction through the eyes of the handful of researchers battling to save it.

He believes the film, which is expected to be broadcast on the National Geographic channel in coming weeks, will prove to be "the biggest contributor to giraffe conservation there's ever been".

The premiere was held in Washington in March at an environmental film festival attended by 30,000 people.

Within weeks, five environmental groups petitioned the US Fish and Wildlife Service to provide endangered species protection to giraffes, arguing that trophy hunters, among them many Americans, were contributing to the animals' demise.

The documentary includes the giraffe's-eye view footage shot from GoPro cameras attached to the animals' horns by what Deacon describes as "a very farmer-like engineering device that we had to design as quickly as possible".

The remotely activated cameras delivered astonishing close-ups of the animals walking, feeding - they close their nostrils to protect them from ants on the twigs and leaves they eat - and interacting.

"The GoPro opened a new world into what we've seen giraffe do," says Deacon.

An advantage of the cameras is that the animals do not have to be tranquillised when they are fitted, making them ideal for studying the behaviour of relocated giraffe.

Last year Deacon joined a team of researchers from the Royal Veterinary College in London, who created a 3-D model of a giraffe moving and the terrain it covers using drones fitted with cameras flying alongside, above and behind the animals.

This helped them understand how much energy giraffe use, their gait and unique locomotion.

Deacon hopes to assemble 20 international researchers at the University of the Free State in October to devise a conservation and management plan for Africa, complete with a comprehensive education strategy, to help save its remaining giraffe and their habitat.

He smiles when asked why people should care whether the giraffe goes extinct.

"There's this glamorous idea that if you've travelled to Africa and you haven't seen a giraffe at sunset, then you've missed half of it. It's the iconic animal of the African continent.

"If we can preserve that and make villagers, local people in rural areas, just as responsible as I am to save them, to teach and make them realise that they are equally responsible to save the animal and the tree it feeds on, to realise the benefits of eco-tourism and living ecosystems with natural animals; I think that's the only way we are going to save the giraffe in Africa."