Opinion: Is it wrong for Kenny Kunene to splurge on his newborn? 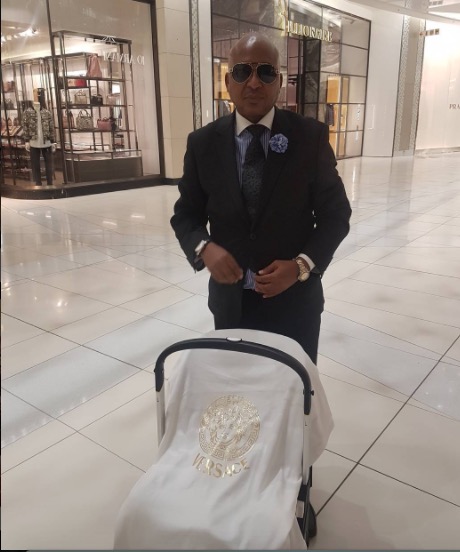 I didn't grow up in an ultra-wealthy family with private jets and designer clothing, but I didn't grow up in absolute poverty either. Like many average South Africans, my family's success story is built on years of hard work and determination from my parents who wanted to give their children a better life than they had.

So when circumstances changed along the years and we could afford the 'finer things' in life, we were always taught to be mindful of the hardships that were endured to attain that that success. We were also taught to never think that we were better than the kid up the road who didn't get to go to university or a brand new car when she turned 18.

So when I first heard that businessman and socialite Kenny Kunene had splurged R80,000 on a one-of-a-kind pram and that his 10-week-old baby's closet was filled with designer labels like as Louis Vuitton, Versace and Gucci I, like many South Africans, was shocked.

Kenny made a pivotal point that struck a chord with me. He said that people are quick to crucify 'deadbeat dads' or parents who haven't worked hard enough to provide for their children. So when an African man had pulled his life together and was doing the opposite, why could people not see it as a change in the vicious cycle that we have become accustomed to.

I think that culturally we have been taught that it was wrong to brag about your wealth. I also found myself questioning if it is so wrong for a parent, any parent, to splurge on their child and want to give their child the best?

The answer is no. It is not wrong for any parent to strive towards providing the best for their child, whether you're an average John Doe plugging away at your 9-5, or a celebrity like Kenny.

I do however feel that, like with anything in life, parenting is a personal journey and there is no right or wrong way.

Let's take Bill Gates for example. He is the world's richest man with an estate of around £86 billion (that's a lot of rands) and has decided to leave most of his fortune to charity.

The Microsoft co-founder said during an interview on This Morning late last year that his three children understood why he had decided to help the world's poorest when he died instead of setting up trust funds.

While one cannot deny that there are millions of people out there who can barely keep their heads above water, let alone afford a pack of nappies for their newborn baby, a celebrity splurging on his or her child after a long road to success isn't a crime. And it definitely isn't wrong.

What I do have a problem with is the flashiness of rubbing your wealth in other people's faces. I think that it should be a case of teaching each other people to be proud of our successes in a more tactful and motivating way.

Take DJ Black Coffee for example. He is a world-renowned musician, who is no doubt cashing in those dollars. However he never flaunts his cars, the gifts he buys for his children or the houses they live in.

Instead, Black Coffee has remained humble in his success and continues to motivate young people by sharing his road to stardom.  Some may question why we should be humble in our success? I always remember what my parents told me about the kid up the road who didn't get to go to university. No one is saying hide your wealth, but I do firmly believe that we should be aware of the poverty that exists around us.

In one such instance Black Coffee and fellow rapper Riky Rick reflected on how the struggles of their past, which included using old newspaper as toilet paper. Black Coffee said for him it was the bucket toilet system that made him push harder in his career.

Another perfect example is rapper Cassper Nyovest who grew up in the dusty streets of Mafikeng and at one stage had nothing to his name. Today he owns two Bentleys and an ultra-luxurious watch collection.

Back to Kenny and the R80,000 pram - I don't think its wrong for him as a doting parent to splurge on his baby. When I have a baby I do hope that I too can afford a Versace blanket but I certainly won't be gloating about it in the face of a friend who can't afford basic prenatal care.