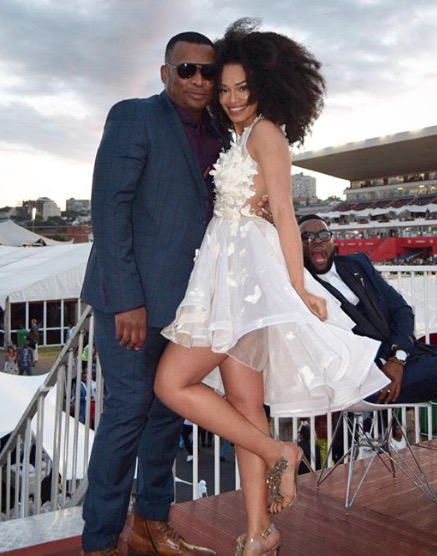 Robert Marawa, who is usually protective of his personal life, has revealed that he confirmed his split from Pearl Thusi to "own the space" and protect both their families from "false stories".

Robert took to Twitter on Sunday night to confirm that he and Pearl broke up months ago.  "I confirm the rumour and speculation that our relationship with Miss Pearl Thusi ended a few months ago. We continue to be good friends though," he tweeted.

During an interview on East Coast Radio on Monday morning, Robert said the split is "what it is".

"I never talk about my private life but I decided to confirm it to protect both sets of families. If you don't own your space, people can twist things and write things that are not true," he said.

When asked how he was feeling, he responded by saying that he woke up "feeling great" this morning.

The sports personality said he did not owe the country any details about his personal life.

"It's none of the peoples' business and the only thing I owe South Africans is what I do on television and radio," he said.

Robert said that it is just a split and there "is no war" and that "no one has died" so people should just accept it.

Ever since Robert confirmed their breakup on Sunday night, Twitter has been inundated with comments and memes from fans.

Robert's confirmation comes two weeks after TshisaLIVE reported that their romance was on the rocks, after sources close to the couple said they were always "breaking up only to reconcile".

'I've lost one of my best friends': Tributes pour in for Mary Makgatho

As news of Mary Makgatho's death spread on Monday, there was an outpouring of tributes from close friends and fans honouring her life.  Mary's ...
TshisaLIVE
3 years ago

Cici supported by her sister in court

Singer Cici was supported by her sister and publicist when she appeared in the Midrand Magistrates Court on Monday morning on charges of common ...
TshisaLIVE
3 years ago

Fans of Robert Marawa and Pearl Thusi went into a state of mourning on Sunday evening after the sports personality confirmed that he and Pearl had ...
TshisaLIVE
3 years ago

As previously reported by TshisaLIVE Robert Marawa's relationship with Pearl Thusi has been under strain for months now. Sources close to the couple ...
TshisaLIVE
3 years ago