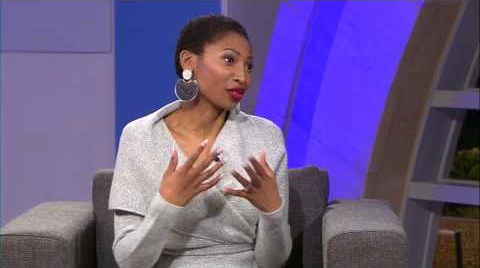 Enhle Mbali Maphumulo talks about her time on 7de Laan

Actress Enhle Mbali Maphumulo has revisited the "pain, abuse and racial slurs " she experienced because of her interracial relationship on 7de Laan.

Last year the actress took to social media to lift the lid on being subjected to racial slurs both by viewers and on set, after her character Nandi, fell in love with and kissed Bernard.

Speaking to Anele on Real Talk with Anele, the actress said  she could handle fans' "disapproval" but the racial comments really hit deep when they came allegedly came from "inside" the production.

"It's really painful. I heard that someone said Bernard (played by Werner Coetser)  is gonna lose viewership now that he's kissed a black girl. I was like, is black a disease?  I don't think people understand what being black is. A simple statement like that shoots really deep. And for me it shot very deep and it was really painful. That's why I took to social [media] platforms because I felt that my voice needs to be heard in this instance," she said.

Enhle, who is now on e.tv's Broken Vows playing a character who is dating a white guy, said that she doesn't refuse roles because of race. She said that her role on 7de Laan wasn't meant to be long and that when it ended she could either extend or leave. She chose to go shoot The Fergusons Film's production Rockville.

"I'm so lucky that right now the people that are watching [Broken Vows] are so open minded and I am not gonna get any slander. I was torn apart on 7de Laan," she said.

Controversial Pastor Mboro had a stern warning to celebrities, who says only support each other when their fame is high, but disregard people when ...
TshisaLIVE
3 years ago

In an interview on Bet Africa called Being Caster Semenya, the athlete opened up about the criticism she faces in the press as well as those people ...
TshisaLIVE
3 years ago

Idols SA judge Somizi has once again revealed the anguish he experienced during a bout of depression, recounting how it left him wishing it was him ...
TshisaLIVE
3 years ago