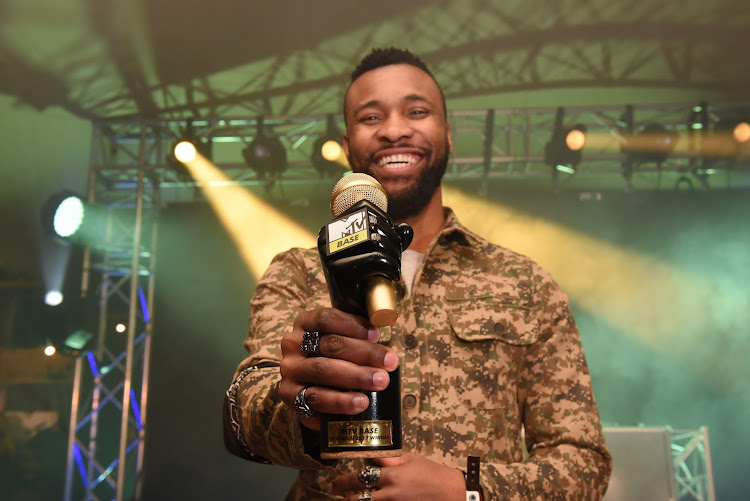 MTV Base VJ Search winner 2017 Tshego Mosupye is ready to get to work
Image: Supplied

Last week Tshego Mosupye was one-third of a trio of hopefuls for the MTV Base VJ title. On Monday morning he woke up next his trophy and he explained that his life has changed for the better.

The 26-year-old from Pretoria was crowned MTV Base VJ winner for 2017 at Icon nightclub in Soweto on Sunday night and he told TshisaLIVE he woke up to a glorious sight of gold trophy reminding him of his win.

"Today, I woke up a VJ and the first thing I noticed when I woke up was my golden mic on the desk. It's an amazing feeling. I feel like my dreams are valid and that I wasn't delusional to think that I had a calling in television presenting," he said.

The winning VJ said his mother cried when he won. He said it was hard to explain the emotions that went through him as his mother beamed with pride.

"There is no greater feeling than knowing that you have made your mother proud. It is priceless. I am happy that she is seeing me become the successful man she groomed me to be. It's hard for parents, especially black parents, to watch their kids wither away due to not being able to live their dreams. But luckily for me, that is not my mother's story," he said.

Tshego made it to the top three together with Gontse Makgoba and Kuhle Adams and the trio were hyping each other up. Tshego said the support they were to each other was invaluable and he believed that it was due to their faith in God.

He said that they had grown very close and had shared a moment where they validated each other's dreams. Tshego added that they assured each other that "God's timing is the best timing".

The VJ said he is ready to work and make the people that voted for him proud.

"This morning when I woke up, I had over 300 messages of people wishing me well. People from home, my pastors, my friends have just been amazing. I can't wait to check out my DMs. That should be interesting," he joked.

Actor and award-winning musician Nakhane Touré has said that even though the threats on life are continuing post the release of the film Inxeba (The ...
TshisaLIVE
3 years ago

AKA has shown his haters that he's winning this life thing, adding a BMW i8 to his growing car collection now worth over R2.6-million.
TshisaLIVE
3 years ago

Singer Winnie Khumalo arrived at the Mzansi Viewers' Choice Awards on Saturday in a wheelchair and explained to TshisaLIVE that she was in pain after ...
TshisaLIVE
3 years ago

From Somizi's daughter to actress: Bahumi chats about her SABC 2 gig

Bahumi Madisakwane is ready to step out away from the "celebrity child" title and has revealed that by bagging an acting gig on a popular drama on ...
TshisaLIVE
3 years ago

Somizi let out his inner Diana Ross this past weekend when he hosted the red carpet for MTV Base Africa at the MTV Video Music Awards in LA on Sunday.
TshisaLIVE
3 years ago
Next Article