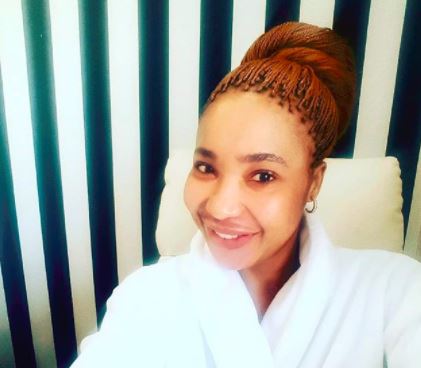 Mshoza has dismissed reports that she's pregnant.
Image: Via Instagram

Mshoza has poured cold water on tabloid reports that claimed she's expecting a bundle of joy with hubby, Thuthukani Mvula.

However, speaking to TshisaLIVE Mshoza dismissed the reports, explaining that she has no idea what might have sparked the rumours. Mshoza said at the moment her focus was on her music career and upcoming tour.

"No (it's not true). I have no idea where the rumours even came from because I have no plans to have a baby any time soon. I am planning on going on tour, so I can't be pregnant and be on tour."

This is also not the first time that Mshoza has faced pregnancy rumours. Ever since she traditionally tied the knot to Thuthukani in November last year, the rumours have popped up regularly on social media.

Kwaito star Mshoza may have had a turbulent love life, but since getting married to Thuthukani Mvula, the musician has said she is happier than ...
TshisaLIVE
4 years ago

Shortly after her traditional wedding, Mshoza told TshisaLIVE that she was on cloud nine.

She described her husband as a man who loves and respects her.

"Everything went well. I am happy, I mean I married a man I love and respect, who loves and respects me back," Mshoza told TshisaLIVE.

The kwaito artist shared that although her husband is "conservative" he knew who she was and loves her unconditionally.

Since she got hitched Mshoza has been flourishing. She has been working on her music and enjoying life. And, just one look through her Instagram proves this.

For all those who were ready to go baby gift shopping... Uhm y'all gon have to wait a lil bit longer neh?

Step Ahead Productions came up with the coins to pay for Brickz's bail.
TshisaLIVE
4 years ago

"No one seems to know anything (about it)".
TshisaLIVE
4 years ago

16-year-old is signed by Avicii
TshisaLIVE
4 years ago

A whole lot of ass!
TshisaLIVE
4 years ago

Every possible question you have about Musa Mseleku wanting a fifth wife, we have the answers!
TshisaLIVE
4 years ago