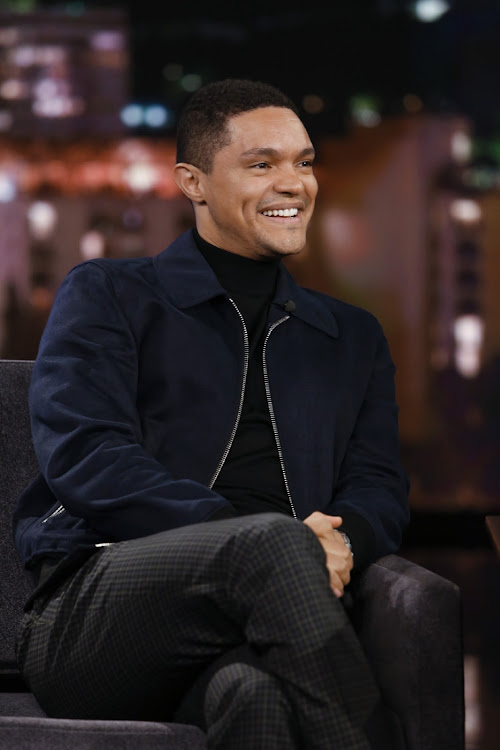 Trevor Noah’s 'The Daily Show' has been nominated in the category of Best Talk/Topical Show.
Image: Getty Images

Trevor Noah’s The Daily Show looks to be one of the favourites to win in Sunday night's MTV Movie & TV Awards, at the Barker Hanger in Santa Monica, California.

The Daily Show has been nominated in the category of Best Talk/Topical Show and is up against The Drew Barrymore Show, The Late Show with Stephen Colbert, The Kelly Clarkson Show, and The Tonight Show Starring Jimmy Fallon.

SA-born comedian Trevor Noah walked away with his first Emmy this weekend at the award's Creative Arts ceremony in LA, taking the top prize for his ...
TshisaLIVE
4 years ago

2022 has gotten off to an excellent start for the 38-year-old comedian.

He won three NAACP Image Awards in the categories of Outstanding Talk Series, Host and Short-Form Series; hosted the 64th Grammy Awards in April for the second year in a row; and hosted the prestigious White House Correspondents Dinner last month, where his “roasting” of US President Joe Biden became an internet sensation.

That, paired with a jam-packed schedule of shows in his Back to Abnormal world tour, in which the Emmy award-winning comedian performed to sold-out arenas throughout Europe and Scandinavia in the last two weeks. Noah will resume his world tour on June 17 and will tour Canada and the US all the way through April of next year.

Despite his demanding schedule, Noah took a break from his tour last weekend to attend the Champions League Final in Paris, with actors Will Ferrell and Damson Idris.

“Champions League final with my stepbrothers,” Noah wrote on Instagram underneath photos taken with the actors.

Posing with his buddies for a selfie on Instagram, Noah wrote, “What a wonderful journey it’s been and continues to be. When we met 14 years ago, one of us had no car, half of us had never left the country and we all used to watch tennis on TV. Now we’re at the French Open, watching tennis live and discussing how to get our friend a car. Memories are nothing without the people you share them with.”

"We’re at the French Open, watching tennis live and discussing how to get our friend a car," said Trevor Noah.
TshisaLIVE
2 months ago

With nearly 140 million followers on TikTok, Lame has catapulted to the number two position on the popular social media platform, for his wildly humorous takes on life hack videos.

Half-Nigerian Chike Ozah, who co-directed the 2022 Netflix documentary film jeen-yuhs: A Kanye Trilogy, based on the rise of rapper and fashion designer Kanye west (now known as Ye) with Clarence “Coodie” Simmons Jr — has been nominated in the Best Music Documentary category.

Meanwhile, half South African Doja Cat leads the pack with six nominations at the upcoming BET Awards on June 26. Born Amala Ratna Zandile Dlamini in Los Angeles to SA actor Dumisani Dlamini and American painter Deborah Sawyer, Doja Cat has been nominated in the categories of Best Female R&B/Pop Artist, Best Female Hip Hop Artist, Album of the Year for Planet Her, BET Her for Woman, Video of the Year for Kiss Me More featuring Sza, and Best Collaboration for Kiss Me More featuring Sza.

Dumisani boasted about his daughter's achievement in a now-deleted Instagram post, thanking Doja Cat's fans for their support.
TshisaLIVE
4 months ago

Amapiano twin brothers Bandile and Banele Mbere, better known as Major League DJs, are the only SA nominees in the category of Best International Act in the BET Awards. “Mommy your boys are nominated for a BET Award ... Piano to the world!” tweeted the Zulu-Xhosa duo, who were born in Boston, Massachusetts, in the US but grew up and lived in Sandton, Gauteng. Other Africa nominees in the category include Nigerian singer Fireboy DML, Cameroonian-French singer/songwriter Tayc, Congolese singer/songwriterFally Ipupa, and Nigerian singer Tems. This year’s nominees reflect Black excellence across music, television, film, and sports.

"South Africans like reaching, how did we contribute to Zandile Dlamini's success for us to claim her achievement as if it represents South Africa?" ...
TshisaLIVE
4 months ago

EDITORIAL | Music is part of SA’s soul. The state needs to help keep the beat alive