In a recent survey of 7,000 domestic workers, SweepSouth found that one in five felt their mental health had been harmed in the past year by stressors brought on by Covid-19's economic fallout. 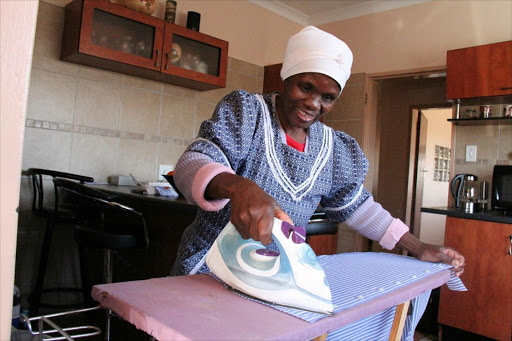 It’s called the silent killer and, alarmingly, it's on the rise among domestic workers.

Depression, says a new report by SweepSouth, is becoming more common in domestic workers in SA.

In a recent survey of 7,000 domestic workers across the country, we found that one in five felt their mental health had been harmed in the past year by stressors brought on by the pandemic’s economic fallout. Of those who’d sought expert help, depression was the diagnosis in 72% of the cases, with anxiety following behind.

Domestic workers' earnings are still falling below a living wage in SA, according to the fourth annual SweepSouth report.
News
3 months ago

Feeling depressed about their circumstances should come as no surprise considering that the report, which annually researches the pay and working conditions of domestic workers, revealed that this year unemployment and spiralling debt topped the list of issues affecting their mental health.

The report contains sobering statistics, such as that 79% of the women we polled are the main breadwinners in the house, 64% are single parents and, on average, support four dependants. Considering the fact that the average income of a South African domestic worker is just R2,536 a month — which needs to cover rent, food, transport and schooling — it’s easy to see why so many are feeling overwhelmed.

We conduct this report every year, and last year it was clear that domestic workers’  earnings had been severely hurt by lockdown restrictions.

The situation has lingered on into 2021 and, to make matters worse, this year has shown an added pressure being placed on food spending, opening up domestic workers and their families to a severe risk of malnutrition.

The Covid-19 pandemic has undoubtedly brought in a significant mental health burden at family level. While mental illness exists at all levels of society, it’s undoubtedly more closely associated with poverty, with the SweepSouth report’s findings in line with global studies about how living near or below the poverty line increases the risk of significant mental health problems.

Studies by the Centers for Disease Control and Prevention in the US have found that 8.7% of people who have incomes below the poverty level report significant psychological distress. And research published in Science mag has shown that those with the lowest incomes in society are typically 1.5 to three times more likely than the rich to experience depression or anxiety.

While anti-poverty interventions to better low-income earners’ lives are needed in SA, addressing their current mindset should be a priority too.

The treatment typically given to sufferers of depression among wealthier socioeconomic levels is completely out of reach for hundreds of thousands of people who need it. Investment in mental health treatment has long been overdue — it’s now become urgent.

Many of the studies examining the role that poverty plays in mental illness come to the same conclusion: depression significantly affects people in poverty. Not addressing mental health issues and the subsequent long-term effects among low-income earners is akin to seeing a smoking ember in dry grass and hoping it won’t start a fire.

Living below the poverty line and experiencing mental health problems creates serious challenges. Experts have found that mental disorders — largely, the common illnesses of depression and anxiety — are the single largest cause of disability worldwide, giving rise to one-seventh of all the disabilities in the world.

Depression is known to debilitate sufferers, cause poor overall health, and directly affect the way people think and respond. It also often has a significant affect on relationships with family and friends, particularly when those affected are caregivers with many responsibilities. It’s little wonder, then, that it’s called the greatest thief of productive life.

Research examining the causal relationship between poverty and common mental disorders in low- and middle-income countries suggests that initiatives which promote security, education, social, welfare and health safety nets are more likely to protect the mental health of populations, playing a vital role in getting those in poverty on track to a better life.

Given the disastrous effect the pandemic has had on the poor — who already inhabit a world of worry and financial uncertainty — finding solutions has become even more pressing.

If you take into consideration the associated economic benefits of improved mental health, urgent interventions should be a part of our government — and community and faith-based organisations’ —  anti-poverty toolkit to prevent those most economically vulnerable from simply becoming yet another statistic in the pandemic’s graveyard of economic woes.

Aisha Pandor is the CEO of SweepSouth.

Parents, trainers and coaches benefit from a better understanding of how the brain works
Opinion & Analysis
2 months ago

That blah feeling brought on by the pandemic? Psychologists have a name for it

Don't worry, you're not alone — we're all just languishing
Lifestyle
2 months ago

There has been an outpouring of support for gymnast Simone Biles after she withdrew from the Tokyo Olympic Games all round team event midway through ...
Sport
2 months ago

With the Olympics still digesting U.S. gymnast Simone Biles's stunning exit from the team event, champion women made a splash in Tokyo on Wednesday ...
Sport
3 months ago

Japan's Osaka bundled out of Tokyo 2020 third round

Japan's great hope for tennis gold Naomi Osaka was beaten on Tuesday in the third round of the Tokyo 2020 Olympics tournament, saying she had not ...
Sport
3 months ago

When Dr Nicolene Steyn realised she may become the youngest person to obtain a doctoral degree at North West University's faculty of law, she thought ...
News
3 months ago