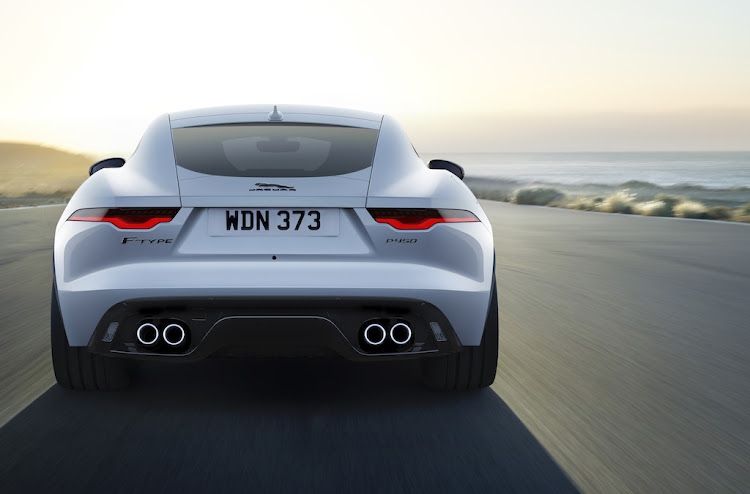 The new Jaguar F-Type P450 will arrive in SA during the second half of 2021.
Image: Supplied

The local Jaguar F-Type lineup is set to be bolstered with the imminent arrival of the new P450 model. Available as a coupé or convertible, this svelte newcomer slots in below the flagship P575 and sports a supercharged 5.0-litre V8 motor tuned to deliver 331kW and 580Nm worth of torque. Sent to either the rear or all four wheels (the choice is yours) via an eight-speed Quickshift transmission, Jaguar claims that all F-Type P450 variants will claw their way to 100km/h in a mere 4.6 seconds. Top speed? You're looking at 285km/h.

From launch, customers will be able to purchase the P450 R-Dynamic Black model that gets numerous styling upgrades including 20-inch five split-spoke wheels finished in gloss black. Complementing these perfectly, is your pick of three metallic paints: Santorini Black, Eiger Grey or Firenze Red. Inside the cabin you'll discover slimline performance seats that offer 12-way adjustment and come trimmed in Windsor leather, with a choice of Ebony with Light Oyster contrast stitching or racier Mars with Flame Red stitching.

The Jaguar F-Type P450 and P450 R-Dynamic Black models are planned for SA introduction during the second half of 2021. Pricing will be announced closer to the time.

Ford on Thursday whipped the covers off its eye-catching EcoSport Black. Based on the EcoSport Ambiente 1.5 Auto, this newcomer hits the tarmac with ...
Motoring
1 year ago

Toyota unveils new GR 86 and, yes, it's coming to SA

Toyota has unveiled its all-new GR 86 sports car. Built to replace the GT 86 that's been with us since 2012, this back-to-basics rear-wheel drive ...
Motoring
1 year ago

Audi SA has dropped early Easter treats in the shape of the new RS Q3 and RS Q3 Sportback, two high-performance SUVs that can easily cling to the ...
Motoring
1 year ago