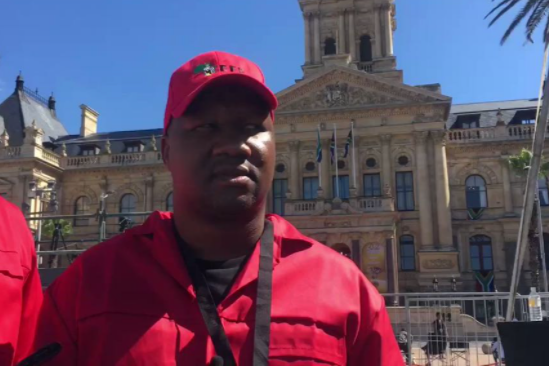 EFF secretary-general Marshall Dlamini blamed the ANC for the change in venue for the state of the nation address.
Image: Maryam Adams

South Africans are eagerly awaiting the start of the state of the nation address (Sona) at 7pm on Thursday.

President Cyril Ramaphosa will deliver the address, which will include his plans to bring about change in the country.

EFF secretary-general Marshall Dlamini told the media the change of venue was forced on them by the incompetence of the ANC.

“We are not supposed to be here. We’re supposed to be in parliament. We know we don’t have government. We have people who go there for salaries and to drink alcohol. It is incompetence that has brought us here,” he said.

EFF deputy president Floyd Shivambu said: “Generally there’s a crisis and things are getting worse. Literally everything under Ramaphosa is collapsing in this country. Ramaphosa is not steering the ship in the right direction.”

People turned out in large numbers as pressure and anger mounted outside city hall, with grievances ranging from safety to meaningful change.

“The change of venue was forced on us by the incompetence of the ANC,” says Marshall Dlamini, Secretary-General of the EFF ahead of the #SONA2022.@TimesLIVE pic.twitter.com/OrboJrg5fx

About 60 protesters are here at City Hall for the ‘walking bus’ organisation. They raising various grievances from safety to ‘meaningful change’. #SONA2022 pic.twitter.com/l5XE1ePhkR

"We're just here because we are members of Parliament to listen to lies again." #SONA2022 pic.twitter.com/au0VQaykzE

POLL | What are you most looking forward to hearing at Sona?

Police minister Bheki Cele had strong words for anyone considering disrupting the state of the nation address as law enforcement maintained a strong ...
Video & Podcasts
3 months ago