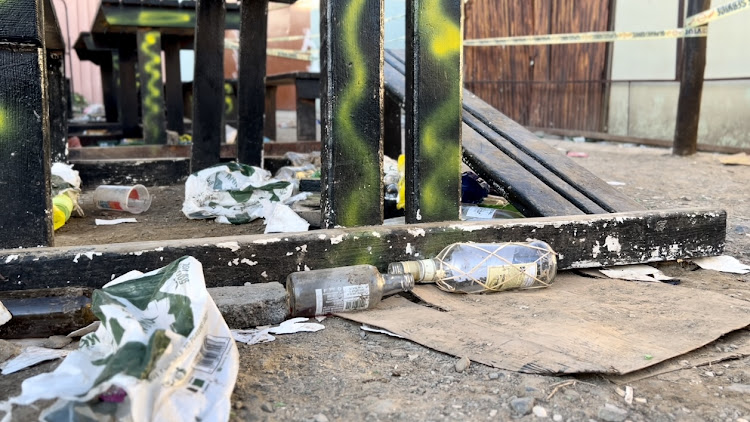 Empty alcohol bottles scattered outside the only entry and exit point at the tavern in East London after 21 teens died.
Image: Catherine White

Residents of Scenery Park in East London allege that the police and liquor board failed to respond to complaints about the Enyobeni tavern at least a month before 21 minors died on Sunday.

The Eastern Cape Liquor Board told TimesLIVE it will open a criminal case against the liquor trader today.

“We have been waiting for a month for the liquor officer to come and explain to us,” said Mbiko

According to Mbiko, the only people who “did their job” were those in the community policing forum.

Eastern Cape Liquor Board spokesperson Mgwebi Msiya claimed they were not aware of non-compliance issues raised in East London.

“We are saddened and shocked by this. It would have been channelled through the police but we didn't receive anything from them. That doesn’t mean the complaint wasn’t made,” Msiya said.

JUST IN: Flowers outside Yobeni club where 21 died @TimesLIVE pic.twitter.com/ov0kEFYZmH

Mbiko said: “We want our government and the police, who say they are protecting us, to step up. They did not protect our children.

“There is nothing our government is doing to change the lives of our children. You have to change lives by giving them skills and playgrounds maintained by the municipality.

“That is the least we can ask our government to do. If we can have libraries and playgrounds, it will minimise other things. Sport united us before 1990 and all we are asking is that our government can make our playgrounds proper.

“Do something, [police minister] Bheki Cele. After you have cried, wipe your tears and take action.”

Talking about underage drinking, a neighbour to the Enyobeni tavern, who wanted to remain anonymous, said: “This area is known for substance abuse. They mix all sorts of things when they drink. Everybody knows it.”

At a prayer gathering with city officials and families of the deceased, Afika Siziba, a district manager from the social development department, admitted her department has limited resources to handle issues in the communities it serves.

“If we bury 13-year-olds because they were in taverns, South Africa must wake up. We must face the truth,” Siziba said.

A joint funeral, paid for by the government, will take place at the Scenery Park sports grounds on June 6.

“I wish I didn’t lie to my parents.” These are the words of a 14-year-old girl from East London who had told her family she would be attending a ...
News
1 month ago

The SA Democratic Teachers' Union says the Enyobeni tavern tragedy is a stark reminder of the "appalling conditions" township youth live under where ...
News
1 month ago

Bereaved parents and families in Scenery Park, East London, gathered for a prayer meeting on Monday after the deaths of 21 young people at the ...
News
1 month ago