Zimbabwe human rights lawyer: Nothing is going to change 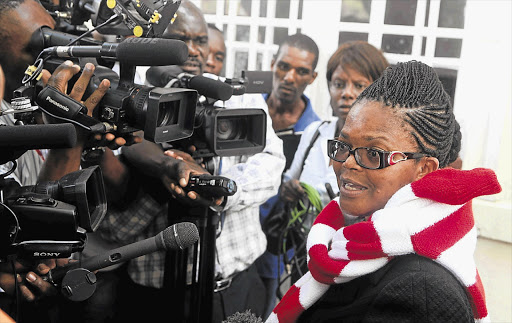 Nothing is going to change in Zimbabwe‚ because President Robert Mugabe and the military leaders who seized power made decisions together for the last 37 years.

Beatrice Mtetwa made the remarks on Thursday night during a question and answer session after she delivered the annual Carlos Cardoso Memorial Lecture at the University of Witwatersrand (Wits). The lecture this year formed part of the Global Investigative Journalism Conference‚ which is currently taking place at the university.

Carlos Cardoso was a Mozambican journalist who was assassinated in Maputo in 2000 during his investigations into corruption at the country’s biggest bank and senior political figures.

Zimbabwe: South Africa is hardly qualified as a mediator

It is laughable that President Jacob Zuma is the point man on the Zimbabwean crisis when he needs the protection of a police battalion to go outside ...
Opinion & Analysis
3 years ago

Mtetwa said: “The difficulty is the people who are discussing are not people of different minds. The only reason that they are having this discussion is because they have had a disagreement. It’s like a husband and a wife having a disagreement and they then decide that they’ll speak to each other.”

Mtetwa added that politicians have a way of “putting cosmetics on things”.

She lambasted the current leadership for not having held a press conference since taking control to inform the world about what is happening in Zimbabwe.

“The culture of openness just isn’t there [in Zimbabwe].”

She believes things might be different if Africa supervises the transition. However‚ she believes several African leaders envy Mugabe and even consider him the “regional Godfather”.

“Do you think President Zuma would like to be Mugabe? Can you imagine him being able to do what Mugabe does and get away with it? They are in awe of him. They would love to do what he does‚” Mtetwa said.

“I look at the leaders in the region as being really more like a trade union of presidents. If you scratch my back‚ I’ll scratch your back.”

Mtetwa has campaigned for freedom of speech in Zimbabwe‚ where media freedom is stifled. In 2005‚ she won the International Press Freedom Award of the Committee to Protect Journalists.

Mtetwa believes the Zimbabwean media has never been free‚ despite gaining independence.

“In Zimbabwe‚ historically‚ we have just had this culture of a media that has always been stifled‚ even by those who claimed to have liberated us.”

Mtetwa said investigative journalism is “absolutely crucial” to democracy because it shines a light on where “politicians feed the wolves”.

She‚ however‚ criticised investigative journalism for focusing too much on politicians and not scrutinising the private sector with the same rigour.

“It will help‚ because the consequences on private players‚ when we talk about corruption‚ are far more than those politicians have to face.”

Challenges ahead for Zimbabwe's economy - with or without Mugabe

Zimbabwe’s economy has fallen to the 20th biggest in sub-Saharan Africa from 10th when President Robert Mugabe came into power almost four decades ...
Business
3 years ago

Hit one snake and another slithers out

Grace Mugabe, the wife of Zimbabwe's long-time ruler Robert Mugabe, is said to have told supporters: "No one will remove the president, except God."
Ideas
3 years ago