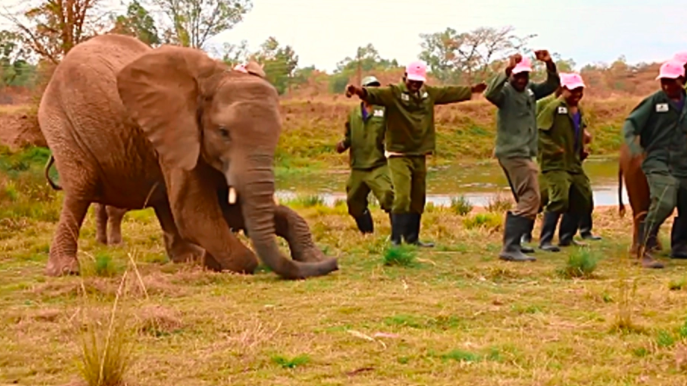 An elephant from the Zimbabwe Elephant Nursery gets down to 'Jerusalema' with staff.
Image: Screenshots

Animals are the latest to join in on the human fun that is the Jerusalema dance challenge.

In a viral video, elephants and giraffes from the Wild Is Life Trust's Zimbabwe Elephant Nursery (ZEN) take part in the challenge with staff members.

The organisation is based in Harare, Zimbabwe, and is a sanctuary for injured wildlife.

The heartwarming video has been viewed by many and has garnered over 12,000 likes on Facebook.

We had SO much fun creating this #jerusalemachallenge video- the whole team got in on the action. Even Moyo makes a guest appearance and shows us how to boogy. Dance is the language that our soul speaks! 🕺🏽🦒🐘💃🏽 Music credit @masterkgsa #Wildislife_zen #cultureofcare #onebyone

Dubbed something close to the Macarena craze, the song has sparked a global dance challenge frenzy. It's even President Cyril Ramaphosa's favourite song at the moment.

On Wednesday, Ramaphosa called for SA to take up the dance challenge on September 24, Heritage Day.

People all over the world - including health-care workers, metro police officers, priests and finance minister Tito Mboweni - have been sharing videos of themselves dancing to the song under the hashtag #JerusalemaChallenge.

The music video has now garnered over 140 million streams on YouTube, making it the first SA track to reach such heights. The hit track is also the most Shazamed song in the world.

Speaking to TshisaLIVE in July, Master KG said he was blown away at how much love the song has been receiving.

“It's so beautiful to see how Jerusalema has taken over the world, to see how far it has gone. The song did amazing at home, in December 2019 charting on every radio station. It ruled the streets and people created memories to the song.”

President Cyril Ramaphosa spoke highly of Master KG's Jerusalema, SA musicians and SA dance during his address to the nation on Wednesday.
News
1 year ago