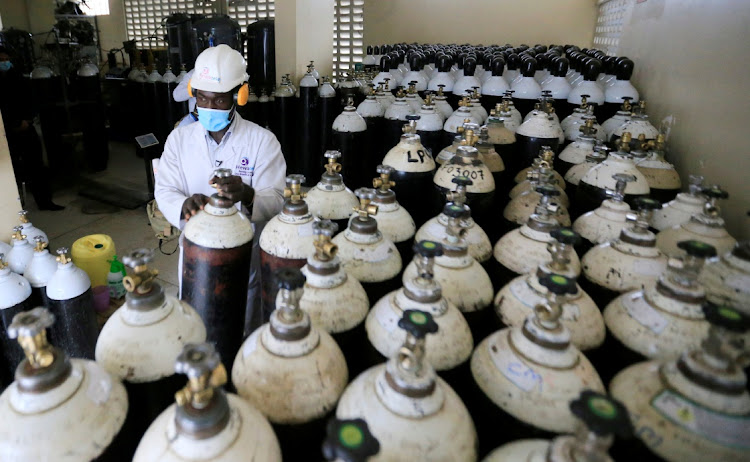 Kenya's oxygen production firm Hewatele is doubling production this year to keep up with surging demand from hospitals that are treating critically ill Covid-19 patients, the company said.

Demand for the commodity has more than doubled to 880 tonnes from 410 tonnes before the pandemic, the ministry of health said, causing a steep shortage due to lack of installed capacity.

The East African nation is confronting a severe fourth wave of Covid-19 infections that is putting pressure on health facilities.

“This country doesn't have capacity to put 2,000 patients under high flow oxygen at the same time. We need to do something urgently,” said Bernard Olayo, founder of the company.

The firm produces oxygen by the chemical method, using a naturally occurring salt to separate nitrogen from the air.

“It (chemical method) has limitations because you can't produce a lot of oxygen,” Olayo said.

To resolve that issue, Hewatele will invest another $15 million next year to build an air separation unit to produce liquid oxygen, which will lead to a ten-fold output increase to 20 tonnes per day, he said.

Kenya has only one such plant, which belongs to industrial gases firm BOC, said Olayo, who was inspired to produce oxygen for hospitals by his experience as a young government doctor in the west of the country two decades ago.

Hewatele's expansion is being financed by a combination of debt and equity from international financiers, he said.

But the process will not be easy since the pandemic has driven up demand for oxygen and for components used by oxygen plants.

Hewatele, which supplies 200 hospitals with oxygen, has three production plants around the country to help keep costs down. Still, a litre of liquid oxygen costs 120-150 Kenyan shillings, compared with 10 shillings internationally.

International donors failed the continent by not supplying promised doses, but millions will start arriving this month
Africa
3 months ago

A new global study shows SA moved from 45 to 21 out of 114 countries on the World Giving Index.
News
4 months ago