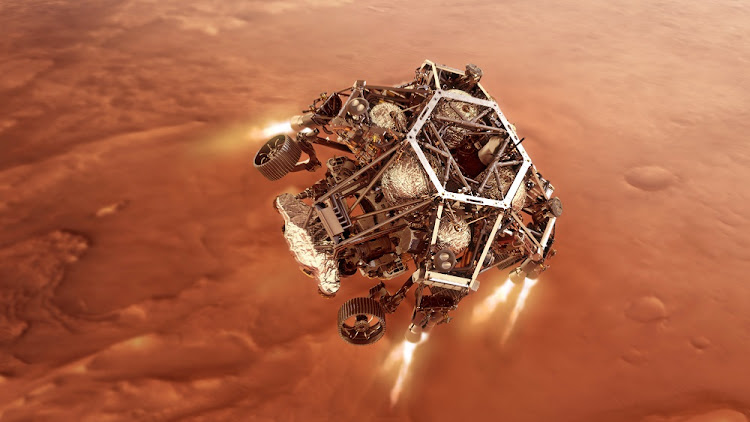 An illustration depicting how NASA’s Perseverance rover will fire up its descent stage engines as it nears the Martian surface.
Image: NASA/JPL-Caltech

Nasa's Mars rover Perseverance, the most advanced robotic astrobiology lab ever flown to another world, neared the end of its seven-month, 470m km journey on Wednesday, on target for a daredevil landing attempt on the red planet.

Hurtling through space across the last 240,000km of its voyage, Perseverance was headed for a touchdown set for Thursday inside a vast basin called Jezero Crater, site of a long-vanished Martian lake bed.

Mission managers at Nasa's Jet Propulsion Laboratory (JPL) near Los Angeles said on Wednesday they were hopeful the six-wheeled, SUV-sized rover would arrive safely on a flat plain beside towering cliffs at the edge of an ancient river delta.

Engineers hope to confirm the landing, and possibly receive a first surface image, shortly after touchdown, set for 8.55pm GMT (10.55pm in SA) , from signals relayed to Earth by one of several Mars orbiters.

The chief objective of the two-year, $2.7bn (R39.62bn) mission is to search for signs of microbial organisms that may have flourished on Mars about three billion years ago, when the planet was warmer, wetter and presumably more hospitable to life.

Larger and more sophisticated than any of the four mobile science vehicles Nasa landed on Mars before it, Perseverance is designed to extract rock samples for analysis back on Earth – the first such specimens ever collected by humankind from another planet. 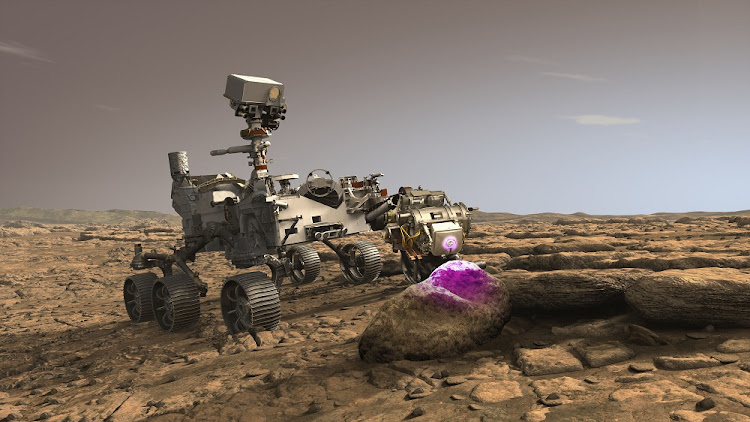 In this illustration, Nasa's Perseverance Mars rover uses the Planetary Instrument for X-ray Lithochemistry (PIXL). Located on the turret at the end of the rover's robotic arm, the X-ray spectrometer will help search for signs of ancient microbial life in rocks.
Image: NASA/JPL-Caltech

Two future missions are planned to retrieve the samples and return them to Nasa in the next decade.

The rover, still packed inside the Mars-bound “cruise” stage of the spacecraft, appears “comfortably” on track for a “bull's- eye” landing under fair Martian skies, said Al Chen, head of JPL's descent and landing team.

“That's pretty incredible considering our last manoeuvre was back in December,” Chen told an online briefing.

Engineers sent the spacecraft a command days ago activating its autopilot systems for the final phase of its flight, and Chen anticipates no need for further course correction from mission control.

Nevertheless, Chen acknowledged that getting the rover safely onto Martian soil was the riskiest part of the mission, saying: “We just can't guarantee success.”

Building on nearly 20 US outings to Mars dating back to the 1965 Mariner flyby, the success of Perseverance would set the stage for conclusively showing whether life has ever existed beyond Earth, while paving the way for eventually sending humans to explore the fourth planet from the sun.

Perseverance is carrying some novel demonstration projects as well. They include a miniature helicopter built to test the first powered, controlled flight of an aircraft on another planet, and a device to convert carbon dioxide in Mars' atmosphere into pure oxygen. 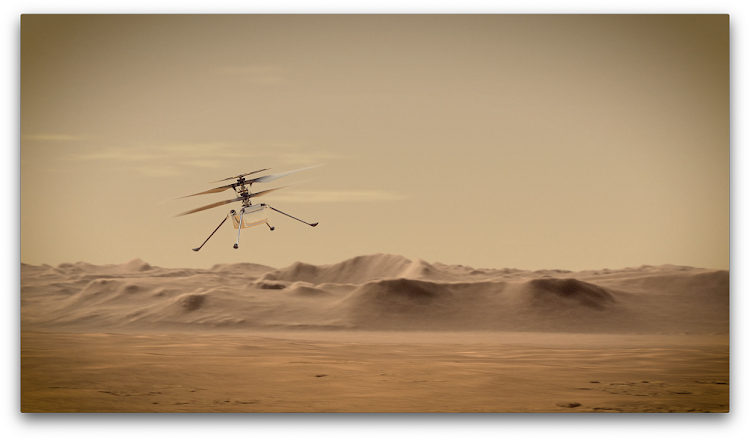 An artist's concept of Nasa's Ingenuity Mars helicopter flying through the red planet's skies. Ingenuity, a technology experiment, will be the first aircraft to attempt controlled flight on another planet.
Image: NASA/JPL-Caltech

The rover also comes with a weather station, 19 cameras and even two microphones that Nasa hopes will give greater sensory depth to the images it records.

Safe arrival hinges on a self-guided, seemingly far-fetched sequence of events unfolding with flawless precision within seven minutes – the time it should take the rover to get from the top of the Martian atmosphere to the floor of Jezero Crater.

The spacecraft is expected to pierce Mars' atmosphere at 19,300km/h and angled to produce slight aerodynamic lift while jet thrusters adjust its trajectory.

A jarring, supersonic parachute inflation to further slow the descent will give way to deployment of a jet-powered “sky crane” vehicle that will fly to a safe landing spot, lower the rover on tethers, then zip off to crash a safe distance away.

If all goes well, the interval that Nasa half-jokingly calls the “seven minutes of terror” will end with the rover intact amid a Martian landscape long coveted by scientists for its rich potential as a geobiological laboratory.

What makes the crater's terrain – deeply carved by long-vanished flows of liquid water – so tantalising to scientists also makes it especially treacherous as a landing zone, requiring self-navigation technology never before used in spaceflight.

As Chen put it on Wednesday: “It's full of the stuff that scientists want to see but stuff that I don't want to land on.”

To find out more about the mission to Mars:

‘That was one heck of a ride’: Musk blasts into a new era of space travel

Chuck Yeager, the man with the ‘right stuff’ to break the sound barrier, dies

Yeager’s first plane ride made him throw up, but he went on to make aviation history in the Bell X-1
World
1 year ago