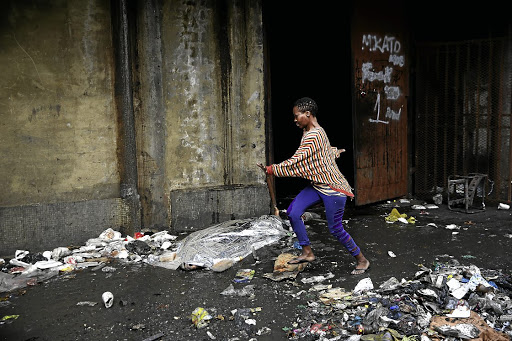 CRUEL ESCAPE: The body of a Mozambican man who jumped from the blazing Cape York building in downtown Johannesburg to escape the flames yesterday morning lies covered on the pavement Picture: ALON SKUY

For MaButhelezi, the clothes, blankets and food she lost in a blaze that consumed the dilapidated Johannesburg building she called home are the least of what she lost in th past 14 years she lived there.

"My brother was shot right here on the fifth floor several years ago," MaButhelezi said, standing outside the Cape York building in central Johannesburg.

"He had been appointed caretaker," she said.

Now, MaButhelezi, who is arguably one of Cape York's longest- standing tenants, has followed in her brother's footsteps, taking on the position of leading the committee for the residents.

The Cape York Building at the corners of Rahima Moosa (formerly Jeppe) and Nugget Streets in Johannesburg‚ which caught fire on Wednesday morning ...
News
4 years ago

According to her, the building belonged to Mozambicans who left the country several years ago.

Dressed in a white short-sleeved T-shirt and open-toed sandals, her dry skin exposed to the cold, she said that she, her children and grandchild were left with only the clothes on their backs.

Seven of her eight children, aged between three and 14, were all born in this building.

"We have lost everything in this fire. Even my stock is gone," she said of her small spaza shop inside the building, which sold mostly tinned food to residents.

In a bid to salvage anything that she could, MaButhelezi ran down the street, chasing after young men whom she had seen carrying the metal frame of a bed.

Seven people were killed in the blaze. One died after leaping out of a window on the third floor. His lifeless body lay on the ground, with his worn-out sneakers protruding from the silver foil which covered his corpse.

Six others died inside the building, some from smoke inhalation, and others from being ravaged by the flames.

Seven more residents were taken to hospital for treatment.

Deto Mabali said the man who died was his neighbour back in Nagoya in Mozambique.

Naming him as Mikita Tokene, he said the deceased man used to live three houses away from him.

"I later met him addicted to nyaope and looking dirty in the streets of Johannesburg and we have since kept contact.

"I often visited him here as I live in Rosettenville and sell [goods] in the city.

"His friend who lives here called me this morning and told me that he had died jumping.

"I am saddened and I will immediately call back home and ask them to inform his family about this tragedy," he said soberly.

Khabonina Mfiki, originally from Zola in Soweto, said: "I am sad to see Mikita, our Maputo friend, lying dead helplessly.''

"He was a funny, humble and kind person. All he did was fix cars and sell sweets. He was not a harmful person."

An estimated 50 people were rescued from the building after six fire engines and 34 firefighters responded to calls for help.

The first report of the blaze was received at 8.49am yesterday.

The cause of the fire is still unknown and is being investigated by law-enforcement authorities.

MaButhelezi said she heard screams in the hallway and was told a fire had started.

"There was a person who was smoking next to the generator and somehow he started the fire. He ran away once the building caught alight," MaButhelezi said.

Mfiki also believes the fire was started with a cigarette butt carelessly tossed away.

"We use generators and when the petrol spills the place becomes susceptible to fires.

"Apparently, the person who started it was smoking."

MaButhelezi said: "This is the third fire that has happened here.

"The first one happened a few years ago when one girl dumped her boyfriend and he decided to pour petrol and burn the room."

Four people, including a baby, died in an August 2013 fire on the seventh floor of the building.

Yesterday scores of people, some sitting alongside their children, sat on the pavements close to the burnt-out building, which had been cordoned off by police.

As MaButhelezi walked down the street, she pointed at several young men, some of whom seemed to be under the influence.

"They also lost everything," she said, asking them whether they had registered their names on the displaced residents list.

According to Mfiki, life in the Cape York building revolves around drug addiction.

"When you have a need for a fix you don't even think of anything, not even food," she said.

Mbali Shirindza said the building had no landlord and the residents did not pay rent.

"Anyone that's stranded is welcome in here. The place is mostly an open area where you can just sleep. It's like sleeping outside, except there's a roof.

"We are overcrowded and we get sick and spread the illnesses among ourselves.

"There are shacks inside. It's filthy, and rats are one of us, too," said Shirindza.

But as soon as the police, the media and ambulances left, residents would return to the building, MaButhelezi said.

Following reports of a break-in at the headquarters of the Hawks in Silverton‚ Pretoria‚ on Wednesday morning‚ we look at some of the break-ins and ...
News
4 years ago

"We have nowhere else to go."

Mfiki also said: "This is our home. We are going back in after this. We have no choice."

The City of Johannesburg has promised to assist the stranded residents and block access to the ruined building.

Mayor Herman Mashaba, who was at the scene yesterday, said Johannesburg's disaster management unit was assisting the building's residents with finding alternative accommodation, blankets and food.

"The building has been declared a crime scene for the duration of this investigation. We have agreed with the building's owner that it will be sealed once the investigation is complete," he said.

Mashaba warned slumlords that he intended to shut them down.

"I remain committed to working with [disaster services] to get all hijacked buildings in the city declared unsafe and unsanitary.

"Raids of hijacked buildings will also be increased."

His plan, with the help of property developers and government entities, is to transform rundown and hijacked buildings into better quality low-cost housing for residents and into affordable rental spaces for small businesses.