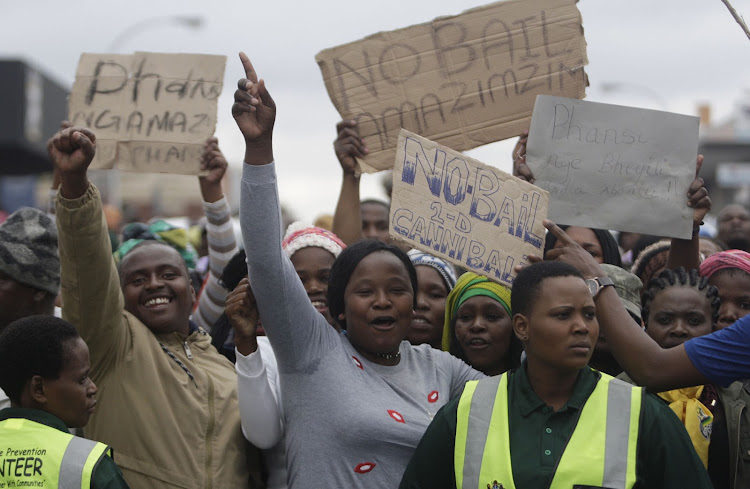 Protesters outside the Estcourt Magistrate's court on Monday, 8 August. Thursday’s crowd gathered outside the court began shouting and hurling bins when they heard that charges had been withdrawn against two of the seven men accused of cannibalism.
Image: KHAYA NGWENYA

In court‚ state prosecutor Israel Zuma read out a directive from the KwaZulu-Natal director of public prosecutions to Magistrate Arthi Sukhraj that charges against Masondo‚ Madlala and Ndlovu were to be withdrawn provisionally pending further investigation‚ as per discussion with the investigating office in the matter. The three were released and the others remained in custody.

Allegations of cannibalism in Estcourt have set the normally quiet KwaZulu-Natal Midlands town back several decades, its mayor, Jabu Mbhele, said on ...
News
4 years ago

When the crowd who had gathered outside the court heard that charges had been withdrawn against the accused‚ they began shouting and hurling bins. Police fired rubber bullets and tear gas to contain the crowd. One woman was injured during the fracas.

Earlier‚ the accused were heard chanting‚ "We will eat you‚" to the gathering crowd as they waited inside police vans to be led into the building.

Mbatha walked into the local police station in September and proclaimed he was tired of being forced to eat human flesh.

Mbatha named a neighbour with whom he had fought earlier in the day as the alleged mastermind behind the flesh-eating plot.

The news rocked the small town in the KwaZulu-Natal Midlands.

A bail hearing has been set for October 27.

Cannibalism has set our town back decades‚ says Estcourt mayor

Allegations of cannibalism in Estcourt have set the normally quiet KwaZulu-Natal Midlands town back several decades‚ its mayor‚ Jabu Mbhele‚ said on ...
News
4 years ago

One of the seven men accused of eating human flesh wants to plead guilty‚ the Estcourt Magistrate’s Court heard on Thursday.
News
4 years ago

Security beefed up ahead of ‘cannibals’ court date

With six men accused of eating human flesh due to appear in an Estcourt court on Thursday‚ police have beefed up security in the KwaZulu-Natal ...
News
4 years ago