Capetonians will have rations cut to 25l per person per day if dam levels drop below 13.5% 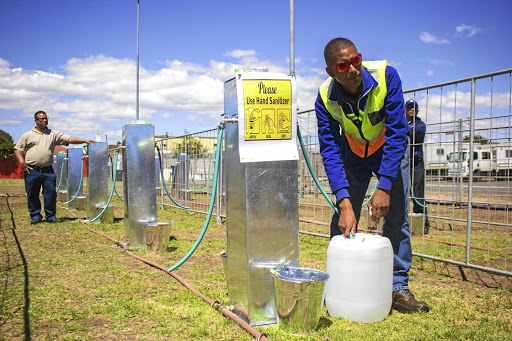 CAN DO: Brandon Herringer, a City of Cape Town plumber, uses a water point Cape Town residents will use when 'day zero' arrives Picture: Anthony Molyneaux

People will have to make do with 25litres of water per day for washing, cooking and personal hygiene if dam levels drop below 13.5% in Cape Town.

Mayor Patricia de Lille has described what life could be like after "day zero" - if dams supplying the city reach critical levels.

In a bid to stave off the impact of this potential crisis, the provincial government has already started drilling boreholes at some state hospitals.

"I want to bring you into my confidence to tell you what will happen if day zero arrives. Dam levels must at least be at 13.5%. If they go below that, that is the day we will turn off the taps," said De Lille on Thursday.

"We have to exclude the densely populated areas like the townships. If we turn the taps off there, we face significant risks in those areas like disease."

Hospitals in the Western Cape face disaster if the taps run dry - a prospect that is looming for the first half of 2018. Now‚ in a bid to stave off ...
News
3 years ago

The rest of Cape Town will have to collect water from 200 sites around the city."

She said police and the defence force would be on standby. Officials had predicted that "day zero" would arrive in March 2018 but water-saving endeavours have pushed that date back to May 2018.

Hospitals in the province require 1.8 million kilolitres of water per year to operate.

Chris Jack, a researcher at the Climate System Analysis Group at the University of Cape Town, said boreholes were helpful but groundwater extraction "can have negative impacts such as land sinking, salt water intrusion ... and a drop in quality".

Cabinet has raised concern that South Africa has not yet escaped the drought situation and that meaningful rainfall may only come at the beginning of ...
News
3 years ago

Gift of the Givers boosts quest for water in Beaufort West

Humanitarian aid organisation Gift of the Givers is pouring millions into a “crisis intervention plan” to prevent the taps running dry in the ...
News
3 years ago

The City of Cape Town has attributed part of the drop in dam levels in the past week to hot weather and winds.
News
3 years ago

One by one South Africa's rural towns have succumbed as a catastrophic drought tightens its grip, turning vast areas into ground zero.
News
3 years ago