Dagga ruling - how it all started 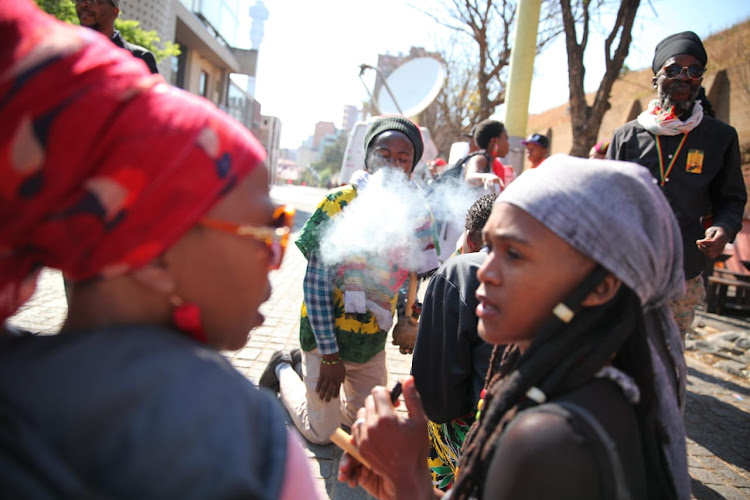 Members of the Rastafarian community smoke marijuana outside the Constitutional Court in Johannesburg on September 18, 2018, where the court decriminalised adults smoking dagga at home.
Image: Alaister Russell/The Sunday Times

“Garreth Prince defeated Babylon‚” screamed a man repeatedly in the Constitutional Court after it ruled that the ban on private use and cultivation of dagga at home was unconstitutional.

The judgment agreed to by every judge of the court effectively decriminalises the personal use of dagga in a private space.

Justice Raymond Zondo was frequently interrupted when reading a summary of the judgment by cheers‚ screams and applause.

The case was brought by Rastafarian Garreth Prince and leader of the Dagga Party Jeremy Acton who argued that the ban on use of dagga at home violated several constitutional rights.

In April 2017‚ the Western Cape High Court found the ban on adult home use violated the constitutional right to privacy.

The Constitutional Court had to confirm the judgment‚ which it did on Tuesday.

Afterwards Rastafarians sang and cheered outside court and said they would make September 18 a national holiday for them to remember the victory.

They called Prince who brought the case “Ganga Prince”‚ referring to the slang name for marijuana.

“Ganga Prince. After 18 years we are free‚” shouted a man in the crowd.

When he tried to be admitted as a lawyer‚ he could not be because he was arrested for possessing dagga in 1989 as a student.

He said police had targeted and searched him when he was a student because he was a Rastafarian.

He lost his case in the Constitutional Court asking for dagga to be permitted for religious use in 2002.

Today‚ he won the right in the same court to smoke dagga. He represented himself in court without a lawyer.

He said outside court “dagga must be used to liberate the country…the green economy must create jobs.

“We have defeated the police state.”

The ruling does not allow smoking in front of children‚ in public or in front of adults‚ who do not wish to be in the presence of dagga smokers.

Jeremy Acton‚ who also brought the case‚ was first arrested with dagga in 2011 on his farm 15 kilometres outside the small town of Montague for smoking at home.

He can now smoke in peace. “I have been getting stoned at home for years‚” he said. The court found that privacy was not just confined to the home. Acton said he interpreted this to mean that people could refuse to be searched for dagga saying their body or personal bags were private.

He was delighted at the ruling and said dagga smokers could no longer be harassed by police.

The jubilant mood on Tuesday was best summed up when a man left the Constitutional Court and screamed: “We are free. After thousands of years Rastafarians‚ we are free.”

There were scenes of jubilation as the Constitutional Court on Tuesday decriminalised adults smoking dagga at home and growing enough marijuana for ...
News
3 years ago

IN FULL: This is how the ConCourt decided you can smoke dagga at home

The Constitutional Court handed down judgment in the application for the confirmation of an order of constitutional invalidity made by the High Court ...
News
3 years ago

Light it up! Mzansi reacts to dagga being legal at home

People across the country have flooded Twitter with comments about dagga being legal to smoke at home.
TshisaLIVE
3 years ago