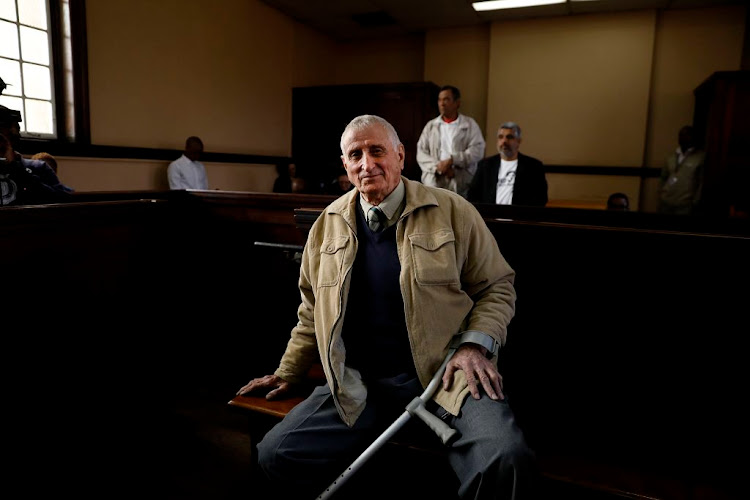 Joao Rodrigues, the apartheid policeman implicated in the murder of slain activist Ahmed Timol, is seen in the dock at the Johannesburg Magistrate's Court on July 30, 2018.
Image: ALON SKUY

A trial date for Ahmed Timol murder accused João “Jan” Rodrigues has been set for January 28 in 2019.

Johannesburg high court Judge Ramarumo Monama said on Monday there was an indication that Rodrigues‚ 79‚ a former member of the security police‚ intended to bring an application for a permanent stay of prosecution.

Monama said the application for a permanent stay of prosecution would be heard before the trial date.

The judge invited any interested parties who wanted to be heard to notify the prosecution on or before November 5.

“The court will‚ if necessary‚ sit even during the recess. The idea is that come January 28 2019‚ the application must have received the attention of the court‚” Monama said.

Timol‚ an anti-apartheid activist‚ fell from the 10th floor of the then John Vorster Square police station in Johannesburg in 1971 where he had been detained.

In the reopened inquest in 2018‚ Judge Billy Mothle found that Timol’s death was caused by him being pushed from the 10th floor of the building.

Timol was one of 73 activists who died in police custody between 1963 and 1990. Police at the time ascribed all the deaths to suicide or accidents.

After Rodrigues’s brief appearance in court‚ NPA south Gauteng spokesperson Phindi Mjonondwane said the state had indicated months ago that it was ready for trial.

She said the state would oppose the application by Rodrigues.

“As the state‚ we will be opposing the application because in as far as the law is concerned‚ cases like murder and rape and any other serious case‚ they do not prescribe.

“It does not matter how far back the incident happened but so long as the state finds that there is someone who can be held liable for an alleged crime‚ then that case will be brought to court‚ including this one. So this one is no exception. Age and the duration argument cannot hold water‚” she said.

Timol’s nephew‚ Imtiaz Cajee‚ took comfort in the fact that a trial date had been set.

“We have reached a watershed moment. Let his legal team argue on what basis are they searching and looking for a permanent stay of prosecution.

“Papers have been filed. We need to study those particular papers and we look forward to the state’s responses. But the positive aspect is that the trial date has been set‚” Cajee said.

Former apartheid-era policeman Joao Rodrigues is planning to plead not guilty to a charge of murdering activist Ahmed Timol in 1971.
News
3 years ago