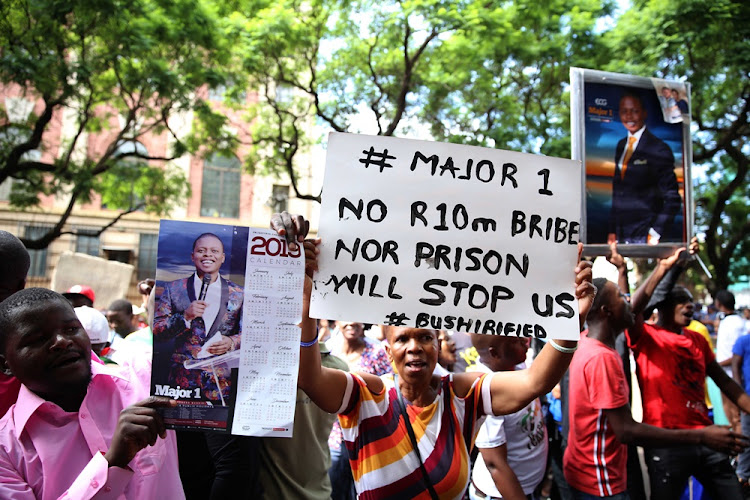 Supporters of Shepherd Bushiri came out in numbers to support him and his wife at the Pretoria Specialised Commercial Crimes Court.
Image: Thapelo Morebudi/The Sunday Times

The Hawks on Monday afternoon slammed claims that they had a personal vendetta against church leader Shepherd Bushiri.

"People will always talk. Let them talk because we are here to work and that is our duty," said police spokesperson Brig Hangwani Mulaudzi.

"We don't look at who we are investigating and the state of the person. If you start doing that, you are making a mistake."

He and his wife Mary, who run several business enterprises in South Africa and abroad, were arrested on Friday on fraud and money laundering charges involving more than R15m. Mulaudzi said on Friday that the arrest took place at a "lavish hotel in Rustenburg".

IN PICTURES | 'I want my daddy': Prophet Bushiri supporters march for his release

Hundreds of supporters of Prophet Shepherd Bushiri are marching through the streets of Pretoria, demanding his release from police custody - after ...
News
3 years ago

"The Hawks’ case against the pair concerns alleged offences of fraud, money laundering and contravention of the Prevention of Organised Crime Act (POCA). The crimes were committed from 2015 in relation to exchange control regulations related to foreign currency in an amount of $1,147,200 [about R15.3m]," said Mulaudzi after their arrest.

Hundreds of Enlightened Christian Gathering (ECG) church members flocked to the court on Monday morning. They threatened to boycott the upcoming 2019 general elections if Bushiri was not released.

They carried placards with messages of support, such as: "Major 1, innocent". Others held framed photos of Bushiri. Many chanted: "We want our father. You touch a prophet, you will see!"

A woman who was barred from entering court warned: "You are provoking God himself - do you know that?"

After learning that their "prophet" would spend another two nights behind bars, the crowd began marching through the streets near the court. Some prayed on their knees and appeared to be speaking in tongues.

"I will sleep on the street until my papa [Bushiri] is released - I don't care," one member said.

The crowd also sprayed a marked Hawks car with "anointed oil", shouting "Fire! Fire!" as they did so. Police pushed the crowd away from the car.

Another popular but controversial pastor, Paseka "Mboro" Motsoeneng, was at the court to support Bushiri. He told Bushiri's supporters outside court that they needed to respect the police, warning them that if anything negative happened outside court, the media would report on it.

"Respect your leader because the name that matters is his name. Your father will always be your father," Mboro told them.

While scores of supporters prayed outside court on Monday, many others took to social media to show their support for Shepherd Bushiri.
News
3 years ago

City Press reported that the Asset Forfeiture Unit (AFU), a branch of the National Prosecuting Authority (NPA), had filed a preservation order seeking to seize the Bushiris' assets, pending the finalisation of the criminal case against them.

According to the paper, the AFU had already filed an application at the North Gauteng High Court seeking permission to seize the Bushiris' luxury houses and cars, as well as the self-styled prophet’s Gulfstream private jet, which is parked in a private hangar at Lanseria Airport in Johannesburg.

The NPA said they would comment later. "Before an order is granted, we do not comment. If we were to confirm something that is not yet granted, we would really be counterproductive," said spokesperson Luvuyo Mfaku.

"Once the order is granted, then only will we give comment."

Bushiri and his wife are expected back in court on Wednesday.

Shepherd Bushiri, leader of the Enlightened Christian Gathering Church, and his wife Mary Bushiri, appeared before the Pretoria Specialised Commercial Crimes Court on February 4 2019. The couple were arrested on February 1 2019 on fraud and money laundering charges.

Enlightened Christian Gathering Church members were adamant on Monday that Prophet Shepherd Bushiri was innocent – and threatened not to vote if he ...
News
3 years ago

Two of South Africa's wealthiest preachers were at a court in Pretoria on Monday: Shepherd Bushiri was due in the dock on fraud and money laundering ...
News
3 years ago