Umhlanga beaches forced to shut due to deluge of debris 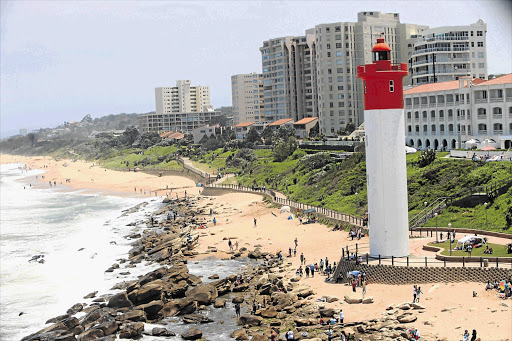 Umhlanga beaches were closed on Thursday due to debris from heavy rains that lashed greater Durban earlier this week.
Image: JACKIE CLAUSEN

Debris-ravaged beaches in the posh seaside town of Umhlanga have been closed.

The Umhlanga Rocks urban improvement precinct (UIP) announced on Thursday that lifeguards had decided to shut the beaches "due to debris and dirty water flushed from the river into the sea after the heavy rains".

"They will recheck the water at midday and reassess the situation," said Cara Reilly of the UIP.

Torrential rains pounding KwaZulu-Natal not only caused devastating flooding and mudslides that have left up to 70 people dead, they also brought the province to the brink of an environmental disaster.

As mop-up operations continued and President Cyril Ramaphosa visited the affected areas on Wednesday, environmental activists in Bayhead and Durban Harbour worked tirelessly against a deluge of plastic flushed out of the city’s stormwater drains.

Numerous organisations have pledged to clean up the beaches and harbour at the weekend.

Residents in parts of KZN are picking up the pieces of what remains of their belongings and their homes. This after the province was wrecked by the ...
News
3 years ago

Now KZN is drowning in plastic after deadly floods

Torrential rains pounding KwaZulu-Natal not only caused devastating flooding and mudslides that left more than 60 people dead, it also brought the ...
News
3 years ago

One of the worst floods in recent history has claimed more than 50 lives in KwaZulu-Natal and the devastation is spread across the province.
News
3 years ago