Don't ask guards if you can hold their guns, and other tips to help prevent cash-in-transit heists 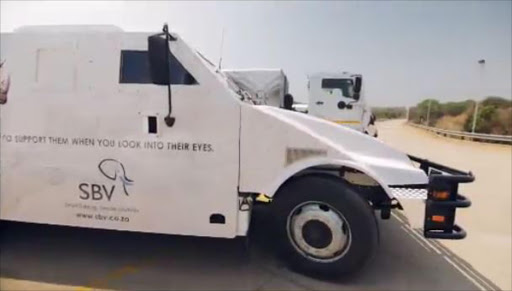 SBV has given some tips on how members of the public can make things easier for cash-in-transit security personnel.
Image: SBV Securities

Cash transporting company SBV on Monday said it was concerned about allegations that members of the public were sometimes a distraction to cash-in-transit (CIT) guards as they carried out their duties.

“Protection officers may seem brash and unfriendly at times, but they are trained to be solely focused on the job at hand,” said Mark Barrett, CEO of SBV Services.

He said guards often had to deal with weird requests from members of the public.

“We have had reports of members of the public who insist that our officers move the vehicle or ask to hold the firearms they carry,” said Barrett.

In a statement issued on Tuesday, the group gave guidelines on how members of the public could help the guards carry out their duties safely, and help to prevent heists.

The first tip was basic.

“It is important for the public to desist from asking officers questions, or block the route to cash machines with trolleys, for example. This kind of distraction is a safety and security risk for both the officer and the public,” said Barrett.

Members of the public were urged to avoid the gun-yielding officers, saying approaching them caused alarm.

“They are trained to interpret this as a tactic to take their attention off their job,” SBV said.

Tip number two was, when using an escalator or a lift, make room for guards to pass by and leave the premises quickly.

Barrett said people should be mindful that the guards were given a set amount of time to carry out their duties, and all this formed part of the security measures.

“Armoured vehicles park in places that allow easy and swift access to pick-up points so protection officers can get in and out quickly, so make sure you don’t park them in,” SBV urged.

Members of the public were also urged to avoid areas where the guards could clearly be seen carrying out their duties.

“If an ATM is being filled or emptied, rather leave the area and come back when you know it has been completed,” the company said.

Most importantly, if one comes across a heist, avoid tampering with the scene. After previous heists, there have been reports of community members helping themselves to cash left behind.

Video footage shows how onlookers flocked to the scene of a brazen cash-in-transit heist at an intersection on the R566 on the N4 north of Pretoria - ...
News
2 years ago

The public was also urged to be the eyes and ears of the guards. They were advised to contact the police if they identified any potentially dangerous situations.

Barrett stressed, however, that the SBV officers were not above the law.

“We are aware of certain instances where vehicles are parked in areas that are not demarcated for parking. Our protection officers are required to adhere to the laws and regulations of the country and to be polite and respectful towards others. If you are unhappy with how our officers are driving or parking, instead of speaking to them directly, please telephone 0860 555 999, which is also printed on the back of our vehicles,” he said.

He called on members of the public who may have tip-offs or information about potential security threats to contact SBV’s early warning robbery hotline.

“This line is active 24/7 and members of the public can contact 083 408 7029 to provide information anonymously to SBV’s investigations team. All callers can be assured that confidentiality is maintained,” the company said.

A cash-in-transit security guard was fatally shot while another was wounded during a heist at Boxer Superstores in Motherwell on Thursday.
News
2 years ago

A shootout between police and suspected cash-in-transit robbers travelling in a taxi left three people dead and eight arrested outside Cape Town.
News
2 years ago