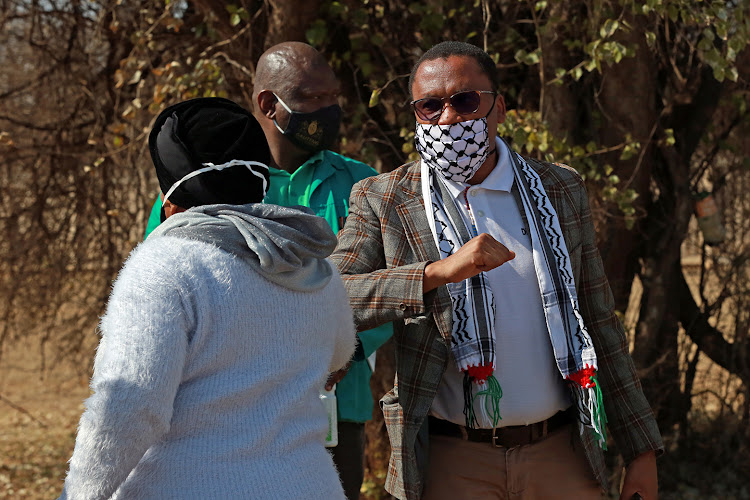 Dr Bandile Masuku, right, is to take a temporary leave of absence while an investigation is conducted into the PPE tender allegations.
Image: Thapelo Morebudi/The Sunday Times

Some South Africans have taken to social media to welcome the decision by the Gauteng government to ask provincial health MEC Bandile Masuku to take a leave of absence pending the investigation into the personal protective equipment (PPE) tender allegations.

One Twitter user said the allegations against the MEC have now dimmed his “bright light” and tainted his reputation.

Masuku is facing allegations that he awarded a PPE tender of R125 million to Royal Bhaca project, a company owned by Thandisizwe Diko, the husband of presidential spokesperson, Khusela Diko.

The MEC, his wife, Joburg MMC of group corporate and shared services, Loyiso Masuku, and the presidency spokesperson will be investigated by the ANC's integrity commission regarding the irregularities.

On Thursday, Gauteng Premier David Makhura said more than 100 companies are under investigation regarding the PPE tenders in the province. On allegations levelled against Masuku, he said they have tainted the good work he's done during the fight against Covid-19.

“These allegations have also damaged the work that the MEC for health, as the lead MEC, Dr Masuku, has been doing. He has been leading our team in the province on this front very well and I must say that I am disappointed,” he said.

Dr. Bandile #Masuku must just accept that he was used by his own wife and the #Diko couple... He was coming in second to Lesufi, but he's bright light has now been dimmed pic.twitter.com/wRV47Dv3VB

One cannot ignore the seriousness with which @GautengProvince premier @David_Makhura seems to be confronting his administration.

Whilst we await the outcome of investigation re MEC @bandilemasuku and others, it would be wise to not pass judgement. The allegations are damning.

If we were to investigate all politicians, their spouses, children and family members for corruption and apply the same principle as they did with #BandileMasuku there would be no one left in government not even the President himself #CyrilMustGo

Bandile masuku this one 🚩🚩🚩🚩🚩🚩🚩🚩🚩🚩🚩🚩. What a joke. Must be removed from his position with immediate effect. pic.twitter.com/2UjtHpHOh9

What is Bandile Masuku waiting for? Why is he not resigning? 😒

Why cancel the contract if u didn't do anything wrong. They are just corrupt, full stop!!! Khusela, Bandile Masuku and his wife must all resign from their positions

Dr Bandile Masuku was doing a good job at Gauteng it shameful that his image has been Compromised by friendship of Khusela Diko and his Wife. There is something to learn after all. pic.twitter.com/OtY6p5tchY

Bandile Masuku and Khusela Diko are proof that young people are in the ANC with hope that their turn to loot will come, nothing else.#CyrilMustGo #ANCMustFall

The Bandile Masuku story is a sad one. Most of us were rooting for him. We all wanted him to succeed.

The ANC in Gauteng will on Thursday give an update on what steps the province plans to take to deal with allegations of corruption in the procurement ...
Politics
2 years ago

COVID-19 WRAP | Will Bandile Masuku fall on his sword amidst Covid-19 tender scandal?

Masuku says he is not involved in nor does he influence tender procurement processes. What's your take?
News
2 years ago

Transport MEC Jacob Mamabolo has been appointed acting MEC of health in Gauteng after Bandile Masuku temporarily stepped aside pending an ...
Politics
2 years ago