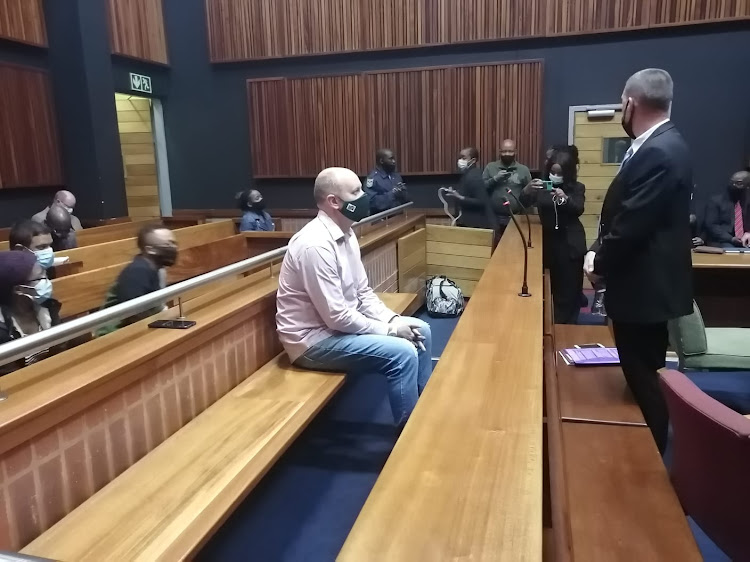 Former VBS Mutual Bank CFO Phillip Truter at the Palm Ridge magistrate's court on Wednesday. He has been jailed after reaching a plea and sentence agreement with the state.
Image: Ernest Mabuza

Former VBS Mutual Bank chief financial officer Phillip Truter was on Wednesday sentenced to an effective seven years in prison for his role in the looting of the bank.

Truter was the eighth suspect who appeared in the Johannesburg Specialised Commercial Crimes Court, sitting at the Palm Ridge magistrate's court, in connection with the looting of the bank. When he made his first appearance in July, Truter indicated he intended on pleading guilty to the charges he was facing.

Truter faced six counts: two of fraud and one count each of money laundering, corruption, racketeering and failure to submit a tax return.

The prosecution on Wednesday first requested the separation of trials in respect of Truter. The court granted the application.

Truter reached a plea and sentence agreement with the state, whereby he pleaded guilty to all six counts.

Former VBS Mutual Bank CFO Phillip Truter on Wednesday pleaded guilty to six counts related to the looting of funds at the bank.
News
6 months ago

“The accused does not have any excuse in law for his actions,” prosecutor Hein van der Merwe read from the agreement.

He also admitted to offering to accept a gratification of R5m from former VBS chairperson Tshifhiwa Matodzi.

Van der Merwe said in terms of a sentence, all counts should be treated as one and that Truter should be sentenced to a 10-year jail term, three years of which would be suspended for five years.

The court said it was satisfied that the sentence was just and competent and confirmed it as the sentence of the court.

'Such honesty is welcomed'

The National Prosecuting Authority (NPA) welcomed the judgment in Truter's case and said this meant the prosecution was more ready than it was before.

Spokesperson Sipho Ngwema said Truter has undertaken to cooperate with the state’s case, which was investigated by the Hawks and guided by the NPA.

"The law enforcement agencies always encourage either whistle-blowers or accused persons who want to come clean to make a full, frank, honest and open disclosure about their involvement and their ill-gotten gains," he said.

The total amount of money they are accused of stealing by creating fictitious accounts is more than R1.5bn
News
9 months ago

He said there were times where, especially in the realm of corruption, when law enforcement needed the cooperation of insiders.

"Many of these schemes are fairly closed and only a very close inside group will have the know-how of the shenanigans that transpired. someone like Truter who decides to take responsibility for his actions will always be encouraged to talk to the state and such honesty is welcomed."

Ngwema said when the seven other accused appeared in court earlier this year, they were served with the indictment, signalling that the state was ready to proceed with the case.

Hawks spokesperson Brig Hangwani Mulaudzi also welcomed the conviction and said it will send a strong message that law enforcement officers have a strong case against the seven other accused.

Mulaudzi said investigations relating to VBS continue and there was likely to be more arrests.

Their trial will continue on Thursday.

The story of VBS Mutual Bank really starts with a group of friends in the late 1990s at what was then the Rand Afrikaans University (RAU).
Opinion & Analysis
6 months ago

The VBS financial statements painted a rosy picture while the bank was in actual fact insolvent.
News
9 months ago

ANC secretary-general Ace Magashule says he has instructed his lawyers to contact the National Prosecuting Authority to verify rumours of his pending ...
Politics
6 months ago
Next Article