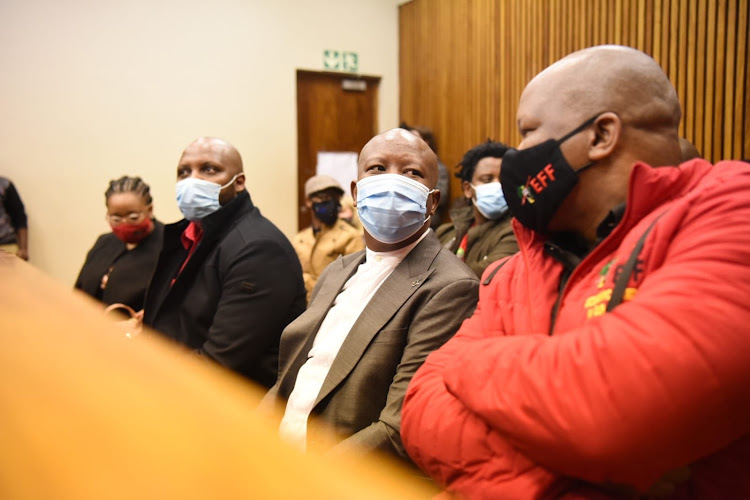 Julius Malema appeared in the Randburg magistrate's court on Tuesday facing a charge of common assault, along with Mbuyiseni Ndlozi.
Image: EFF South Africa via Twitter

The case against EFF leader Julius Malema and MP Mbuyiseni Ndlozi has been postponed.

Malema and Ndlozi appeared at the Randburg magistrate's court on Tuesday, each facing a charge of common assault.

Their case was postponed for trial on October 28 and 29.

LISTEN TO WHAT HAPPENED:

Court proceedings were delayed to allow the media to bring an application to allow for live streaming of the proceedings, and to be allowed to take photographs and record the case.

Malema and Ndlozi are accused of assaulting a police officer in 2018 at the funeral of struggle stalwart Winnie Madikizela-Mandela.

Outside the court, hundreds of EFF supporters clad in party regalia were chanting songs, in support of their leaders.

A sea of EFF supporters turned up in support of party leader Julius Malema and Mbuyiseni Ndlozi at the Randburg magistrate's court on October 13 2020. The pair faces assault charges relating to an incident that took place at the funeral of struggle stalwart Winnie Madikizela-Mandela in 2018.

Forcing us to come to court was irresponsible, says Julius Malema

EFF leader Julius Malema, who risked arrest had he failed to appear in the Randburg magistrate’s court on Monday, said it was irresponsible for the ...
News
1 year ago