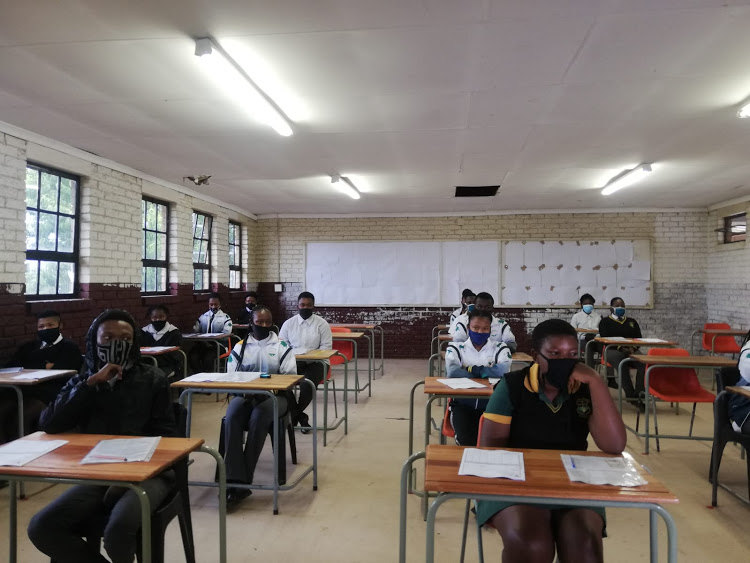 Matrics in five provinces tested positive for Covid-19 on the first day of their final exams.

This is according to the basic education department, which said on Thursday that there were no major issues reported as matric pupils sat down for the first day of the final examinations.

The department said all the positive cases were handled well and within health and hygiene protocols as stipulated by the health department.

Basic education minister, Angie Motshekga said three pupils in KZN reported their diagnosis to the school authorities and used a separate gate to enter the school premises. They were accommodated in a separate isolation room and provided with an invigilator who observed the health and hygiene protocols at all times.

“We are encouraged by the level of maturity and responsibility shown by our candidates in KZN”, Motshekga said.

Earlier on Thursday, Motshekga, accompanied by Gauteng education MEC, Panyaza Lesufi, visited Sekano-Ntoane Senior Secondary in Soweto for monitoring purposes and they both expressed satisfaction with the level of preparedness shown by the school authorities and the enthusiasm of the candidates.

“Our monitoring gives us confidence that with the successes of day 1 around the country we are set for a great examination period”, said Motshekga.

The health and hygiene protocols observed during examinations include the invigilator sitting five metres from the pupils in a well-ventilated room. Upon completion of the examination, the invigilator uses latex gloves to put the answer sheet in a sealable plastic bag. The plastic bag is then sanitised and put in a jacket with the rest of the batch.

The department has appealed to parents and communities to continue supporting the Class of 2020 throughout the examination period.

The basic education department has made a U-turn on its decision not to allow matric pupils who tested positive for Covid-19 to write their final ...
News
1 year ago

Basic education minister Angie Motshekga is set to monitor the start of grade 12 final examinations on Thursday, starting with a visit to Soweto.
News
1 year ago

The department of basic education is on track with its preparations for the largest ever matric exams, which start next Thursday.
News
1 year ago