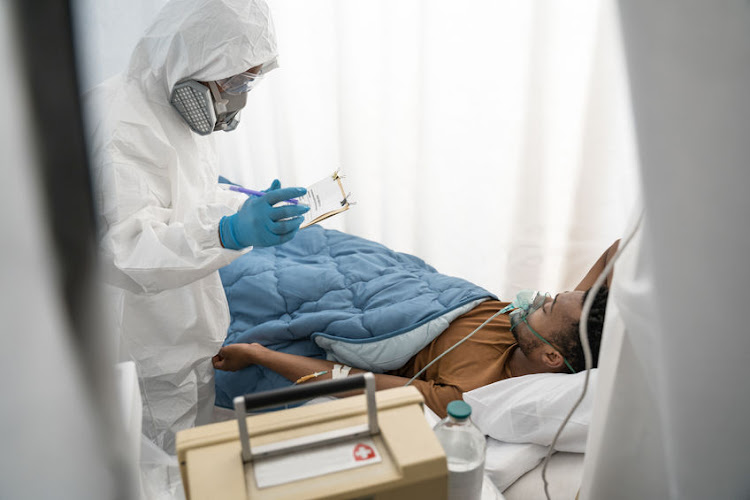 SA has ramped up available liquid oxygen to hospitals by roughly eight times ahead of the third wave of infections, says Prof Ian Sanne, a member of the Covid-19 ministerial advisory committee.

Oxygen shortages threatened and compromised the treatment of critically ill Covid-19  patients during the second wave.

“SA has an oxygen production capacity approximately eight times the rate at which oxygen is used in winter months without Covid-19. This amount will be sufficient to support hospitals that may face a rapid increase in patients in the third wave,” said Sanne.

He said hospitals would be monitored to ensure their oxygen levels did not fall below 50%.

“Cylinder oxygen supplies to district hospitals have been doubled, with the addition of approximately 6,000 cylinders. Within the department of health, additional monitoring and resupply capacity has been added,” said Sanne.

“SA is well prepared to ensure oxygen demand will be met during the third wave.”

The third wave of Covid-19 has taken hold and could be significantly worse than the second, experts told the Sunday Times.
News
11 months ago

New cases of Covid-19 reported a day exceeded 4,000 at the weekend, nearly a third of the number reported at the peak of the second wave.

At the peak of hospitalisations, SA consumed six to seven times more than its normal “background” use of liquid oxygen, but the supply available was only fourfold the normal use, said Sanne.

During December and January, industrial oxygen had to be converted to medical oxygen, and was transported over long distances.

SA’s demand for oxygen triggered shortages in Eswatini and Zimbabwe, which rely on the same industrial plants, and this could happen again said Sanne.

The true number of Covid-19 infections could be 15 to 20 times higher than those reported, said Sanne, an infectious diseases specialist who heads Right to Care, a health organisation at the Covid-19 front line. He said most cases are asymptomatic and go undetected.

We are all sick and tired of Covid-19 but the virus thrives on our fatigue.

The vaccination of roughly 500,000 healthcare workers since February was expected to bolster them against severe disease and death in the coming wave.

More than 8,000 health workers have been admitted to hospital during the pandemic, making up 3% of total hospitalisations.

The current admission of health workers is 1% of the total, according to recent National Institute for Communicable Diseases (NICD) hospitalisation data.

More than 24,500 healthcare workers in rural Eastern Cape were among those who received Johnson & Johnson (J&J) Covid-19 shots under the Sisonke implementation study which wrapped up mid-May, said Sanne.

“They have a sense of confidence after vaccination. We are seeing some breakthrough infections but they are probably less severe.”

The third wave is pushing up hospital admissions, and some hospitals are already feeling the Covid-19 load, while others are preparing for the next surge.

“A number of hospitals have opened additional wards and ICU beds, and others are full. Charlotte Maxeke [Hospital] played a substantial role in providing treatment and its absence is going to add pressure in Gauteng,” said Sanne.

A doctor at Groote Schuur Hospital in Cape Town said: “We are trying to keep everything going while preparing for the next wave and we are watching cases slowly increase. It sounds like Gauteng is becoming busy faster than us this time.

Sanne said SA’s infection curve looked exactly like the Eastern Cape’s curve upwards in November. The province was nearly overwhelmed at its peak, two months before the rest of the country was hammered.

“The Eastern Cape is much better prepared than in the second wave. The major health facilities have enhanced infrastructure and there have been very substantial changes,” said Sanne, commending this approach over building “white-elephant field hospitals”, as Gauteng had done.

Also president of the SA Medical Research Council (SAMRC), she said of the third wave: “The hospitals are starting to get full again but it’s impossible to predict what will happen.”

Wits University and Boston University associate Prof Dr Gesine Meyer-Rath, from the SA Covid-19 Modelling Consortium (SACMC), said: “Infections have increased across all provinces. This will likely continue to increase depending on how well people can maintain social distance, especially refraining from gathering in unventilated areas indoors, and wearing masks.

“We are all sick and tired of Covid-19 but the virus thrives on our fatigue. It remains important to regularly monitor trends in cases and admissions. The SACMC Epidemic Explorer can be used by the public to assess Covid-19 risk in any district and sub-district in the country.”

Sanne said: “I support the president’s call for the more stringent implementation of social distancing and masking, and the reduction of social, religious and other gatherings, as we need to pay attention now to avoid a difficult winter in the middle of the third wave.”

President Cyril Ramaphosa warned "it may only be a matter of time" before the entire country enters the third wave of Covid-19 infections.
News
11 months ago

‘Pandemic fatigue’ returns SA to level 2, but let’s not give up, urges Ramaphosa

While the vultures circled, both my parents passed away

For those who have suffered personal loss, reports of Covid corruption are deeply painful, writes Sam Mkokeli.
Opinion & Analysis
11 months ago