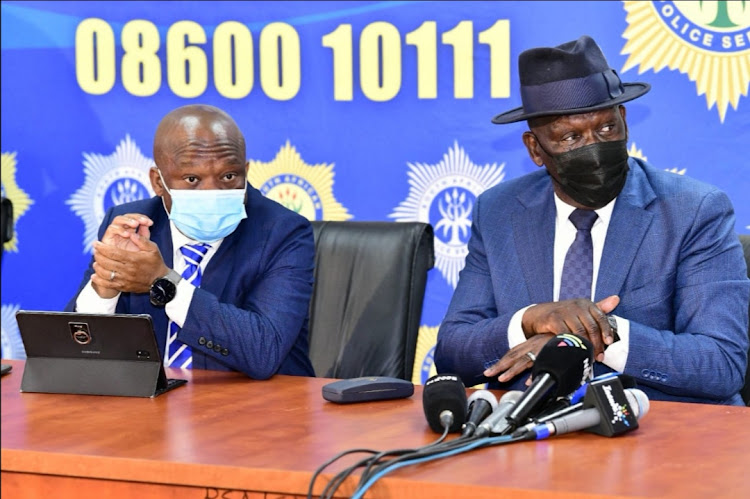 Police minister Bheki Cele revealed at a media briefing in Durban on Tuesday that a possible “big fish” in the instigation of the deadly violence and looting that gripped KwaZulu-Natal and Gauteng recently has been arrested.

Cele and KwaZulu-Natal premier Sihle Zikalala were at the Inanda police station to provide an update on matters related to the violence that played out in Phoenix recently, amid the widespread looting and civil unrest.

He said the number of people that died there had risen to 36.

Touching on the issue of the alleged instigators of the unrest, Cele said: “The last figure given by the national commissioner to the portfolio committee two to three days ago is that we have arrested 11 of those people [alleged instigators].

“As I was sitting with the premier here, I have been given another name which might be one of the big fish ... That person has been chased by the police for some time. He appears on many platforms calling for this violence.

“He has been arrested, I think this morning, which I guess will take us forward to break other platforms of the people that have come together.

“The last figure was 11, somebody has been arrested and there are other names that we are looking at to come and answer on both instigating fake news and making sure that trouble continued.”

Cele also provided a detailed report of the situation in Phoenix, including that 36 people lost their lives in the area — 30 of whom were shot.

“Two were burnt to death. One was stabbed and another was run over by a motor vehicle. Two others died from the brutal injuries they sustained after being assaulted.

“In total, police are investigating 52 cases of attempted murder and probing nine cases of common assault and 16 cases of assault GBH,” he said.

He said the problem in Phoenix started “when some people operating the checkpoints turned to vigilantism and started racially profiling people, preventing them entry into the suburb.

“This amounted to unlawful discrimination and a restriction of movement for mainly African people.

Irrespective of gender or age, some motorists were allegedly forcefully taken out of their vehicles and then assaulted with baseball bats, bricks and sticks.

“According to police reports, a vehicle with no registration plates, carrying looted items, was stopped and searched at one of the checkpoints. Four male occupants of the bakkie fired shots at community members and the community returned fire. The four suspects fled into the bushes.

“The shoot-out resulted in four African males sustaining gunshot wounds. One of them died on the scene. Their vehicle was set alight.

“This incident, we believe, sparked other incidents of stoning and burning of vehicles and further violence including shootings, stabbings and assaults.

National youth task team (NYTT) member Sizophila Mkhize says she is yet to be served with formal communication regarding disciplinary action over ...
Politics
9 months ago

“Irrespective of gender or age, some motorists were allegedly forcefully taken out of their motor vehicles and then assaulted with baseball bats, bricks and sticks. Some people were even butchered with bush knives and other sharp instruments,” Cele said.

“I want to be very clear about this: what happened in Phoenix were criminal acts of the worst kind which also took a racial turn. These acts have no place in our society and the perpetrators will be arrested and prosecuted.”

Cele said a team of 31 experienced detectives from both provincial and national levels have been “deployed to investigate, make arrests and attend court cases to ensure justice prevails.

“Working closely with the communities, their investigations have led to the arrest of 22 suspects so far.

“Some of these suspects are allegedly connected to several murder cases, while others face charges relating to attempted murder, malicious damage to property, and defeating the ends of justice.

“All suspects are currently going through the court processes with some appearing in court for the first time this morning.”

Cele said the team was also investigating the role of private security firms in the violence.

“Working closely with the Private Security Industry Regulatory Authority (PSiRA), the team of investigators has seized 152 firearms from four private security companies working in the area, 112 illegal firearms have also been seized during police operations in Phoenix.”

He said while calm had been restored, “we remain on high alert”.

The son of a prominent Phoenix pastor is being investigated by police for allegedly being in possession of some of the 1.2-million rounds of ...
News
9 months ago

Zikalala said the increased visibility of police and the military has “added to the stability and allowed the economy to move.

“We are still assessing the impact of the civil unrest and are compiling our comprehensive report to the National Disaster Management Centre.”

Zikalala said the current estimated cost of damages and relief required for the sector departments stood at R2bn, while damage to municipal property amounted to R74m.

“The interim financial implications for the organs of state is R2.1bn,” he said.

“These figures are not final and are expected to grow. We can confirm that with the work done so far, the situation is beyond the provincial and municipal capacity to deal with the cost of public riots and unrest as reported.

“We have therefore recommended to submit for classification to the National Disaster Management Centre in terms of section 23(1)(b) of the Disaster Management Act. The declaration of a provincial state of disaster will support the reprioritisation of budgets to implement the repairs and recovery programmes.”

Over 200 businesses join ActionSA's lawsuit against Ramaphosa and ANC — Mashaba

ActionSA leader Herman Mashaba says his party will be suing President Cyril Ramaphosa and police minister Bheki Cele over the damage to properties ...
Politics
9 months ago

Twitter has taken action against former president Jacob Zuma's daughter Duduzile Zuma-Sambudla for sharing clips of the unrest in KwaZulu-Natal on ...
News
9 months ago